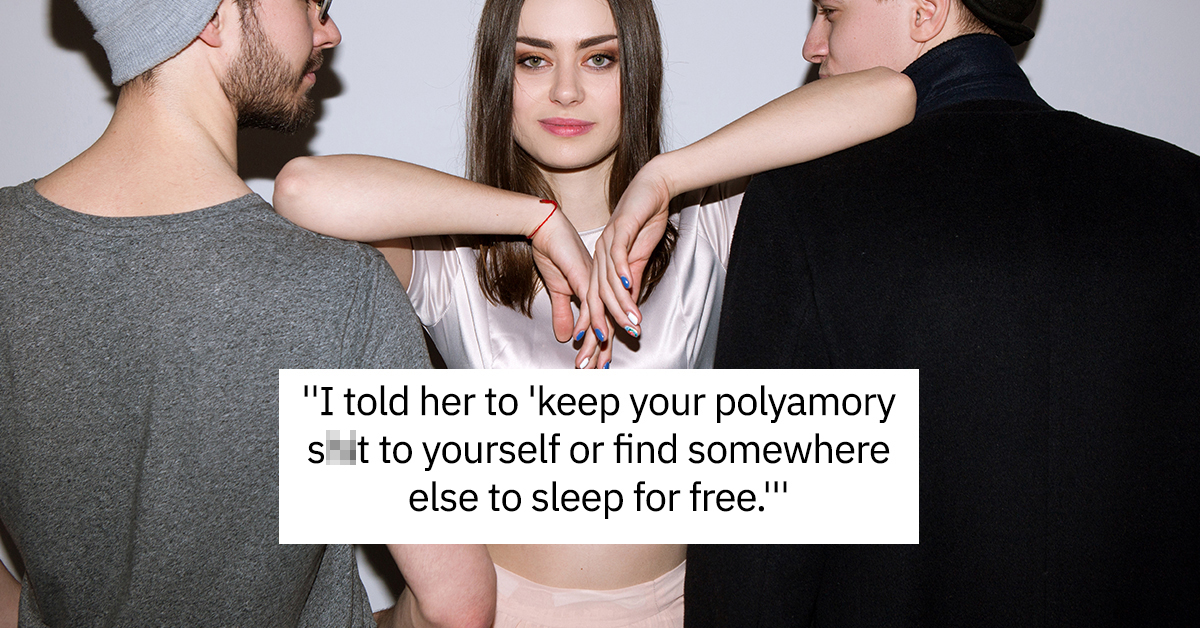 The COVID-19 pandemic has created a lot of unusual living situations—some more harmonious than others.

On Reddit, one reluctant host is experiencing the chaos that comes with a rude houseguest—a polyamorous friend who is angry she cannot bring her five partners over due to the OP’s concerns about staying healthy during a pandemic.

One night, they got into a fight over the friend’s constant preaching about her superior lifestyle, and the OP threatened to throw the friend out. Was she acting over the top? Or did her friend cross a line?

“My friend Emily is staying with my husband and I for a week. She was evicted from her apartment after an incident with her ex boyfriend, and she had just two weeks until her new lease started and nowhere to go, so she’s staying on our apartment,” the OP writes.

“One of the house rules I gave her was no visitors/partners. Emily is poly, and she has 5 current partners, and when I told her none would be able to visit (as I am an asthmatic and am trying to stay safe) there was a lot of complaining. Twice she compared her experience of me not allowing a visit from her partners to homophobia, which pissed me off because I’m queer and she’s straight, and that’s a hell of a thing to accuse a queer person of.”

“Next came the ‘discussions’ as to why monogamy is ‘morally wrong.’ These happen almost every night at dinner, when my husband and I have finished a long day of work. We are at our dinner table and have to be lectured by a houseguest as to why monogamous relationships defy nature, how they’re all destined to fail in a pile of cheating and jealousy, and how much more enlightened poly is. I have no problem with poly, but I just see it as a preference, not an inherently better relationship model,” the OP explained.

One night, the OP had some wine and pulled out her wedding album. She was looking through the pictures with Emily and pointed out her favorite, when Emily said, “yeah, it’s cute, but it’s kind of a lie to promise a lifetime to someone. It’s just not realistic.”

The OP blew up and told her to “keep your polyamory sh*t to yourself or find somewhere else to sleep for free.”

They haven’t spoken since.

“I just can’t take the condescension and lectures in my own home. Am I crazy? We are doing her a favor by letting her stay with us and she’s even been eating the meals I cook! Am I being a rude and controlling host?”

On Reddit, people had a lot to say about what it means to be a good guest and respect boundaries.

“She is a guest in your home, if she cannot abide by your rules and respect you then she can find another place to crash at until she can go somewhere else. You are indeed doing her a favor and she should be grateful for that instead of complaining at every turn,” said EntranceShadows.

“If you were saying how all poly relationships are bad and will all fail and are morally wrong, she would have been upset and rightfully so. So why is it okay when she does it to you? Also not wanting to be exposed to 5 other people during a pandemic isn’t homophobic its responsible,” said oneandonlycmj.

“It’s a global pandemic. 5 different people who have interacted with 5 different people, so on is how this virus spreads. Monogamy may not be ‘natural’ but it is a choice only the person making it can decide, just as being poly is, she needs to keep her opinion to herself as she isn’t considerate and is completely bias and seems to think only her way of life is right,” noted AmyBaby-96.

“I believe that people can hold their own views on this sort of stuff, but saying that their way of life is ‘morally right’ or ‘the only way to go’ is crossing the line. As always if generally recommend a civil discussion on this topic over starting an argument, but I understand that in the heat of the moment we can all be a bit meaner than we’d like to be, and sometimes people simply don’t listen unless you change your tone,” bobbster574 said.

“For real, if she has five partners why can’t at least one of them house her until her new lease starts? If all five of them took her in for 2-3 nights each she wouldn’t even have to miss any of them,” observed kaleighdoscope.

What do you think? Is the OP being unreasonable? Or has her houseguest stayed well past her welcome?