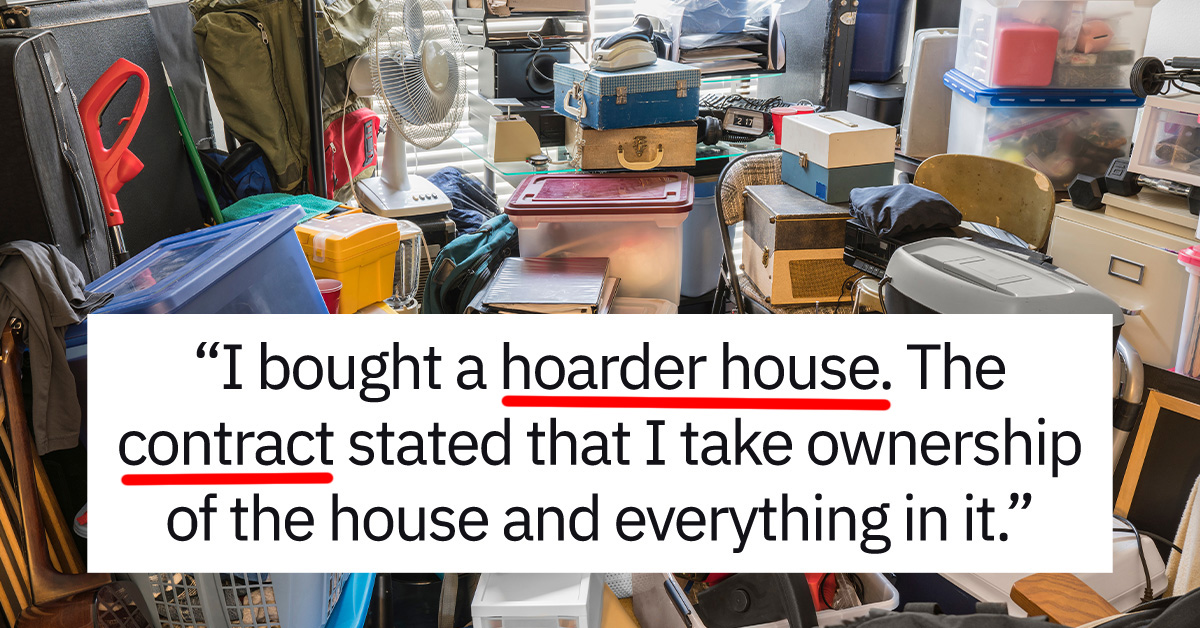 Buying a new house is exciting, but you also inherit whatever mess is left behind by the previous owner.

One Redditor recently purchased a house that was previously owned by a hoarder. After spending years cleaning up the house after the sale.

While cleaning, the new owner discovered thousands in cash, a wedding dress, and jewelry, that the family now wants back.

According to the OP, the contract under which the home was purchased, states she’s entitled to everything inside so they should’ve cleaned the house up themselves before selling.

The woman spent 4 years cleaning up the previous owner’s mess which was left behind by their heirs.

Now she’s turned to the popular subreddit “Am I The A**hole?” (AITA) to find out if she’s wrong for keeping the items. Here’s what she said:

AITA for refusing to give this woman her grandma’s wedding dress and jewelry back?

When I bought it, the contract stated that I take ownership of the house and everything in it. The lady who owned it died, and her heirs could not deal with the stench and literal mountain of junk and waste in it (you could only open the door not even 8″, and some rooms had the junk filling them wall to wall and floor to ceiling).

Well, it took me these last 4 years to finish cleaning, fixing, and updating it. While doing the cleaning I made sure to check everything before throwing it out. Ended with more than $20k of money, some nice jewelry, and antique furniture, and finally a stunning 40s style, lace-covered wedding dress. This woman took care of that dress until she couldn’t anymore, and it took just some minor work to restore it.

I currently don’t have a partner, but I decided that it would be the dress I will be wearing if I ever get married.

While doing the cleaning, I reached out to the heirs to pass on some pictures and mementos (Christmas personalized ornaments, some kid artwork…), and because of that, I had one of them (30s F) on my FB friends list.

After repairing the dress, I put it on with the jewelry and posted a pic on FB. Well, this woman saw it and asked for the dress and heirlooms back.

I refused to give them back, and legally they can’t do anything. Also if they meant that much to them, they should have cleaned the house on their own, not sold it to me.

Now she, and all her family, is calling me out on social media. AITA?

Former hoarders and relatives of hoarders share their perspectives on the situation. Here’s how commenters reacted: 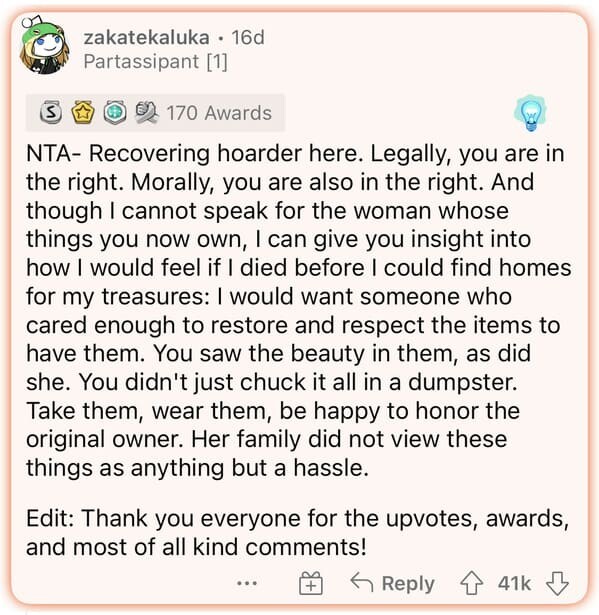 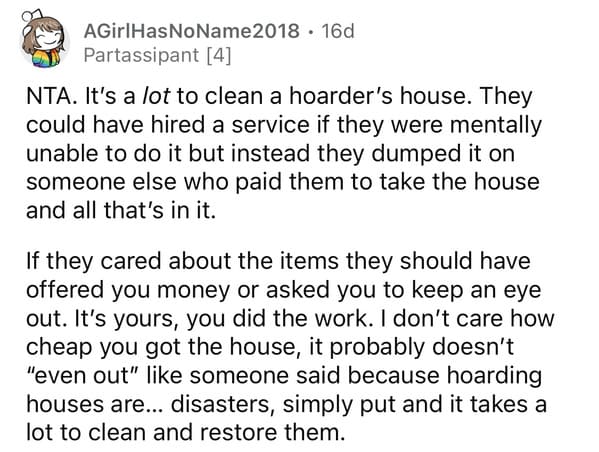 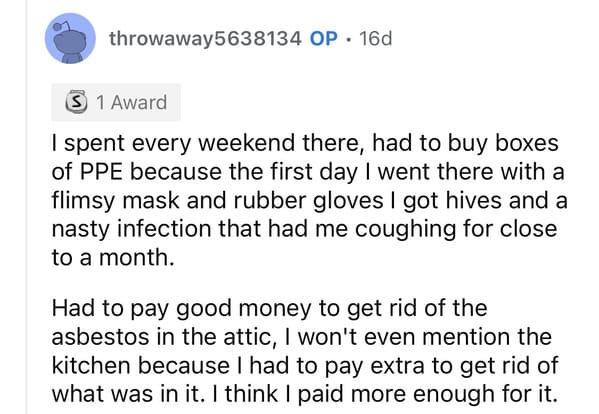 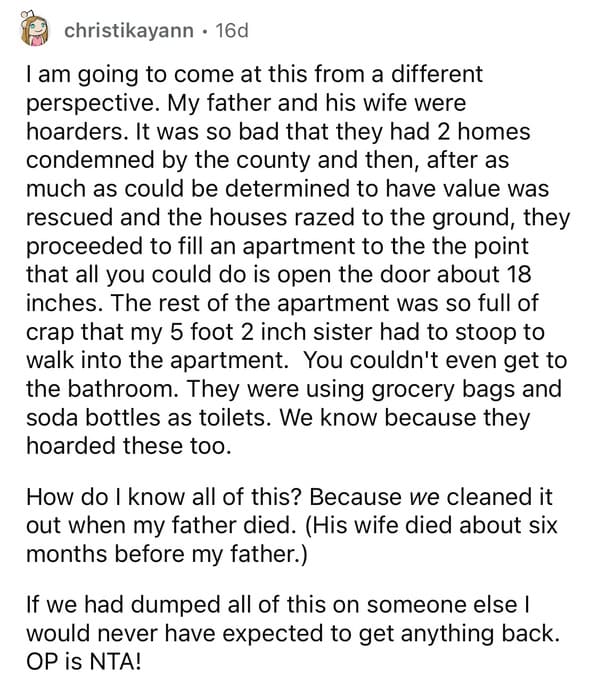 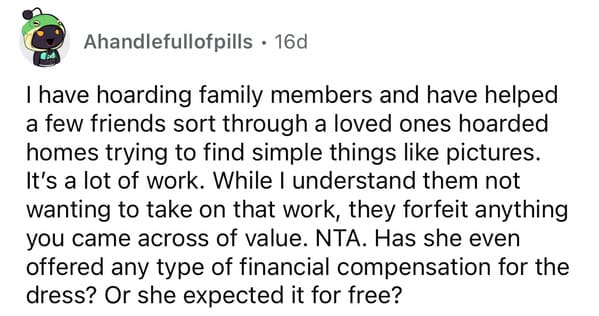 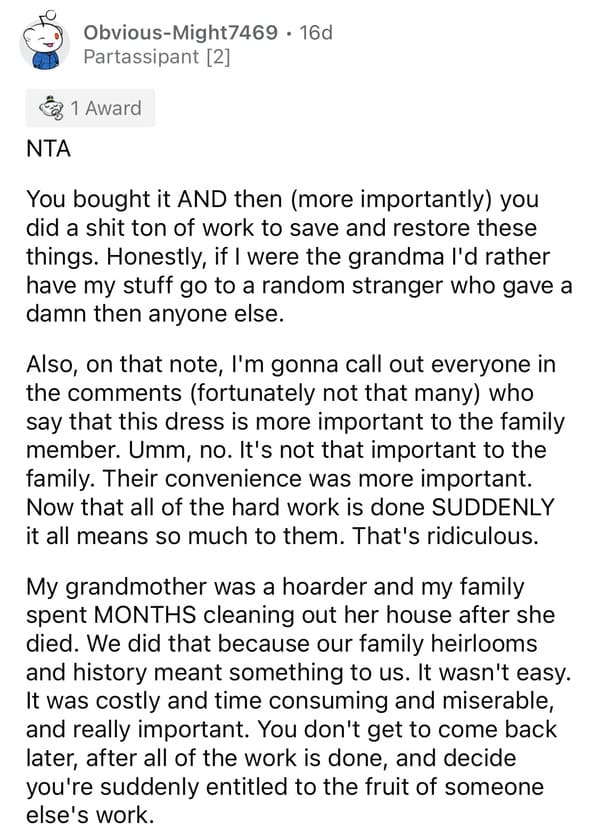 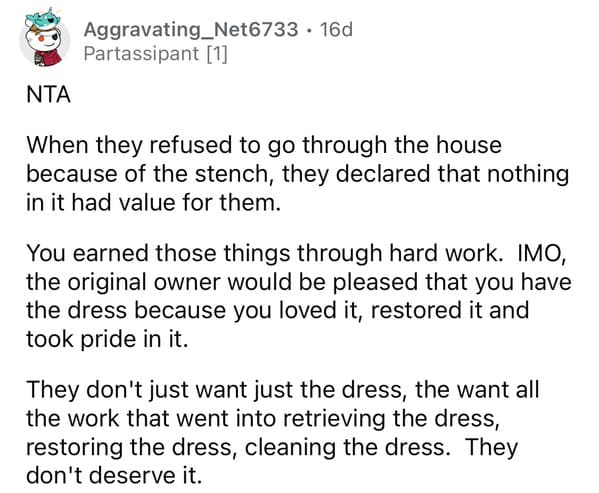 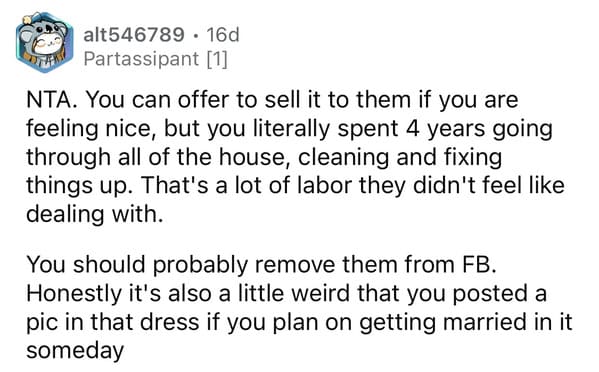 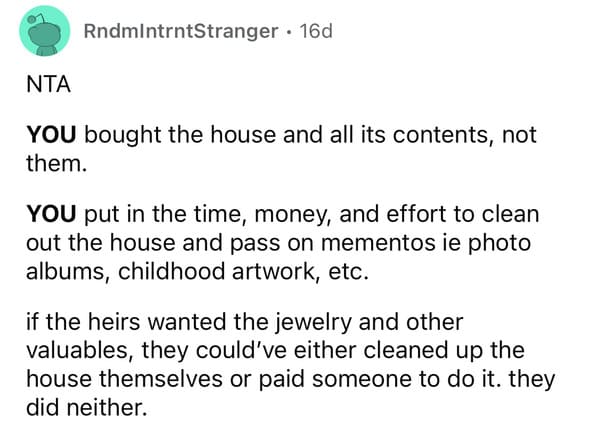