Sometimes you read a story on r/AmItheA**hole and want to reach through your computer screen and shake the poster until they see sense. That’s basically what everyone feels about user u/whosedogisitanyway who shared their story under the title, “AITA for refusing to return a lost dog that was clearly well-loved?”

The title alone is enough for me to say, “YES, ABSOLUTELY!” But the whole story is even worse.

The OP says seven months ago they took in a lost dog. To be fair, they took them in to a vet to see if they had a microchip and there was none. The vet listed the dog on a website and no one claimed her, so the OP was given the all-clear to adopt. The dog had recovered a shiny coat since being cared for, and the OP says she helps with their anxiety and is “honestly the light of my life.”

Then a month later, the OP joined a Facebook group for the breed of their dog, because it is apparently somewhat unusual. They post a photo and a woman was tagged, who DMed the OP, saying it was actually her dog. She offered to pay the OP for their care and wanted to arrange to come and get her dog.

I thought she was trying to scam me since she lived across the country but when I looked into it I found her IG with alot of dog pictures and videos. My dog has very unique markings so it was unmistakeably the same dog as the one in her pictures. My dog is a show champion and had a lot of training to do obedience, agility and a few others I’ve never heard of. She has alot of fancy titles too. My dog was clearly well cared for, well trained, and well loved.

She said her house caught fire last year and she lost everything, including my dog who ran away. Nobody knows how she traveled so far or what happened between when she got lost and when my friend found her. She never stopped looking for my dog.

The woman showed the OP proof she’d had the dog microchipped because sometimes they malfunction or are lost. She even shared a video of the dog “as a super cute puppy getting a microchip.”

At this point, any normal, decent person would admit that this dog was someone else’s, someone who had invested an enormous amount of time, love, money, and energy into their pet and lost them under tragic circumstances. Not the OP:

Here’s the part where I might be TA.I  told the woman I appreciated the great job she did with my dog for the first few years of her life (she’s 5) and I was sorry to hear about her circumstances but I couldn’t give up my beloved girl. She’s my support animal so I’m not even sure I could live without her. I offered to send her pictures regularly but she turned really nasty. I got tons of hateful messages from people I don’t even know.

I had panic attacks whenever I got notifications because her friends acted like it’s my fault. I didn’t choose for this special dog to change my life so much anymore than she chose for my dog to get lost. I ultimately blocked her because she wouldn’t leave me alone.

For some reason, the OP doesn’t understand why the woman might be nasty about having her dog kidnapped. They think because the dog had no detectable microchip and they went through teh hold period, they are in the right.

They write, “I am legally in the right but am I morally wrong? I know she loves my dog and wants her back but I can’t picture a life without her. Not one where I’m happy anyway. If I could clone my dog and give this chick one I would.”

I’d honestly love to see what would happen if the OP let the dog decide. I guarantee that the dog would choose the woman that spent five years training and pampering it, not this random person who piles anxiety on top of it. This is not an official service dog in any way. It is not moral to keep the dog. And that’s what everyone else said, too: 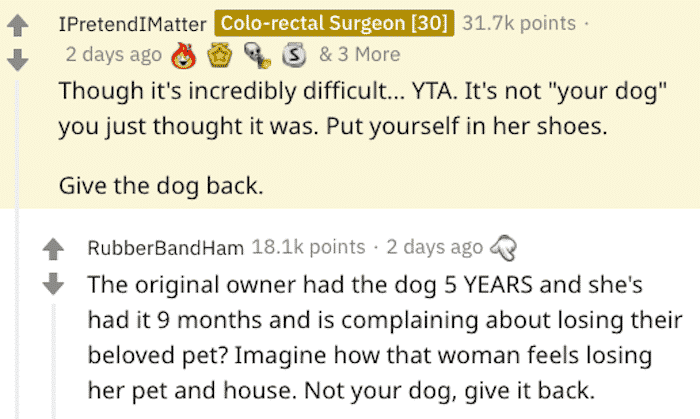 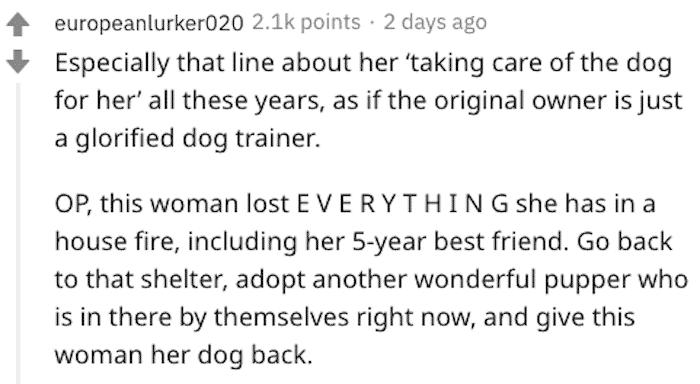 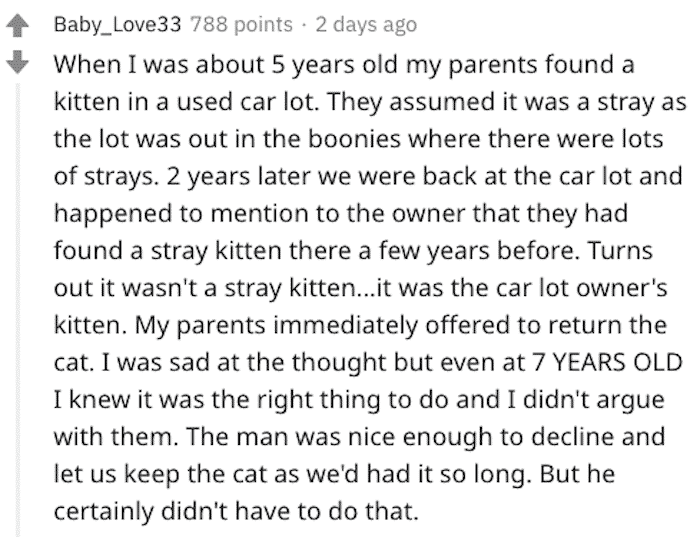 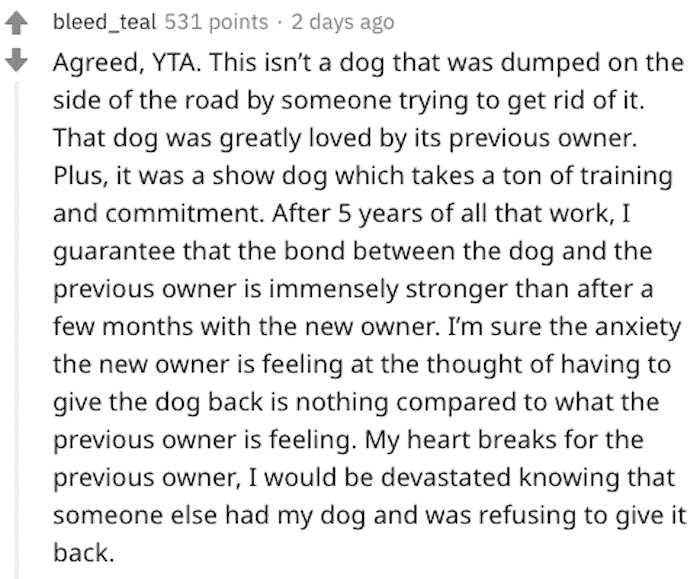 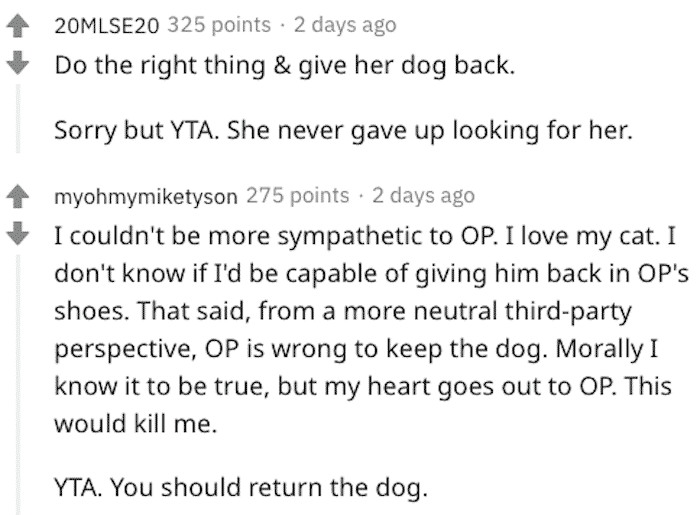 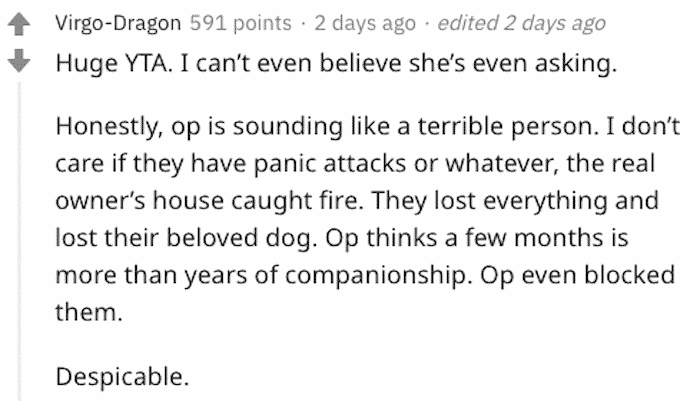 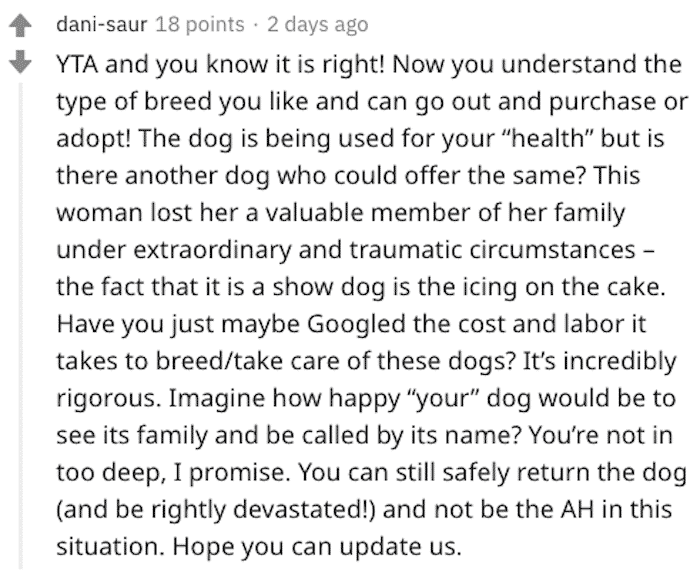 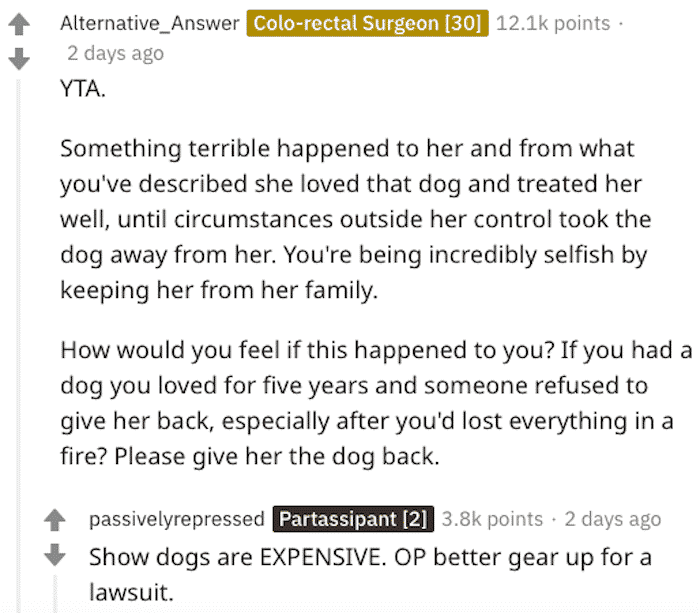 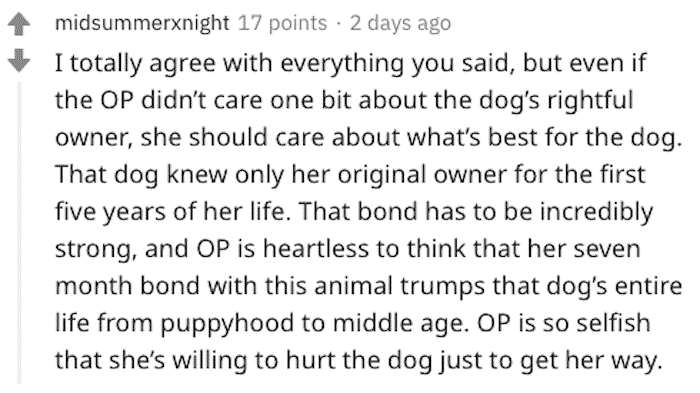 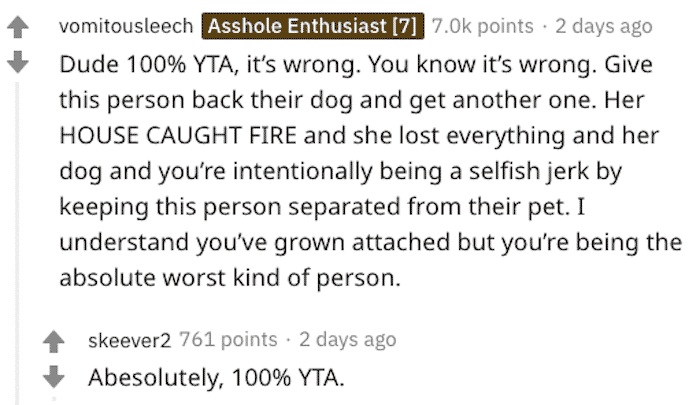 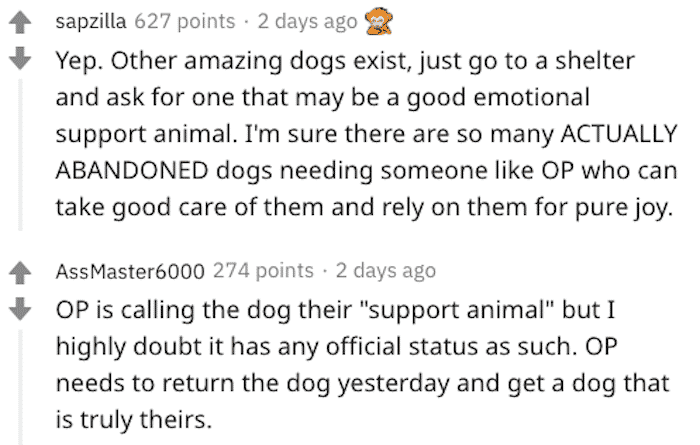 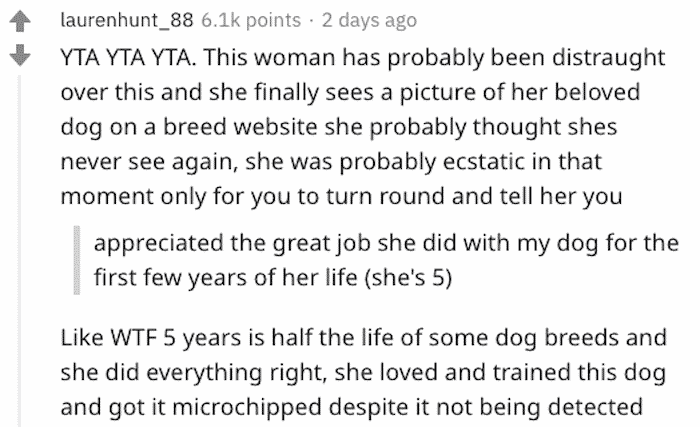 I doubt we’ll get an update from the dog thief, but I’ve never hope that someone was a Karen so bad. I hope the dog owner’s bites the OP’s ass with a lawsuit.