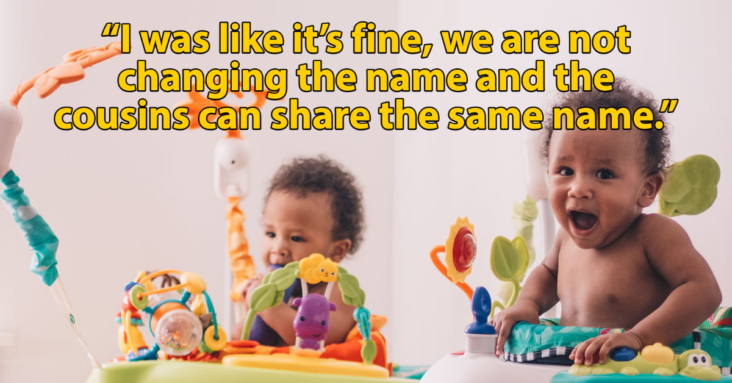 There’s so much drama over baby names — heaven forbid the same name exists in the same family.

People “claiming” baby names is kind of absurd, although it can be disappointing if someone in your family infringes on what you consider to be yours.

That’s the issue with one family who explained on Reddit that they feel their baby’s name was stolen unfairly.

“I had my son a month ago. We had his name chosen early in my pregnancy. It’s a double honor name which kind of came from a unique place (we had two people we wanted to honor, we didn’t go with direct names but names that tied to the people and we happened to truly love the names). We announced the sex and the name in a FB post in April with a blanket that had his name embroidered on it,” the OP writes.

The next week, the OP’s SIL announced that she had given birth (apparently nobody knew she was expecting) and named her son the name the OP had chosen.

“It was awkward. My ILs all asked her what she was thinking. She said she got to give birth first and loved the name so what was the big deal. My husband thought she was nuts and told her she was a dick for thinking she had ‘claimed’ the name now. She said it wasn’t her fault she got there first. I was like it’s fine, we are not changing the name and the cousins can share the same name.”

After the OP’s son was born, she and her husband did in fact name him the name they intended to all along. This made her SIL irate, and she texted everyone in the family complaining about how awful this was and how “petty and nasty” she was for “stealing the name after she used it.” She said the OP is an a**hole to both her and to the children.

“She’s delusional, NTA. The fact that you stuck to your guns showed that she had ill intentions by picking that name. She was playing chicken and obviously hoped that you’d choose something different…now she’s pissed you didn’t flinch,” said crayolainmybrain.

“NTA. It’s not that big of a deal. I’m sure there are many other children with the same name too. The fact that she’s totally irate about it shows that this has nothing to do with ‘hurting the kids.’ How tf does that hurt the kids anyway? Maybe it could inconvenience them at some point if they share both first and last name, but certainly doesn’t hurt them,” said MarketingManiac208.

“I would get some fish, a dog and a turtle and name them all this same name. Announce a new animal weekly with this name. Power move time, OP. NTA,” said lotsofcache.

“Petty move on her part, and good for you for sticking to your guns. The kids will be fine. It’s not like having the same name is going to traumatize them,” said alimck476.