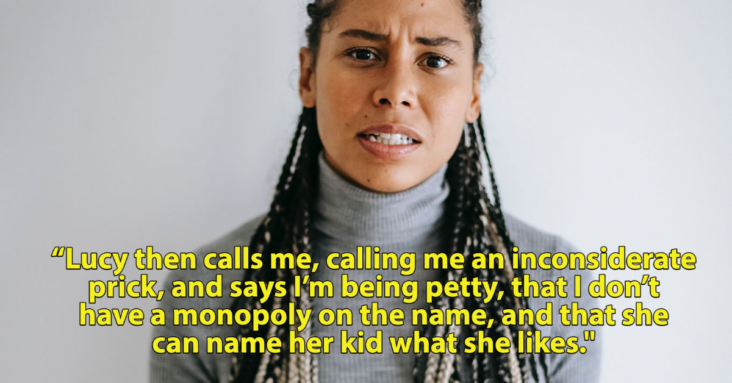 Choosing a baby name can be one of the hardest decisions to make. It’s a big responsibility—and hopefully something you and your child will not get sick of as the years go on.

Some people choose to name their child after a family member who has passed, as a way of carrying their memory on. But what happens when two siblings who are pregnant are vying for the same name?

On Reddit, one woman believes her sister stole her baby name and is wondering why the kids can’t just have the same name.

“I have a 9-year-old daughter, and another on the way. I had two grandmothers: ‘Annie’ and ‘Rose.’ I named my oldest ‘Annabelle’ after nanny Annie, whose full name was also Annabelle. I did not name her after nana Rose as at the time she was born, Nana Rose was still with us. When I found out I was pregnant with a second, I decided to name her after Nana Rose, who passed in 2017.”

“My sister ‘Lucy’ got pregnant about 5 months before me. She says that she wants to name her baby Rose, after Nana Rose. I say our kids can share the name. She says I already have Annabelle, and I could have named her Annabelle Rose or something but passed up the chance, so I can’t also have Rose. I figure this is not the hill to die on, so I say I’ll look for something else, but reserve the right to use Rose. I then crack open a baby book, and a few entries after “Rose” is “Rosalie”. It’s perfect. Honors Nana Rose, doesn’t piss off Lucy, and my boyfriend loves it. Lucy finds out the new name and says it’s lovely and she approves, which annoys me but I say nothing. This all takes place in the 8th month of her pregnancy, 3rd month of mine, so I don’t even know the gender yet and this is all hypothetical.”

A few days after Lucy gives birth, she makes an announcement: her daughter’s name is Rosalie.

The OP is really annoyed because she says she went through a lot to leave the name Rose available for her sister. The OP’s mom calls and says she knew the plan the whole time and hopes the OP is not upset because that means she can name her daughter Rose.

Well, now the OP wants Rosalie as the name.

“Lucy then calls me, calling me an inconsiderate prick, and says I’m being petty, that I don’t have a monopoly on the name, and that she can name her kid what she likes. I said that’s all true, so by that same logic I can use Rosalie. She says there can’t be two Rosalies, as it’ll cause problems, and I say she’s the one who has a problem with it, so she can change her kid’s name or deal with it. She again called me an inconsiderate, spiteful, arse, and hung up. Mum, dad, and our brother all side with Lucy.”

What did Redditors have to say about this situation? They definitely did not have too much sympathy with either sister.

“NTA but honestly your first mistake was giving in and negotiating with your emotional terrorist sister,” said 4thxtofollowtherules.

“I’m gonna be honest: the first argument of ‘Well you already have one child named after one grandmother, so you shouldn’t have both’ is really fair. Sure they both could’ve been Rose but the sister was pregnant again first. Everything past that was crappy though,” noted mr-prez.

“ESH. You and your sister are acting like children. I find it hard to believe that you all are adults having kids,” said GoldenNebulas.

“Ffs, you’ve honored one grandmother, she wants to honor the other. It’s sharing, like Day 2 kindergarten stuff. Your sister sucks just as bad, but you’re both being petty,” said TPrebs.

“Agree ESH – leaning toward more YTA – so rude to try to nick both Grandmas’ names, fake changing the name. The sister is further along than she is, she doesn’t even know the gender and she’s trying to corner the market. And hate the way this is written to manipulate the result. Also I was reading how horrible they both come across and waiting for the Mum to be involved…and there it was!! Probably been playing them for years,” observed tomdharry.

“Am I crazy for thinking OP actually is a real asshole for using/reserving both grandma’s names here and then picking something else so similar? Like she had her first daughter and named her after beloved grandma number 1 – surely she can therefore give her sister beloved grandma number 2’s name? It’s not like it’s some obscure name OP has found herself and then sister was like ‘cool I’ll name baby that’, it’s their grandma’s name and OP already got to use the first one. Plus sister’s baby was born first, yeah it’s kind of annoying she ‘stole’ the name if you wanna frame it that way but reserving names is just like… stupid in my opinion. They had the same idea but sister’s baby was born first so…It’s also not really choosing a different name to go from Rose to Rosalie, the idea that that is ‘great lengths’ is lolllll and makes OP seem pretty petty and dramatic herself. Saying ‘I’ll choose a different name’ and then going for Rosalie is 100% a spiteful move, let’s not pretend it’s not being consciously obtuse for the sake. Honestly OP you ARE an AH for monopolising sentimental family names imo, especially for a baby that was born after your sister’s baby – actually for a baby that hasn’t even been born yet,” said faroffland.