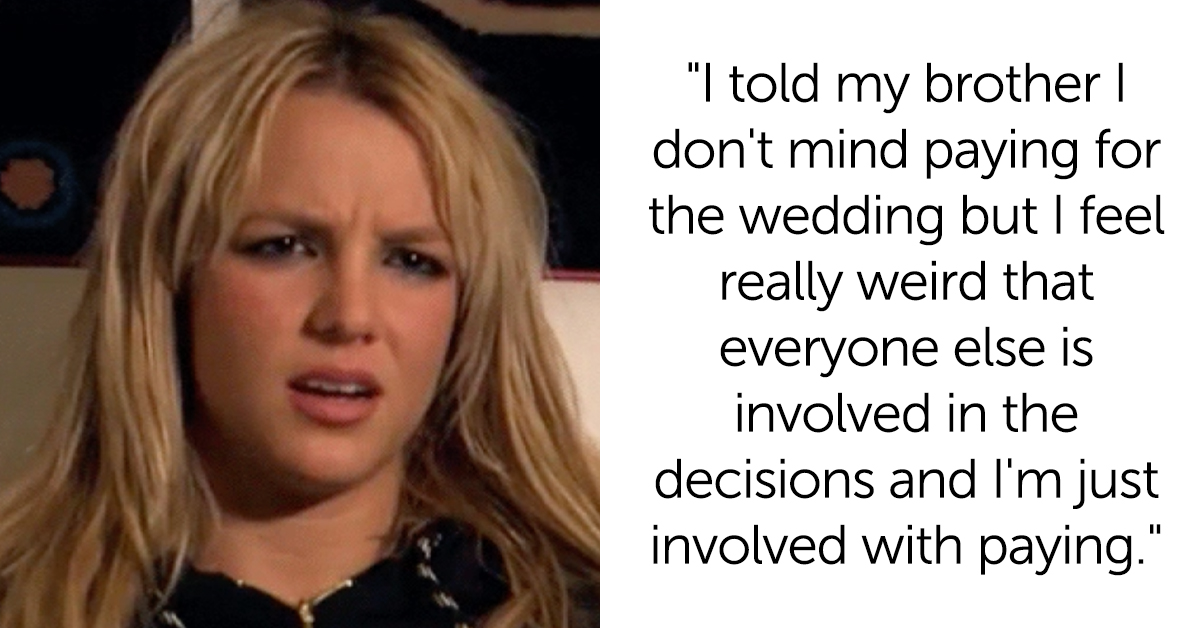 A lot of people look forward to their weddings, pretty much their entire lives.

And that’s fine and all, but personally, I think weddings can be a real hotbed of potential problems; they seem to inherently bring out some terrible traits in people.

They’re unnecessarily expensive, stressful, and the pressure is ridiculous. So hurt feelings are only too natural to follow in that kind of situation.

Read also: Model Claims She Got Booted From Friend’s Wedding Because She ‘Looked Too Good’

Here we have a post on Reddit’s AITA sub from u/Downtown-Bowler-8987 in which she wonders if she’s an ass for “being upset that I’m not involved in my brothers wedding which I am paying for?” And I’m already inclined to say, uh, probably no? but let’s read the actual post:

OP explains that she and her brother are the only remaining family for each other and that she makes significantly more than he does. So she tries to help him out.

Over the years I have paid for my brothers Masters degree, paid the down payment on his house (our parents rented, so there is no family home). I will also be paying for my future SIL (F26) and my brother to have future rounds of IVF. SIL works part-time and earns about 15k a year, her parents are not well off.

OP has taken it upon herself to buy him a degree, a home, and will pay for IVF. This is already insane to me, but god love her. She cares for her brother. Who… uh, seems to kind of treat her like a piggybank.

My brother asked if I could contribute to the cost of the wedding. I said I’d pay for it, as is is small with 100 guests, and set up a wedding account for them into which I put £25,000 which they both have access to.

Yeah. Like I said. He treats her like a bank. So OP goes ahead and throws in 25,000 British pounds after he asked her to help with the wedding. And how does the brother treat her?

SIL’s entire family are involved as bridesmaids and groomsmen. My husband and I are guests. Brother and SIL have been going around venues with her family, and I get emailed the costing if it’s selected.

She’s a guest. She’s barely involved. She gets bills. That’s it.

I told my brother I don’t mind paying for the wedding but I feel really weird that everyone else is involved in the decision and I’m just involved with paying. Brother has said that I’m not our parents, I can’t replace our parents and that’s why I’m not involved. Why can’t I just do something nice without making him feel shit. I feel like an asshole for causing drama, but also feel taken advantage of. AITA?

And when OP asked about it, said her feelings were hurt, the brother acted like a real dick. Ugh, I’m furious thinking about this! She offers a little clarifying info below:

UPDATE: This is in the UK, in Northern Ireland to be exact. 35k is a good salary. I don’t have student debt to pay off because I didn’t go to uni. I was in the military before becoming a commercial pilot. My brother’s salary will increase as at his company, he needed a master’s to progress beyond his current rung. SIL works part-time because she has a medical issue, she will never be able to work full-time because of this. Related – it is unclear if this is impacting fertility. In NI you get one round of IVF on the NHS which they did. They paid for two more at 8k each. SIL family paid for another and stipulated they wouldn’t be able to afford to pay for a wedding if that was the case. Brother and SIL have been emotionally through the wringer with fertility issues, it isn’t a cynical attempt to get money. For all of y’all talking about adoption, there is some serious BS about SIL’s illness meaning they aren’t “attractive candidates”. I am close with my brother but do pay for things we do together, he has really been there for me emotionally, especially during some personal problems I experienced just before and after I left the military, future SIL was too. They didn’t plan the engagement party, SIL family did and they didn’t invite me because my husband and I “are never available”, we just have jobs that have us moving around a lot. SIL and brother were horrified (no one told them we hadn’t been invited, they assumed we just didn’t show up) but that was resolved and we had a lovely meal together instead. My husband is supportive of our financial assistance, we are also helping his sister with her college costs (though why she had to go to the US when we have university educations that don’t cost an arm and a leg right here is beyond me – also any of you who have paid your way through an American degree – I salute you).

And admits that she’s not sure she’s actually helped her brother the way she wanted to all along.

I still don’t know what to do, but I do think maybe I’m not setting him up for success as I hoped, and also that I do deserve some recognition even if it’s just privately from him. Will keep you updated.

Reddit’s verdicts were pretty in line with my own reaction. Check them out:

I hope she does update people because I can’t wait to see how her brother and SIL react to her putting her foot down!