There are certain unwritten rules in marriage, and Redditor u/BranchLones broke a huge one: he made his wife feel unattractive. In front of their friends. For a game. And yet, he still came to r/AmItheA**hole for confirmation that his behavior was out of line, asking, “AITA for saying my wife wasn’t my ‘dream girl’ in a trivia game?”

The title alone doesn’t really convey the transgression here. In a healthy, monogamous relationship, there is still some awareness that your partner is going to be attracted to other people from time to time. That’s normal. How much you both talk about it with one another can vary, but in this instance, the OP surprised his wife with more awareness than she needed.

So my wife and I have been doing a game night every so often with some other couples via zoom since we can’t go out and see people lately. We were playing this card game the other night that was like basically a trivia game for couples to play and you are asked a question and you write down your answer and your partner has to guess what they think you answered. If they guess correctly your team gets a point. Whichever couples knows each other the best wins.

He says that the two of them have been doing game nights over Zoom with other couples, and one of the games is a trivia designed for partners to test how much they know about each other. You answer questions about yourself, and your partner has to guess and if they’re right you get a point. Whoever has the most points win. Simple enough! Until they fell into dangerous territory:

So some of the questions in this version were a little spicy and one of the questions was “Who is your dream man/woman to have sex with.” I wrote down my spin instructor, since my wife knows I think she’s hot, and thought she’d guess her and we’d get a point.

Well, f*ck me, turns out every other husband either wrote down their wife or a celebrity/fictional character.

My wife was livid, and upset. I tried to explain I didn’t actually want to do anything with my spin instructor and I would never even briefly consider being unfaithful, it was just me trying to play the game. She doesn’t believe me, saying everyone else’s instinct was women who didn’t exist or better yet, their wives. I feel really bad, but also really confused. I don’t know how to deal with this. Is she overreacting or am I an a**hole?

Buddy, she is not overreacting, at least based on the many, many comments telling this guy he should have known better. A spin instructor is someone you see on a regular basis, or at least did before everything was on Zoom. You could theoretically pursue her, unlike Angelina Jolie, who would absolutely not talk to you.

Plus, “dream woman” is a very loaded phrase. It sure sounds like he’s dreaming about hooking up with the spin instructor all the time, when put like that. 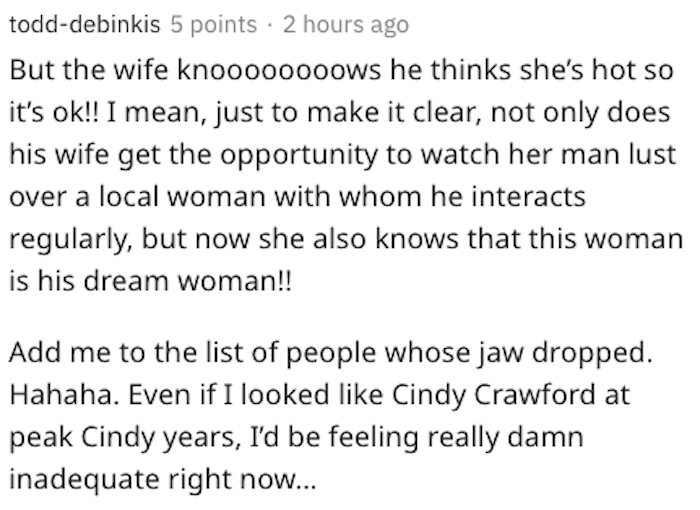 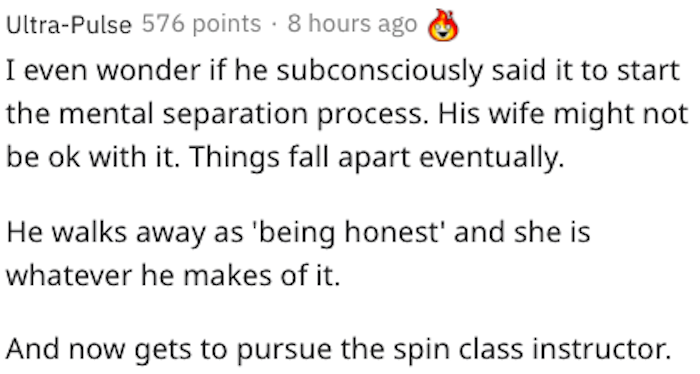 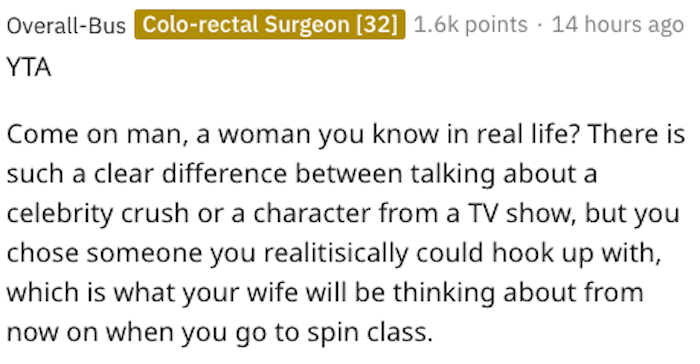 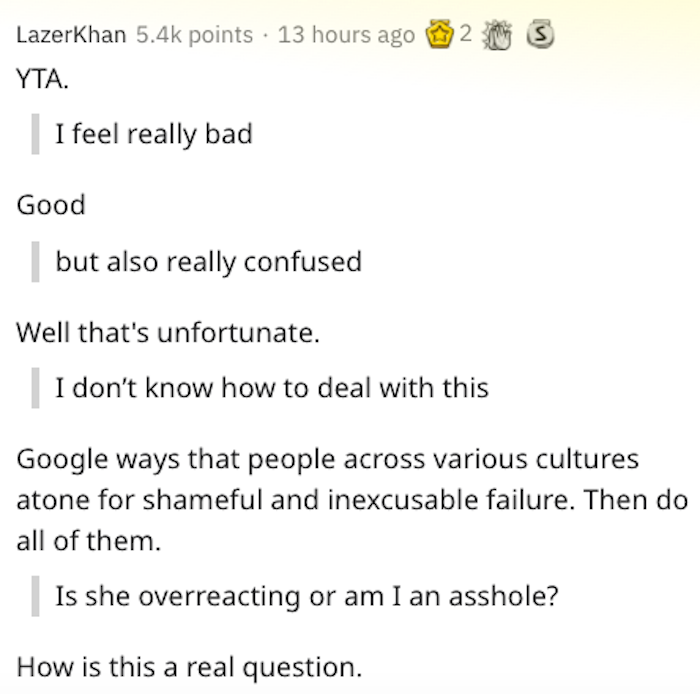 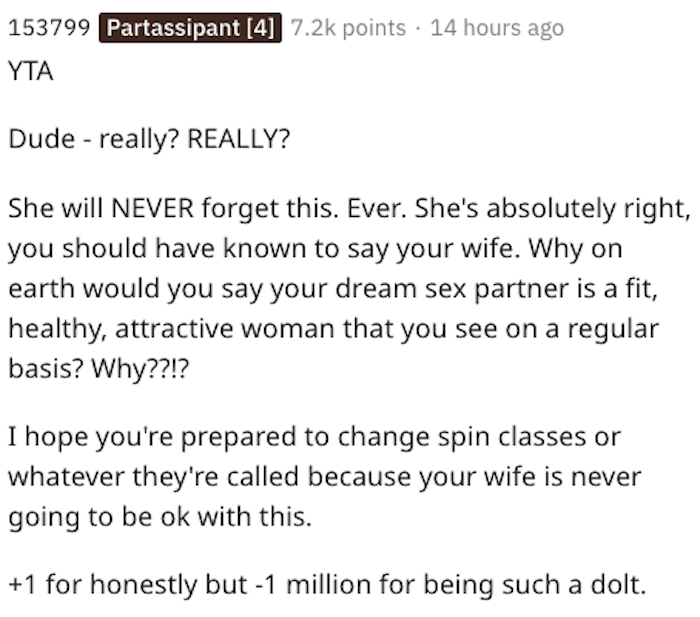 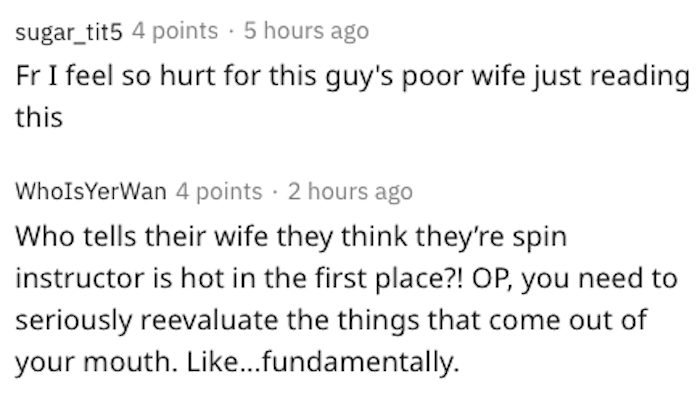 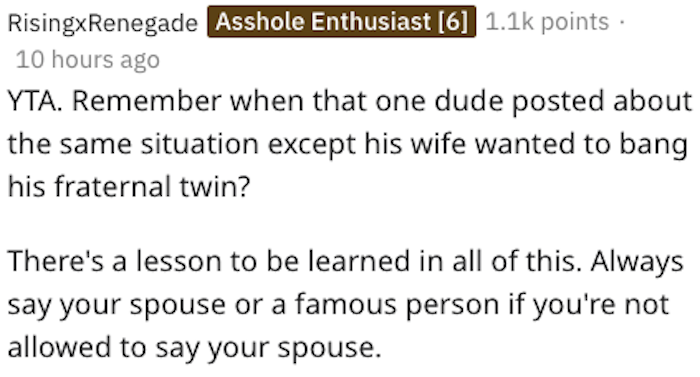 One of the clearest responses was from u/Street-Pepper-1406 , who said that he could actually understand how the OP might say something like this without actually meaning anything more sinister. But the issue was that they weren’t joking in private, they were in front of all their friends. He made his wife feel unattractive in front of people who she wants to respect her and her relationship. That hurts: 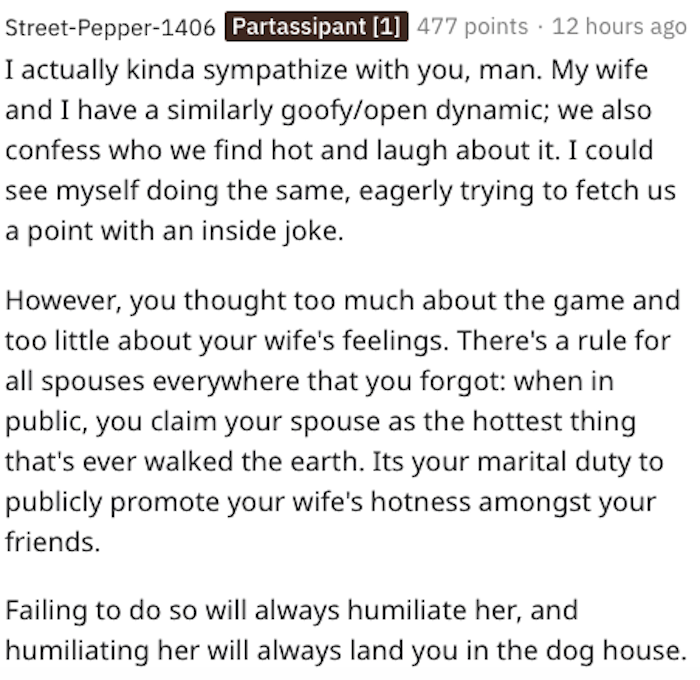 Apologize. And then make her feel sexy as hell.