There are a lot of compatibility issues that can come up in a relationship, and one that doesn’t get talked about a lot is sleeping arrangements. People kind of seem to think that if you don’t sleep in each other’s arms, it’s not love, but actually sleeping in someone’s arms is pretty uncomfortable. You need two people who are cool with it or two people who want their separate sides of the bed or at the very least, two people who respect each other’s boundaries. Unfortunately, the woman who is dating u/Nosleepsocal is dating an a**hole.

He didn’t realize that until it was too late. He shared his story on Reddit, asking for heir verdict, but didn’t seem super happy with the result. He started by saying he “temporarily” moved in with his girlfriend after a fire in his apartment.

“I thought it would be great but it has sucked,” he writes. Then he explains his girlfriend has terrible insomnia, both falling asleep and staying asleep:

She’s been to doctors, and sleep tests, and has tried medication but she says the best solution she’s found is sleeping for 4 hours, waking up for a few hours, then back to sleep for another few hours.

That sucks! I would hate to have that kind of medical condition because being unable to sleep is torturous. But the OP isn’t very compassionate. He seems to mostly think about how his girlfriend’s condition affects him:

I thought I could deal with that but it was more. She hates sleeping next to people, which I didn’t know until I moved in. She’s says she’s scared if waking people up and being woken up by people. I can see that because I have snapped at her a few times when she’s woken me up.

This means she doesn’t want to cuddle at night in bed. Its ok on the couch, but not in bed. The whole point of sleeping with your girlfriend is to cuddle, but she hates it. When I do convince her to do it, she’s on her phone all night. She doesn’t even try to sleep.

He says that his GF has started sleeping on the couch to avoid being smothered and snapped at. He says that her choice to get some sleep has “driven this huge wedge” between them, though it sounds more like its behavior that is causing a problem. He says he’s angry because she “give up even trying” and he feels her resentment. Things came to a head when his girlfriend said she was renting a hotel room to get some sleep for a night, because her back hurt from the couch.

It was heavily implied I would not be welcome and would be staying in her apartment.

I lost it. It is completely a waste of money and a health risk right now. If she just tried sleeping in bed with me instead of the couch she’d be fine. She could take some sleeping meds and be fine, I know she’s taken them before to sleep.

She left to go on a ‘drive’ to clear her head and I’m not sure if she’s coming back tonight. Now I’m starting to feel like I was an asshole for yelling at her, but I have a point. Not sleeping next to me feels like she doesn’t even want me. 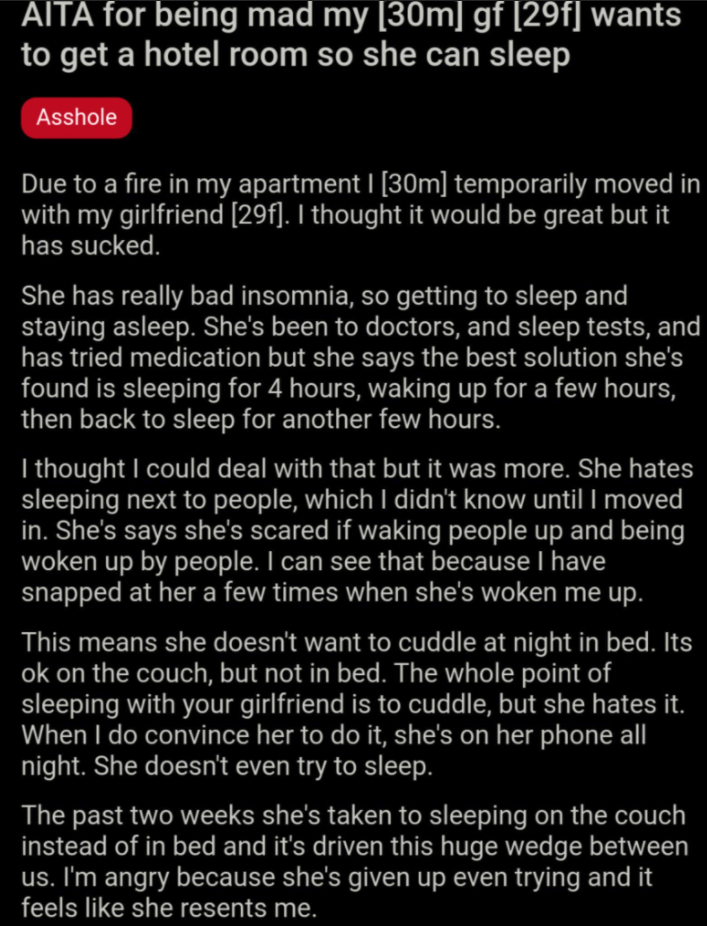 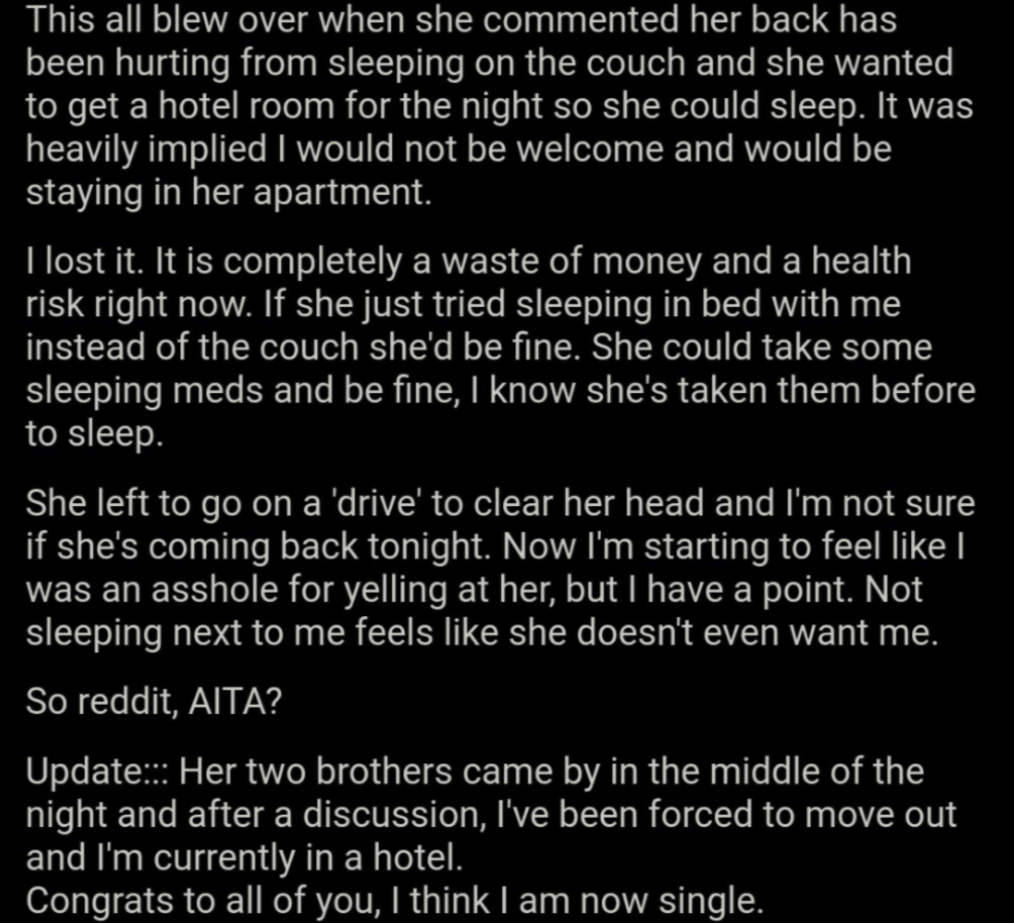 As many people explained in the comments, it should be him sleeping on the couch. His girlfriend has a medical condition, which she manages in her own way. Consider yourself lucky that she cuddles you when she is awake. Taking meds is not a feasible solution for many people, they can make you feel groggy or ill. Plus, it’s her freaking house? Get out! 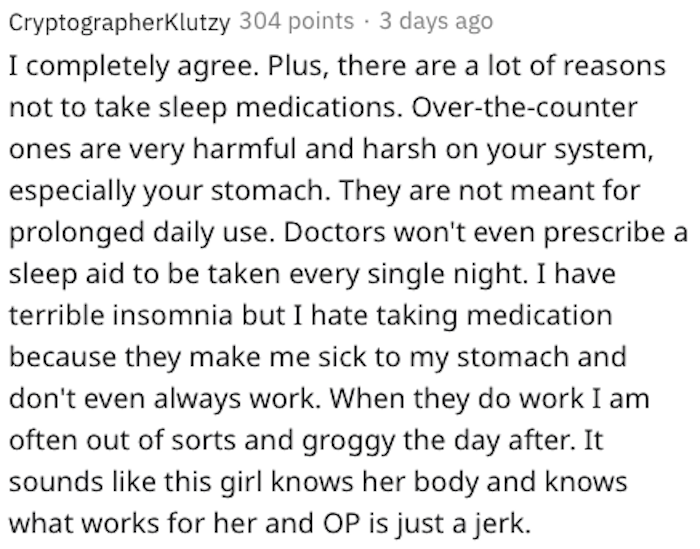 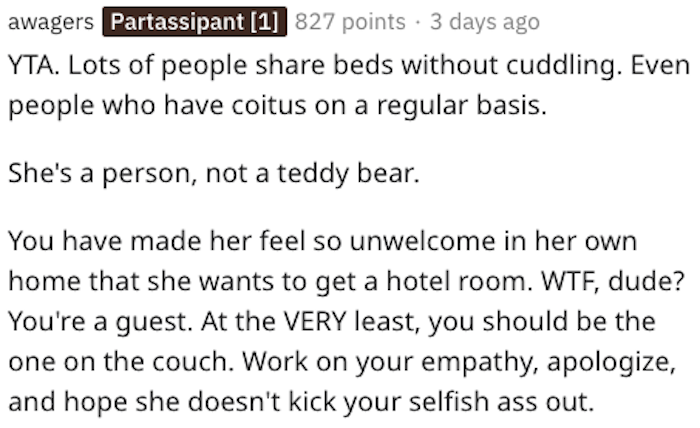 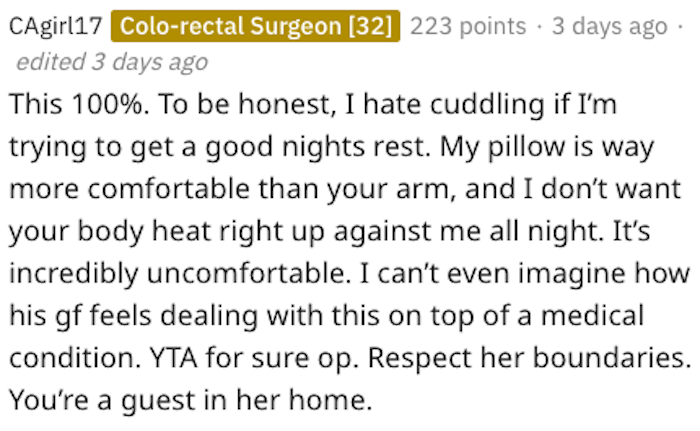 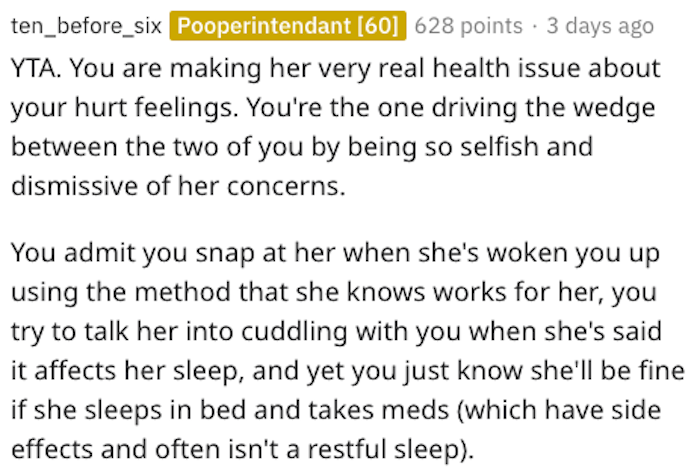 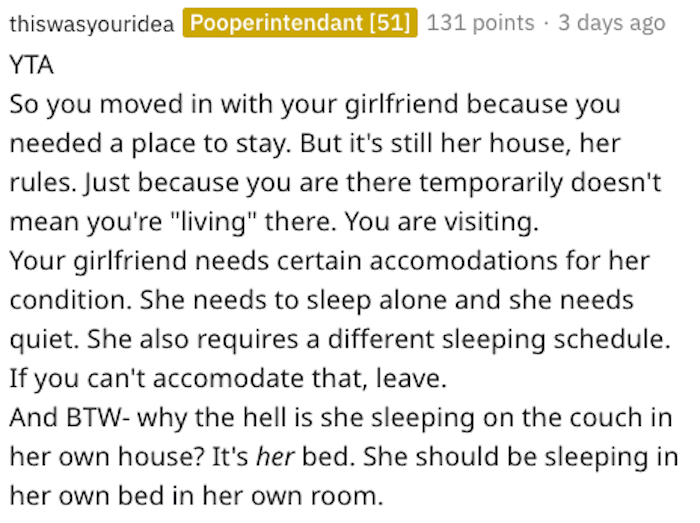 That seems to be the conclusion his girlfriend came to as well. In an update, the OP said he was forced out of the apartment:

Update::: Her two brothers came by in the middle of the night and after a discussion, I’ve been forced to move out and I’m currently in a hotel.
Congrats to all of you, I think I am now single.

You think? You are. And based on your reaction, you’re not just the a**hole about this, you’re the a**hole for life.