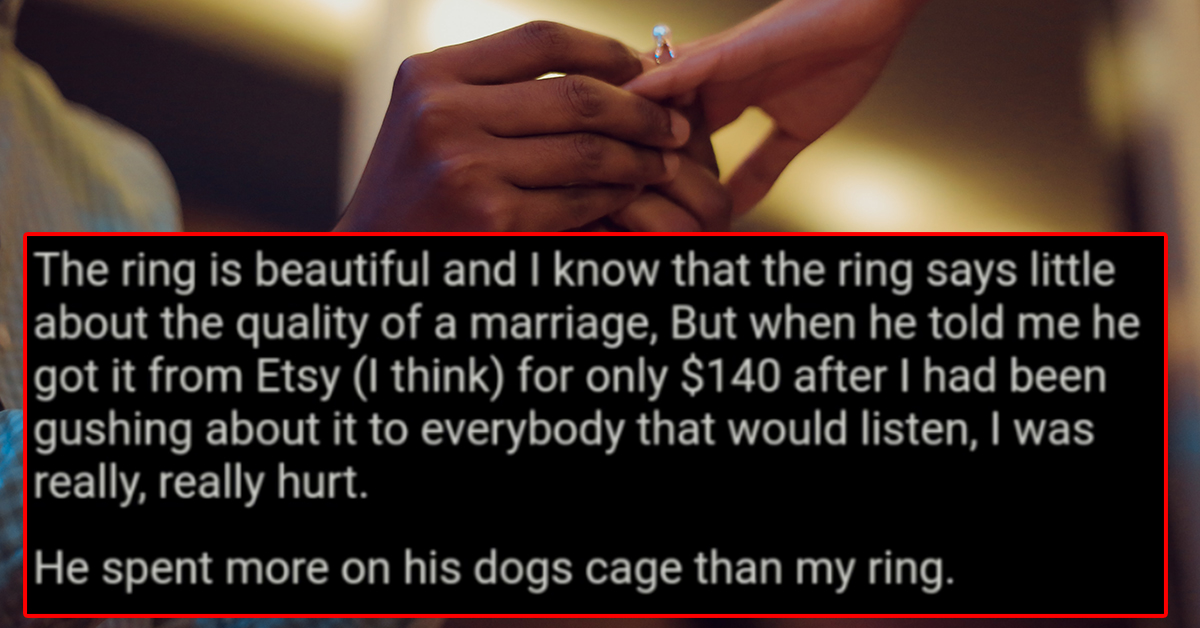 Money is a very sensitive subject, even between two people who want to spend the rest of their lives together. Because sometimes people from very different economic backgrounds fall in love and all sorts of compromises and conversations have to happen. A successful relationship gets through these difficulties. This story from u/saddfiancee on r/AmItheA**hole is an example of an unsuccessful relationship, because there’s been no conversation.

The poster says her fiancé proposed three days ago after a six-year relationship. Her title says, “AITA For being upset that my fiance spent only $140 of my engagement ring?”

On Reddit, there’s always a contingent of dudes who froth at the mouth over the idea that they should spend any money on women, so a lot of the initial comments are insisting that she should be grateful to have anything to put on her finger at all. But the actual story she tells paints a very different, less entitled picture.

To give you some insight as to why I’m upset, it’s because he’s RICH,” she says. “Like owns a Rolls Royce and a mansion rich. Gucci belts and Chanel bags type rich. I didn’t know this when we initially started dating, he revealed it about 9 months into our relationship.”

She adds that the ring is very beautiful and “the ring says little about the quality of a marriage” but she was still hurt to discover he got it from Etsy and there was such a low price tag on the item. She says it really hurt her feelings, especially when she realized how much he spends on other things. 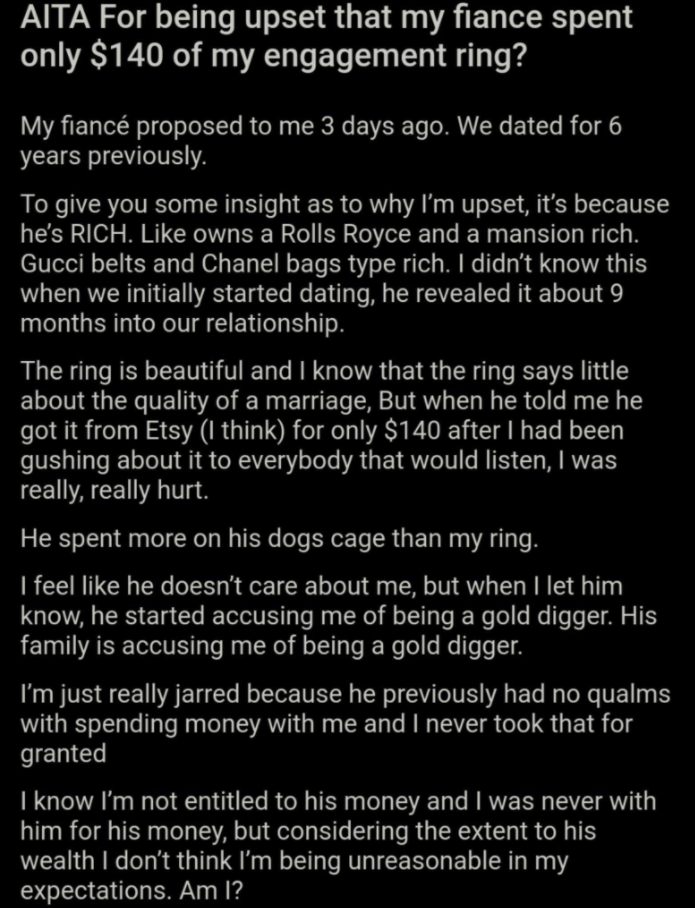 “He spent more on his dogs cage than my ring,” she writes. When she tried to bring up the fact that she feels like he doesn’t care about her, he accused her of being a gold digger. Then his family started contacting her with the same accusation.

I know I’m not entitled to his money and I was never with him for his money, but considering the extent to his wealth I don’t think I’m being unreasonable in my expectations. Am I?

She edited to explain further, saying that he does spend money on all sorts of things:

He gives his mom AND sister $6k every month. He bought his brother a house, and his friend a car. He drives a Rolls Royce. He owns a yacht. That cage he bought for his dog was $850.

I’ve been with him six years, the most he’s spent on me before this ring is $200 (an order from Fashionnova). He encouraged me to spend that much. That was 4 years in to our relationship.

This upsets me because it makes me feel like I’m not a priority. 12k a month goes to his mother and sister. 6 years and he’s never made a purchase bigger than $200 on me. I’ve always been hurting about his reluctance to spend on me, because that shows that he doesn’t trust me or possibly even care, but this ring hurt me more than anything because considering how much he shells out to his mother and sister I would expect a statement of his love and dedication to me to to be a little more grand. I’m not expecting him to break the bank. I would be okay with a 1k ring, he gives more than that to his mother and sister.

I’m not with him for his money. I drive the car that I bought, I pay my own rent, I buy my own food. I’m in college studying for my bachelors in economics. If I only wanted his money I would have left a long time ago. I It’s fact that he CAN spend more than $140 on my engagement ring but is CHOOSING not to that hurts me. Makes me feel like he thinks I’m not worth it.

I never brought this up because I didn’t want to seem like a gold digger and he does have a sort of paranoia about people only liking him for his money. So I never brought it up. I would think that 6 years and no complaints would ease his suspicion, but that’s probably why he thought I’d be okay with the ring. But I wasn’t, so I sat him down and said verbatim “I wasn’t expecting a ring from Etsy. I think it’s beautiful, but that actually kind of hurt me. I would expect something a little better quality.” And he just went off on me. Called his mom and sister and they went off on me.

I still think the ring is beautiful, and if that was all he could afford I would understand. But he could afford much, much more but doesn’t think I’m worth the money. I don’t want to be 2nd place to his mother and sister.

Furthermore, the gem on the ring just fell off. 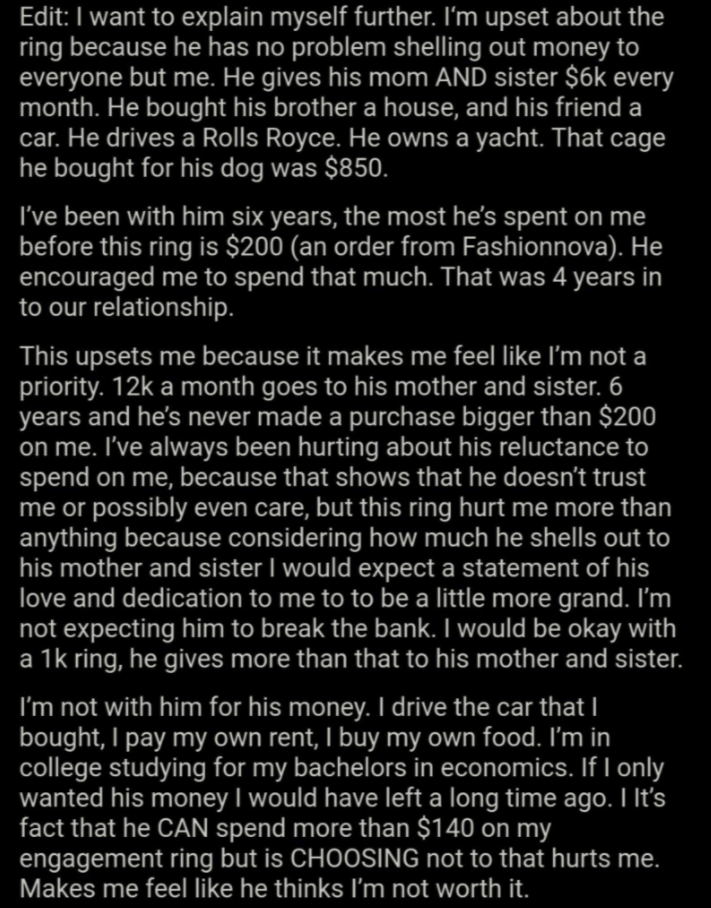 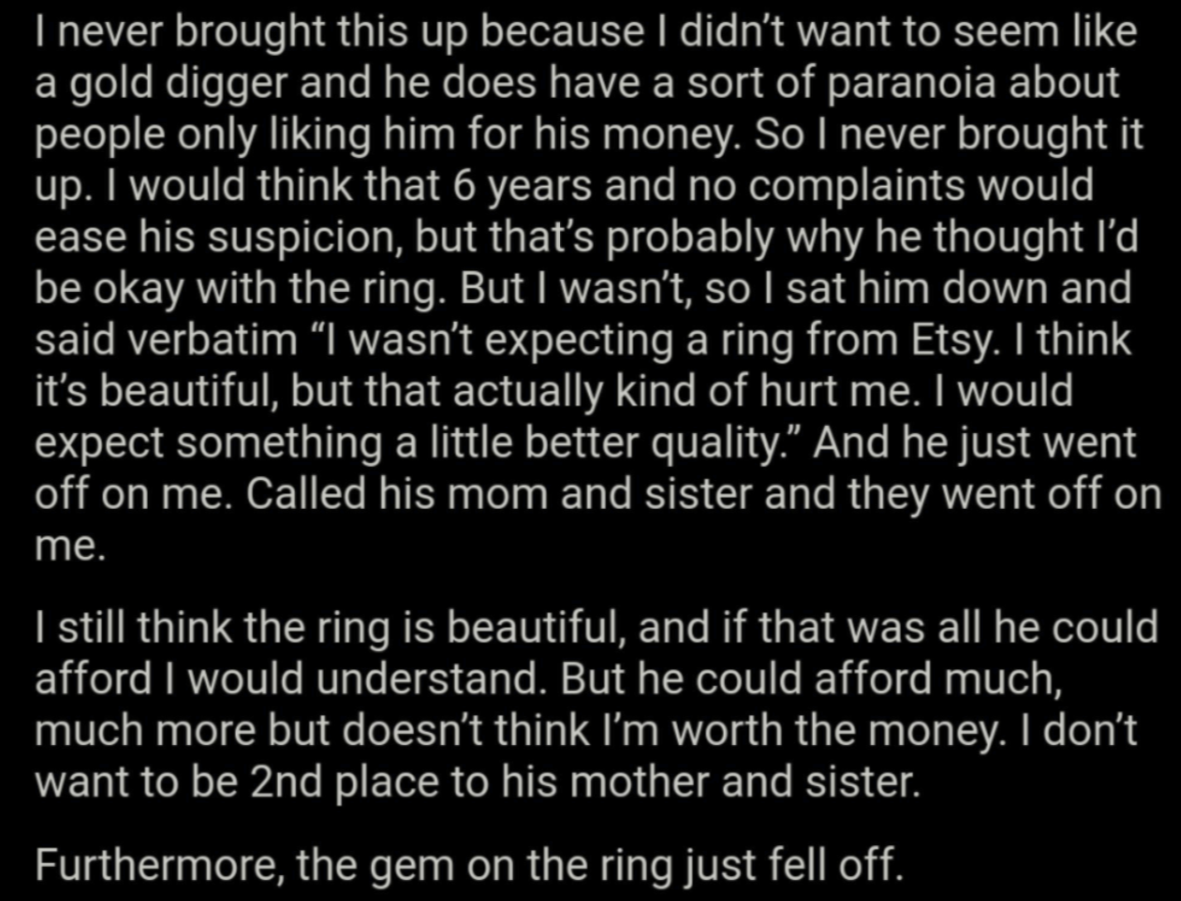 To me, this seems like a fundamental incompatibility. How on earth would these two ever talk about anything? He’s living in his rich man’s bubble, expecting his wife to pay for everything for herself, while he zips off on the yacht?

Also him ringing his mum and sister and then them having a go at you is *weird*.
This guy really doesn’t seem to value you.

Like I’m not saying that it’s good that we place so much value on the price of an engagement ring, but we do and I don’t think the blame for that lies entirely on OP?

And if you DID get married would he insist on separate finances? It sounds like a mountain of hurt is coming.

There are lots of YTA comments getting downvoted and lots more NTA comments getting upvoted after the OP’s edit, especially with the info about the gem falling off. People agreed with the OP that the ring was too cheap, because even if it’s beautiful, it’s not made to last. Some of the cost of rings is inflated, but some of it has a practical purpose, including paying for quality materials. 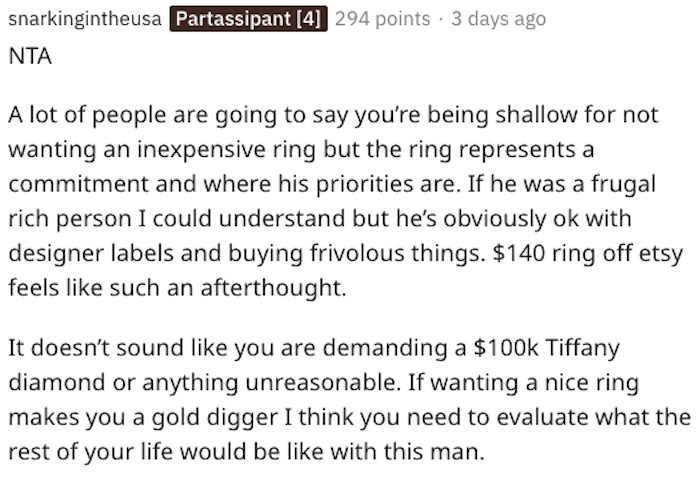 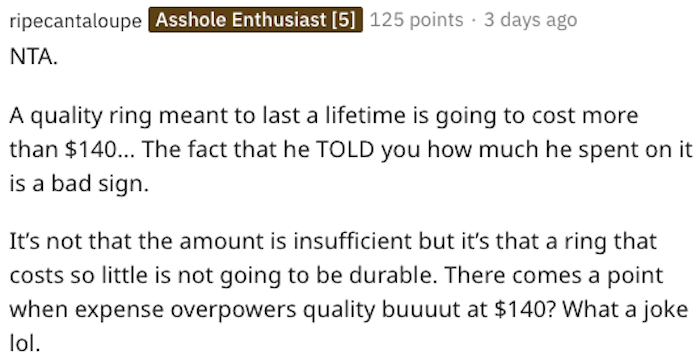 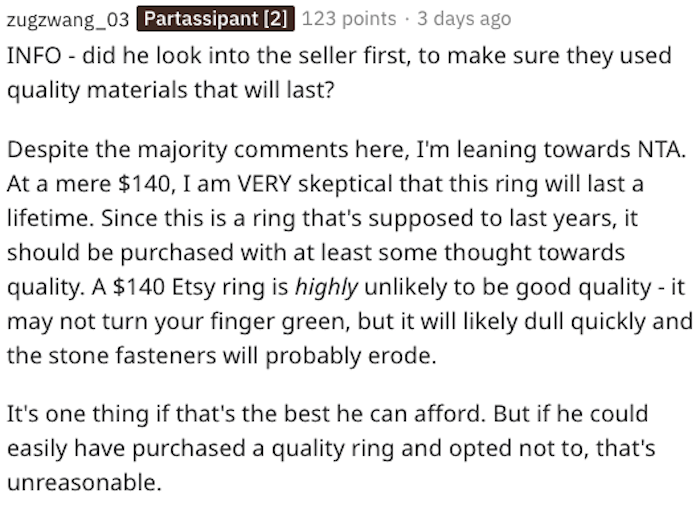 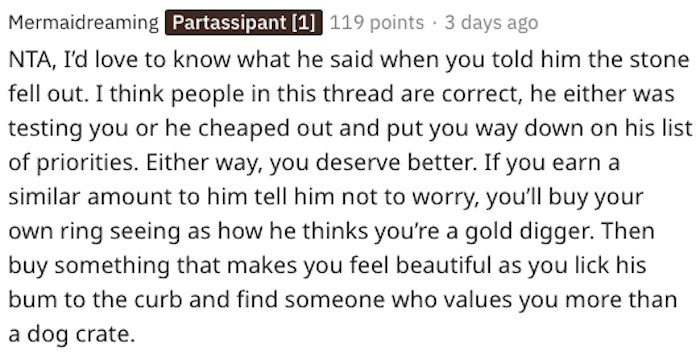 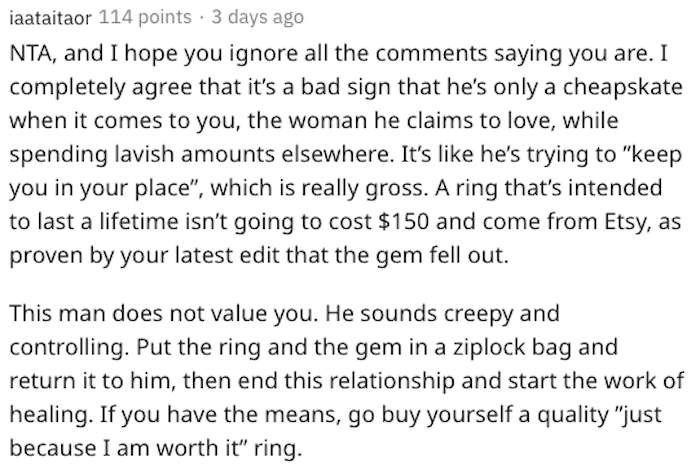 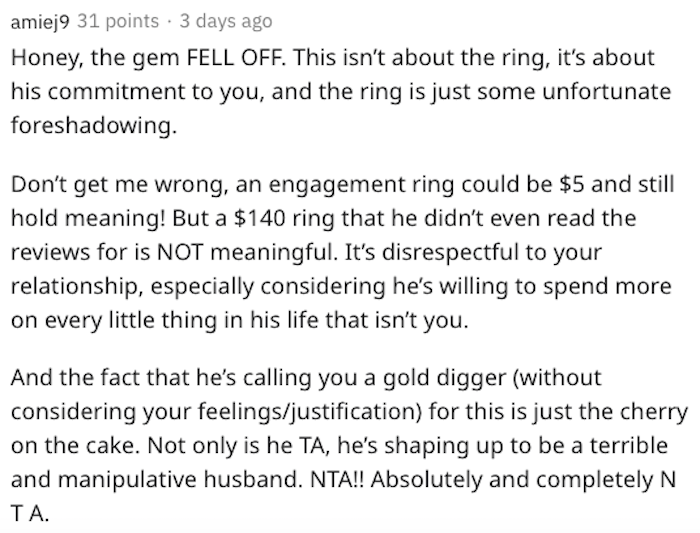 Ultimately, the big issue is that the OP says her fiancé is refusing to talk to her at all. A relationship where no one can talk about money is not a relationship that’s gonna last.