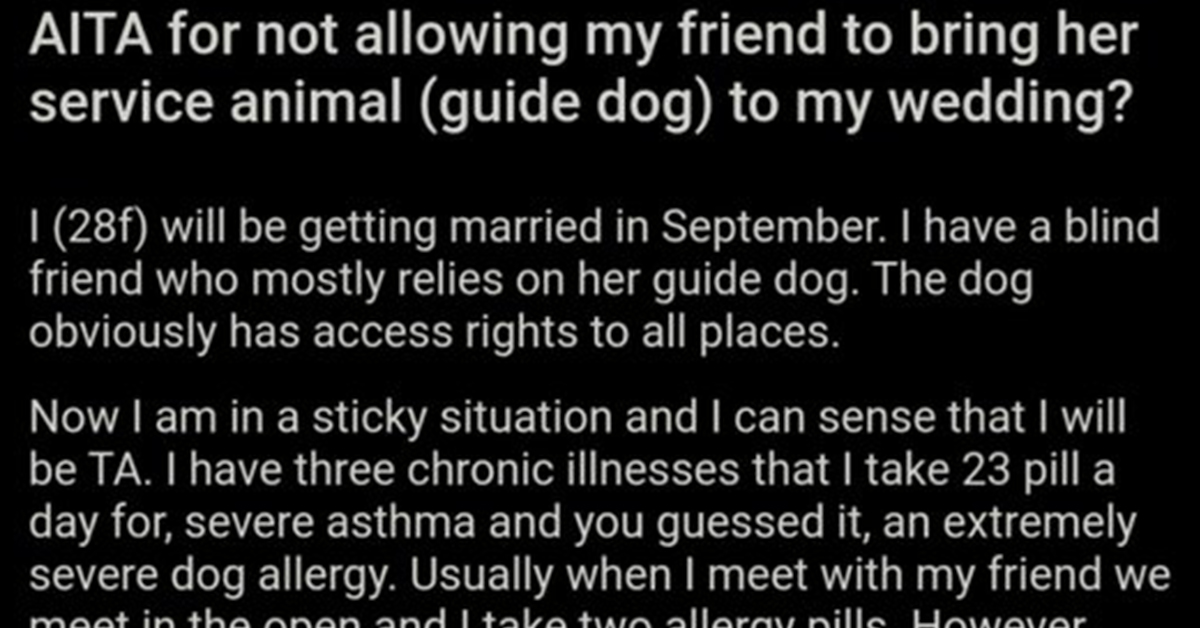 There are posts on r/AmIthe A**hole that you think you can judge by the title immediately, but then take a hard left turn. Though the outrageous ones are fun to scream while reading, I think it’s these more nuanced conversations about what is right or wrong that lead to the most growth, in both the writers and the readers. This story from u/anotherweddingpost is one of those rare examples of a complicated decision-making process.

The OP says she’s getting married in September and has invited a friend of hers who is blind and who uses a guide dog to get around. This has been a bit of an issue for them in the past, because the OP says she has three chronic illnesses that require taking 23 pills a day, as well as severe asthma and a serious dog allergy. To visit her friend she tales allergy pills and they meet outdoors to help with the allergy, but it always makes her incredibly drowsy to the point where she can’t drive. She says she usually crashes after she gets home from their hangs.

But that’s friendship, right? Sometimes you make sacrifices. Except now the OP is asking her friend to make one and getting a lot of pushback:

Our wedding will be very intimate, i.e. we will be in relatively small rooms. I feel horrible about this but I don’t think I can let my friend bring her dog. It just wouldn’t work. I talked about it with my fiance and some friends. Finally, I talked to my friend about it, explained the situation and said I would love her to come but she can’t bring her dog. I said that four of our mutual friends had offered to “be on a roster” and assist her should she need it. Alternatively, if she is not comfortable with this she could bring a person of her choosing to the wedding or I’d pay for a professional aid for the day. I think it is important to note that her dog is not for any additional issues like seizures or anything like that.

Unfortunately, she was less than happy with my suggestions. She accused me of being ableist and thinking her disability can be switched off for the day.

I understand what I asked was a lot and it is a difficult topic. I told her to tell me if she changes her mind and I’d be happy to make arrangements. But I won’t budge.

Now, the title of her post was “AITA for not allowing my friend to bring her service animal (guide dog) to my wedding?” and like most commenters, I expected the answer to be YES.

But her concerns are very reasonable. She doesn’t want to take medication that knocks her out on her own wedding day, nor have an asthma or allergy attack. She has offered her friend a number of alternatives to bringing her guide dog. It’s a big ask, but not really an offensive one. 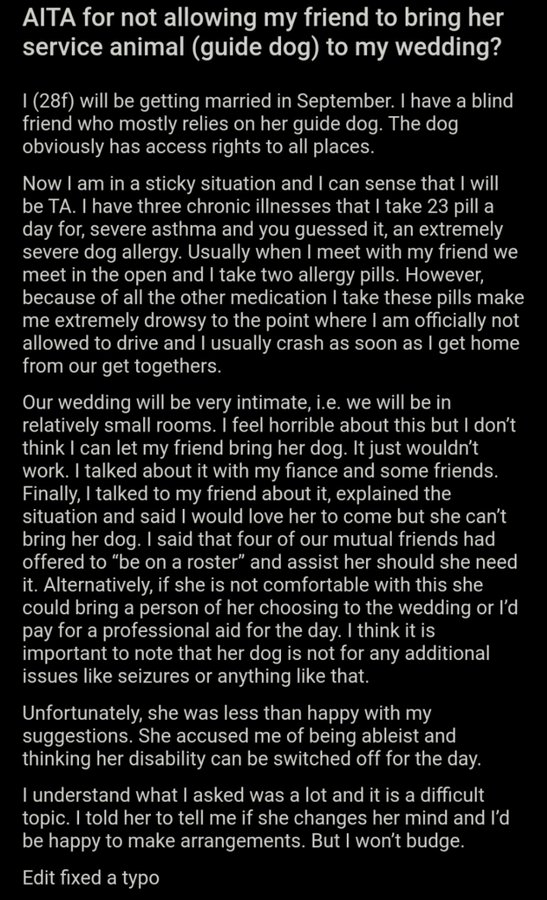 Most people said that the OP was in the right and so was her friend. It’s understandable if she doesn’t want to give up the sense of security or independence her dog affords her, even for a day, but it’s not fair to call the bride ableist when she has her own medical conditions that require management:

At best you’re admitting your lazy and at worse your part of the problem of false news spreading because people just look at headlines and don’t actually read anything.

Sometimes the friend goes without the dog! Like. If the friend wants to go to the wedding, this should be one of the dog-free days! pic.twitter.com/foHrStVCTj

Also this is def a NTA rather than a NAH. No matter how frustrating being disabled is, you don’t call your disabled friend who wants their own wedding to be accessible to them ableist just bc their needs contradict yours. Accepting that it ain’t always possible is disability 101.

Friend decided to invalidate OPs legit disabilities and believes only hers matter. If anything the Friend is being ableist herself. She didn’t even try to understand OP’s predicament and jumped to accusing a well meaning friend who has been drugging herself to see her. 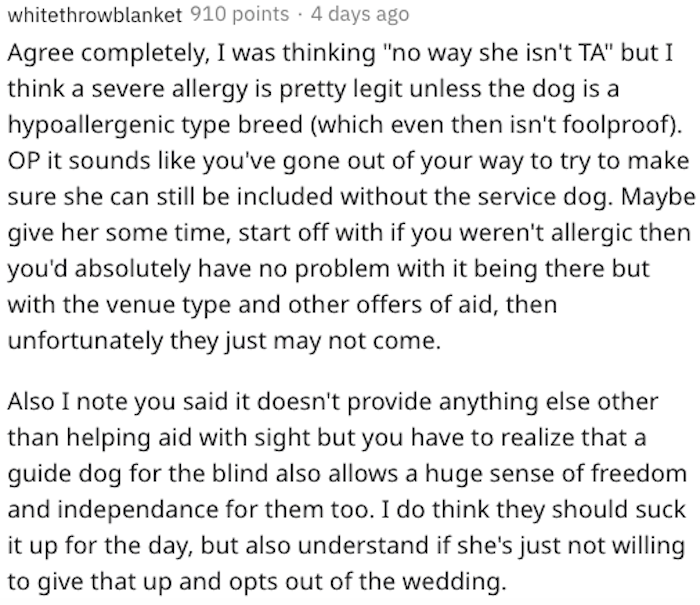 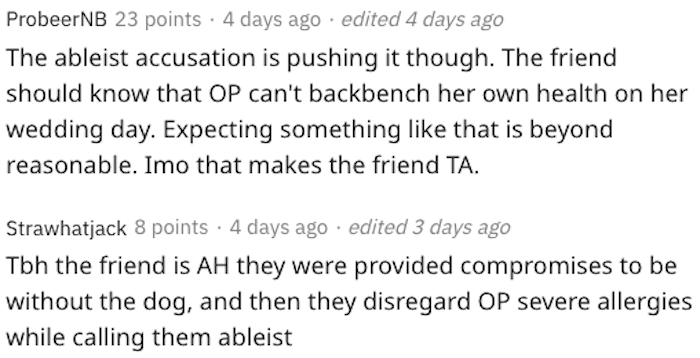 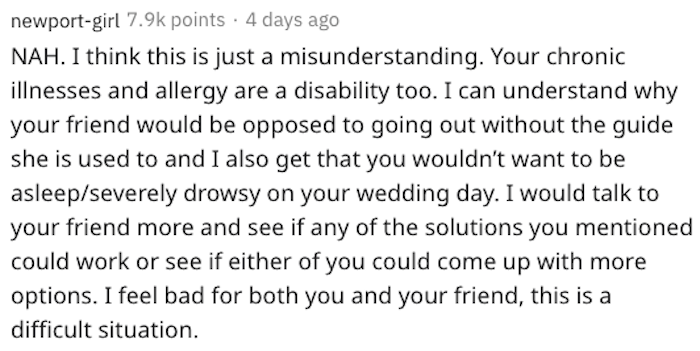 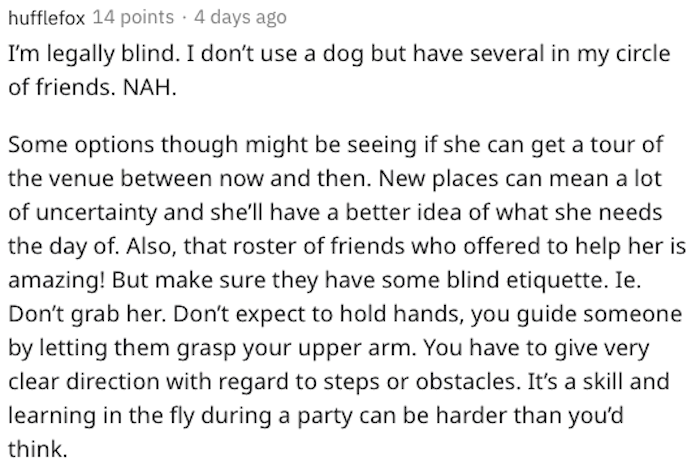 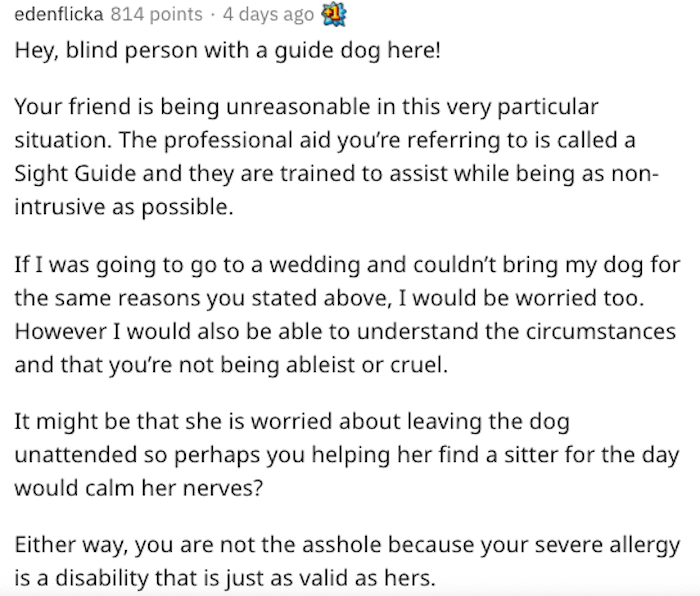 There were a few more practical suggestions, like having her friend take a tour of the venue ahead of time or offering a dog sitter as well, so the guide dog would have care too, in case that was worrying her friend. While we might not get an update, this is a surprisingly thoughtful conversation in the comments of a Reddit post. Who knew?