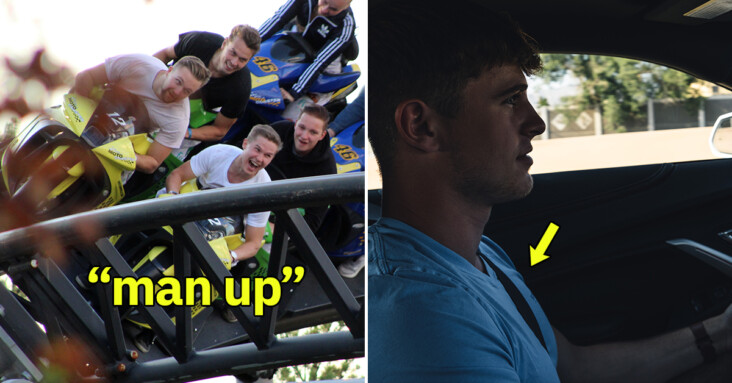 Women know what it’s like to deal with the misogyny, entitlement, and oppression that makes up toxic masculinity because a lot of it is directed at us and we rarely get to enjoy indulging in it.

This thread on r/AskReddit is a good reminder that men are also affected by toxic masculinity, that it makes them miserable and controls a lot of their life.

The thread was started by u/TacoHellDriveThru who asked, “What’s a form of toxic masculinity you’ve experienced in your life as a male?”

The stories below show how much men are policed to fit into the standards of toxic masculinity. Even women help to keep them in line, having ingested all of the same gender propaganda.

Some of these guys have managed to escape, and some of them are forever affected by the times when they were discouraged from feeling or expressing themselves openly.

So, if you’re doing any of the stuff you read about down below: stop.

Getting made fun of for wearing life safety gear on job sites lmfao. F—king idiots that can’t taste, smell or hear properly anymore because they’re too stubborn to put on earplugs and safety glasses, because it’s “not manly” to protect yourself apparently. —YikesWazowski_

I always wear seatbelts in cars. They don’t bother me, I do it automatically without even thinking, but every so often someone will scoff or poke fun that I put my seatbelt on when we share a cab or an uber.

It’s like, why would I not? I don’t feel like smashing out my front teeth if the driver gets into a fender bender.—SnooFox5

I’ve been called ‘gay’ for rescuing a starving kitten and taking it to the RSPCA.—AmunPharaoh

The earliest I remember is when I was on my 1st grade basketball team. We got to select what jersey number we wanted to wear. The coaches would ask everyone why they chose that number and most would list a famous NBA player (23 for MJ, 32 for Magic, etc.).

I chose 14 because it was my aunts number, who was a D1 college player at the time. When I told them this, the coaches laughed at me. Apparently looking up to a nonmale athlete was frowned upon even though none of the coaches made it past high school. —TacoHellDriveThru

I was accused of being a pedophile because I worked at a summer camp as a male… by a female high school teacher. —Cyber_Cola

My favorite color is purple. Tried to wear purple and nope. Too many dumbass comments. —raymondspogo

Mainly how boys are raised to disregard pain and view emotions as a nuisance to be avoided and stifled. It’s helpful for getting things done but not so good for being mentally healthy. —SSDD1

My mother-in-law told me to stop whining and “man up”, we were new parents and I was working nights. The only thing I said was that I was “tired”. It’s stuff like that. I’m actually clinically depressed, but I never talk about it because I’m 6’3″ and masculine so I’m not allowed to feel sad or tired. —DarkPasta

Men in a group tend to sexualise any and all women

I f-cking hate that sh-t

Also growing up I got shit for not knowing about cars, like cause I’m a dude I should have the knowledge of a mechanic —FullMetalDuck89

Was at the weight room at high school and all the jocks saw me and they were making fun of me for trying to lift since I was a big boy back then. When I say they were jocks, I mean muscles, tall, and hard-core abs. When I went to lift they kept on saying they couldn’t believe I was actually attempting to lift.