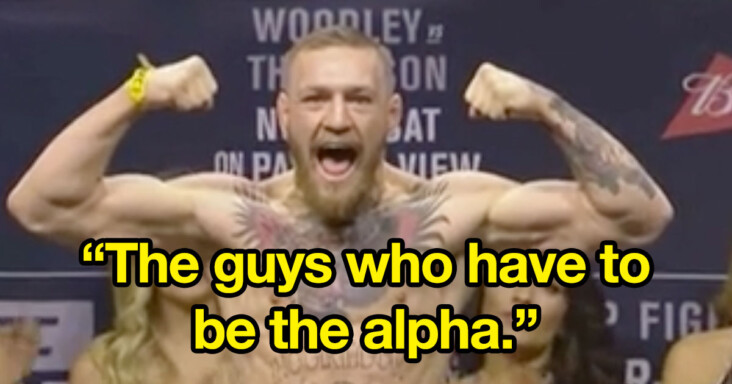 There are some behaviors you exhibit that don’t just upset women—they also piss off your fellow man. Maybe you think being loud and bossy and taking up space will impress your dudes, but it does not.

Or maybe you think your guy friends will respect you for “pursuing” that disinterested girl at the bar. They don’t.

On Reddit, men are sharing the things that piss them off about other men.

So if you find yourself suddenly unable to find anyone who wants to hang out with you, maybe check yourself and make some changes.

1. Joke At Your Expense

“When they make an unfunny joke at your expense to look good in front of women. Proper dick move!” — godca_grema

“The guys who have to be the alpha. They usually start asserting their dominance when they give you a handshake that turns your knuckles white. Then it progresses to invading your personal space while puffing their chest out. Insecure losers.” — Sad-Information-4713

“I don’t have much to complain about my guy friends, however, I just hate some men who, when in a group, keep trying to establish dominance. They usually do that by being loud, interrupting people and laughing at you, instead of laughing with you.” — Tropical_Geek1

“Guys that behave desperate around women and won’t stop hitting on them even if they clearly aren’t interested. I once nearly got into a fight because this one guy was hitting on a good friend of mine and tried to get her attention by stealing her stuff, and when I stopped him he got really angry…” — Shiro_no_Orpheus

6. When They Go After Another Man’s Partner

“How some men have no problem going after another man’s GF or spouse, but they go psycho if it happens to them.” — pcbmale

“Some get annoyed at other guys for having fun when you’re out….having fun.” — Squirrel563

8. When Older Men Are Creepy

“The creepy and inappropriate questions and comments the older men make to the young bartenders where I work.” — Right_Syllabub_8237

9. When They Can’t Clean Up After Themselves

“Men who can’t clean their own mess, do their laundry, cook their own food, being a functional adult basically. I used to live with 3 other people, 2 men and one woman, the guys couldn’t help keeping the house clean even if their lives depended on it. One of them would help if pressured (but I’d had to clean everything again because he had such low cleaning standards) but the other one wouldn’t pick up a broom.” — FingolfinX

“Not standing up to be a father to their children, absent dads. Saying oh I have to baby sit my kids. No! You are parenting your children while the mother is out or away.” — Ohbuck1965

“Dudes who would rather put you down for not knowing every single detail about something rather then genuinely trying to help teach others and spread information. And if they do manage to give a hell to help, they for whatever reason, have to have this demeaning, belittling tone.”

“Guys sending unsolicited dick pics because a girl was being nice to them.” — Bearded_Wonder0713

13. Not Supporting Each Other Emotionally

“Men not supporting other men emotionally, even when it doesn’t seem like they need it. Every man needs emotional support, especially from other men.” — BigFuckHead

“Men that think it’s ‘unmanly’ to drink delicious cocktails. Why is it suddenly unmanly to have a sweet tooth when it comes to drinks? I mean you don’t go to someones wedding and then say ‘ha cake? No way I’m a real man.'” — dontwannausemyRN

“The sleazy husbands, the men who disrespect women publicly and the men who shame other men for being more in touch with their feelings.” — Longjumping_Sleep_12

“How guys handle rejection. Lots of women are outright scared to directly turn down a man’s advances, because some will harass them or get violent. I think it’s one of the big reasons ghosting has become such a common thing in dating.” —gh0stmanX

“Older men hate taking instruction from young guys like myself in the trades. Instead of dropping their ego and feelings at the door, they come in with no experience and wont allow me to teach them…it’s a lot of patience and I find it very frustrating. You may be older but shut the f*ck up and let me teach you something bud.” — HaoleKid808