Sometimes it’s very hard to see the world from other people’s perspectives. This soon-to-be-mom posted on r/AmItheA**hole under the name u/Basic_Spinach about her and her husband’s inability to see eye to eye on a touchy subject: what to name their kid. But after reading it, I’m not sure how they ever got together, because they are not operating on the same plane of reality.

The woman says she and her husband are expecting a baby boy in August and he will be the first grandchild on her side of the family. Naturally, she’s psyched, but an issue has come up. Everyone is fighting over what the baby’s name will be.

In my family, our genealogy is extremely important. The firstborn son since the 1800’s has been given this name. I’m well aware it’s a stigmatized name today, so that’s why I have agreed to using a short form. The name is Gaylord. I get it, trust me, I know most people hate it. That is why I’ve been able to discuss with my parents and grandparents that he will go by Gail in daily life so that he doesn’t have to deal with bullies. They really didn’t like the idea, but I wore them down and they have agreed and don’t seem too offended by this. They see the backlash over the name today as a fad that will eventually disappear, and I agree seeing how accepting each generation tends to become. When society stops being so immature about it, he can start using the full name. 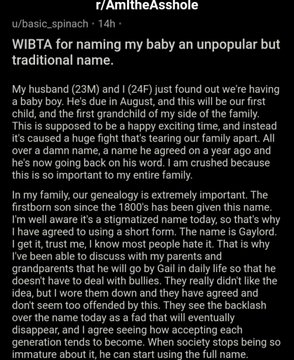 The mom says she asked her husband about it a year ago, saying that she wanted Gaylord on the birth certificate, but they’d call him Gail. He laughed and said “sure.” She thought that was the end of it. Surprise! It wasn’t.

Now he’s claiming he never agreed and thought I was kidding. Why would he think that when he’s met my father and grandpa? He won’t even discuss it with me now, and has since told his parents of my name choice. I now have his whole family hounding me and overreacting, telling me it would be abusive even when we’d just be calling him Gail. My mother told me my MIL has called her to scream at her over the phone. 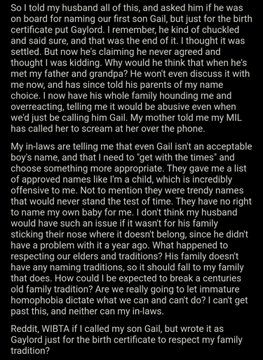 The OP says her in-laws have told her to “get with the times” and gave her a list of approved names, which she is is “like I’m a child, which is incredibly offensive to me.” She also characterized their list as being full of “trendy” names that “would never stand the test of time.

They have no right to name my own baby for me. I don’t think my husband would have such an issue if it wasn’t for his family sticking their nose where it doesn’t belong, since he didn’t have a problem with it a year ago. What happened to respecting our elders and traditions? His family doesn’t have any naming traditions, so it should fall to my family that does. How could I be expected to break a centuries old family tradition? Are we really going to let immature homophobia dictate what we can and can’t do? I can’t get past this, and neither can my in-laws.

She asked for people to weigh in and boy did they. The OP is a major a**hole. It seemed like not a single person in the comments believed that the kids little Gaylord would go to school with would not find out his real name, and Gail was not an alternative since it’s traditionally a girl’s name.

They think mom is setting her kid up for a lifetime of bullying. And, as many people pointed out, it’s not fair to say her in-laws are trying to dictate to her when her own parents have been so intractable about the situation.

There are some people who might understand the “genealogy” aspect if it were literally any other name. 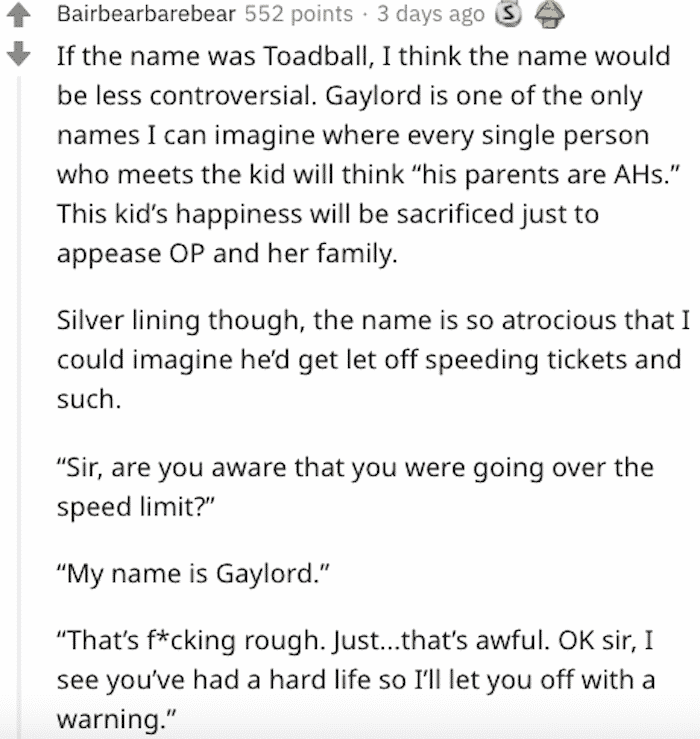 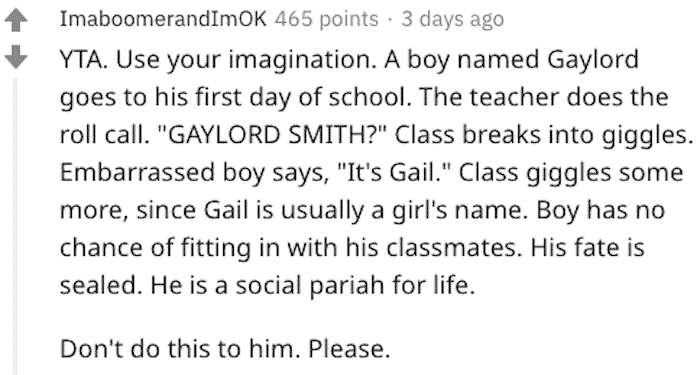 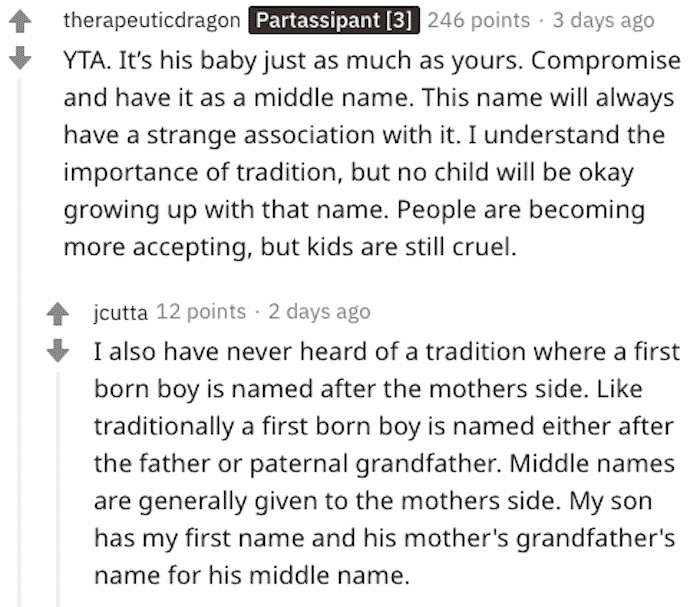 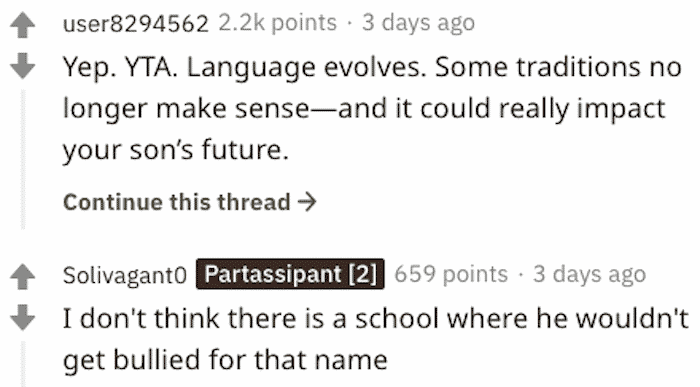 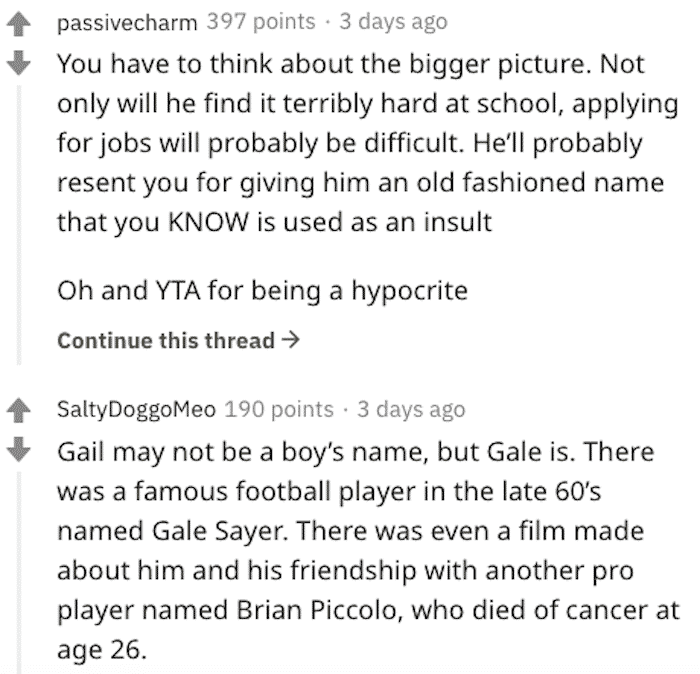 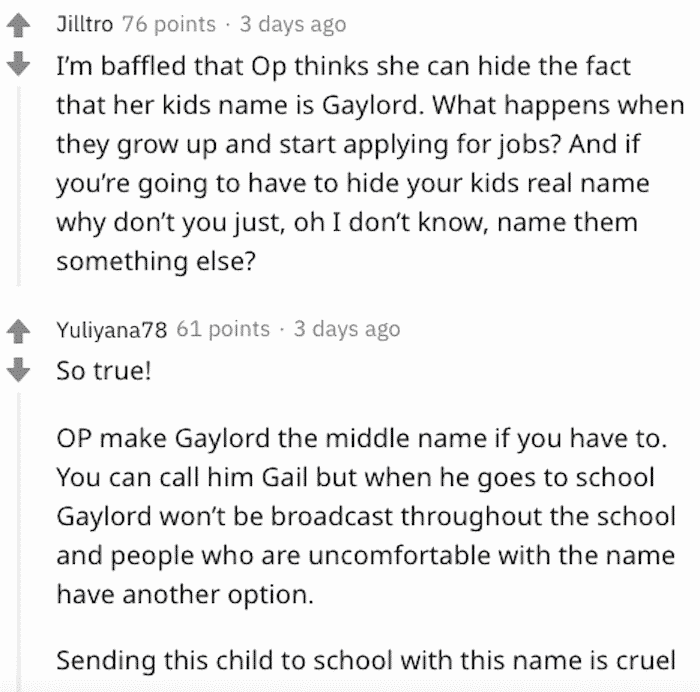 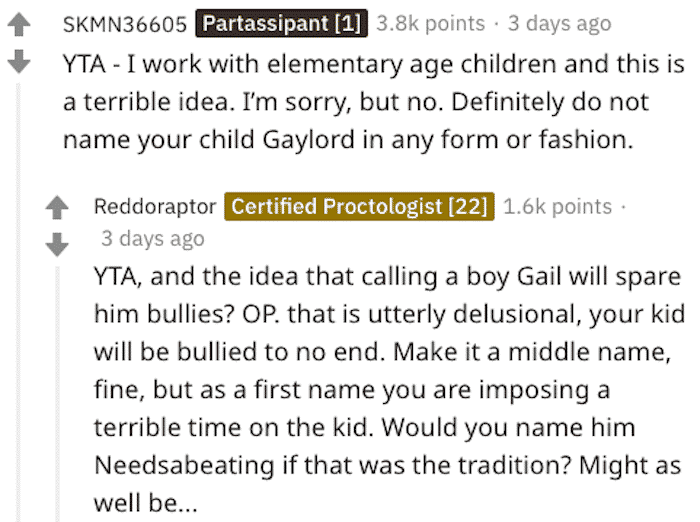 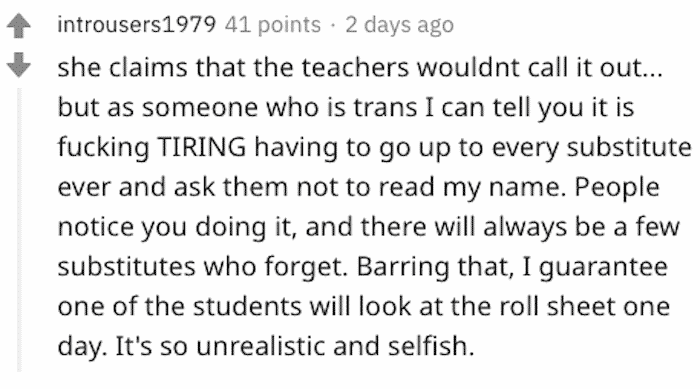 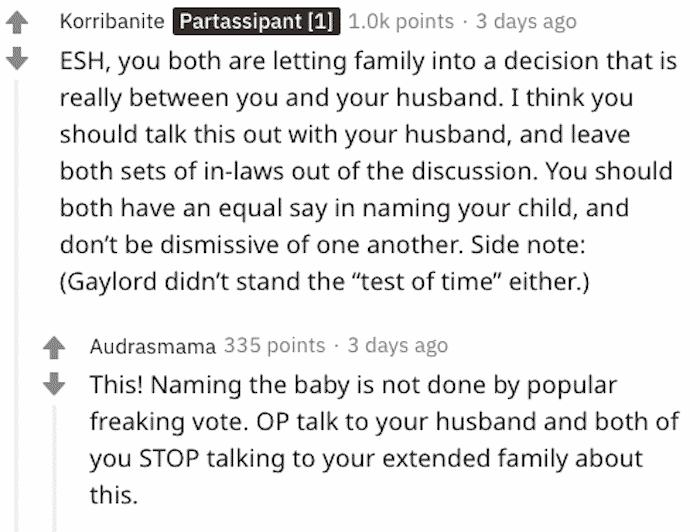 There have been mega updates from the mom, probably because she didn’t expect this level of anger and dismay. While I still don’t understand her commitment to the Gaylord name, she did seem to take in some of what was being said to her, and claimed this was the compromise she’d offer her husband:

We managed to work out that Gale Gaylord would be a reasonable compromise, with Gale being the complete first name, and Gaylord being the middle name. My husband can then add a second middle name after Gaylord if he wants. Grandpa is especially not impressed that it’s being demoted to a middle name, but he did say he understands the pressure I’m facing here. So I’m going to wait til my husband calms down and offer this as a solution. I’m thinking that with the more masculine spelling, my in-laws might come around to Gale. I’ll also offer my husband free pick for our second child’s name, and will accept whatever he chooses. 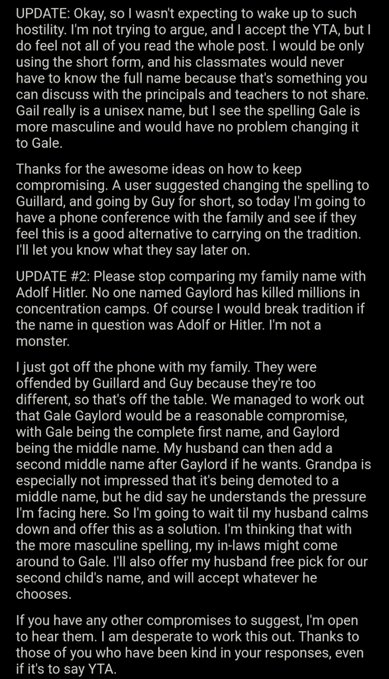 BUT then her husband found the Reddit post since it’s everywhere. She says they’re all embarrassed, but she may yet update with what the final verdict is. At this point, she might as well name the kid Gaylord, because everyone is going to know who Gale is when he comes to class.