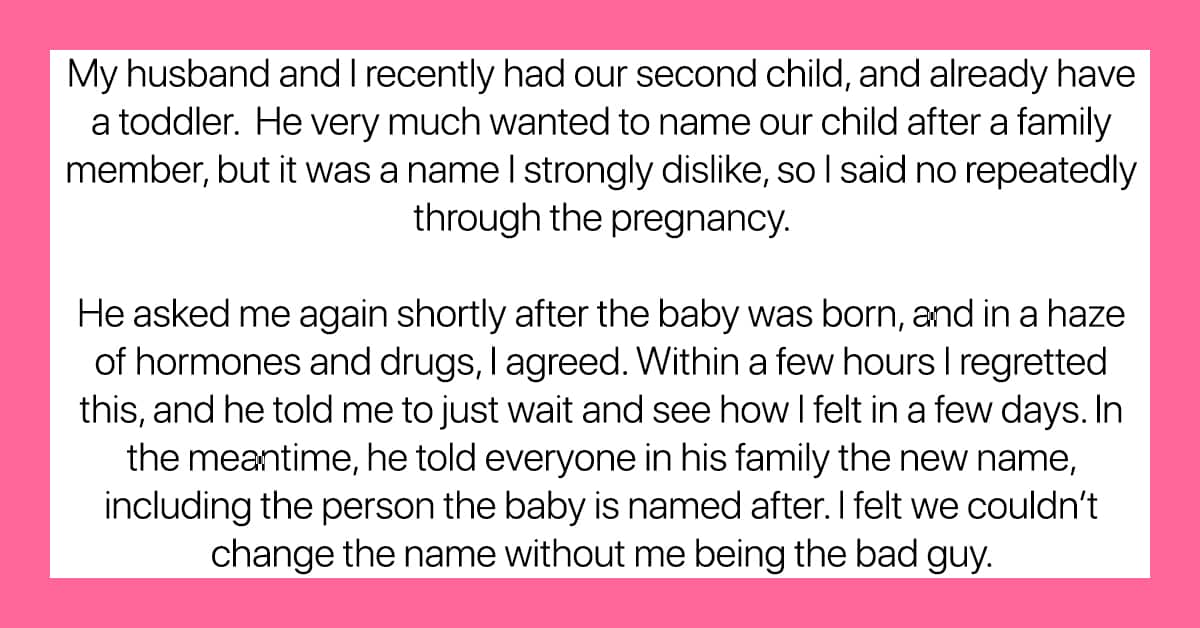 Twitter account @redditships usually documents the craziest Reddit posts about relationships for people who don’t want to make Reddit accounts to squeal over. They also sometimes share wild relationship stories from other sources, like this one posted on Slate. It’s an advice column about parenting answered by Nicole Cliffe. This story is a doozy.

The woman writing in to Cliffe says that she and her husband just had their second child. Right up until delivery time, he was pushing a name she didn’t like and so they hadn’t settled on one—but then he asked her while she was “in a haze of hormones and drugs” and she accidentally agreed.

He very much wanted to name our child after a family member, but it was a name I strongly dislike, so I said no repeatedly through the pregnancy. He asked me again shortly after the baby was born, and in a haze of hormones and drugs, I agreed. Within a few hours I regretted this, and he told me to just wait and see how I felt in a few days. In the meantime, he told everyone in his family the new name, including the person the baby is named after. I felt we couldn’t change the name without me being the bad guy.

She immediately regretted it. Six weeks later she says she still hates the name and tries to never say it:

I don’t see any way to really change the name now, and there’s nothing objectively wrong with the name itself. I don’t know if this is some weird postpartum hormones, a pandemic, parenting two little kids … but I can’t stop thinking about it. I’m resentful and angry at my otherwise great spouse. Would love your thoughts on how to move past this.

The comments on Twitter are basically, “Throw the whole man away!”

I bet if you took a look at everything, no they really aren’t.

I’m uh…I’m sadly not surprised at all.

Yes.
Some 30 years ago my childhood bff was zonked out w episiotomy, painkillers etc with first ever birth, and husband did this to her. She’d planned on naming her son Forest. Woke up to a son named BILL

…oh. So basically he low-key manipulated her when she was in a vulnerable state. 😬

And won’t do it again when she’s ill, incapacitated, etc?!? pic.twitter.com/6HHvQ8nNbw

I’ve thought about doing this because same happened to me

This is a good one

That really worries me. He just showed you that he is willing to take advantage of you to get what he wants. What on earth is he going to do in the future if you are incapacitated or ill?

My thoughts exactly. Wtf. The answer asks like he ordered a pizza topping she didn’t like while she was napping, not LEGALLY NAME THEIR CHILD WHILE SHE WAS DRUGGED.

Fun fact: you can legally change your baby’s name 1x within the first 6 months if it’s not working for you! Or, you know, if one parent names the kid something Not Good behind the other parents back 🙃 granted you may need both parents to agree to change it but still worth a try

My dad totally did this when it came to my name. I was born on a Sunday and he went to church and told everyone my name was Brittany (which was in the running, but my mom preferred Courtney) without even talking to her about it. He’s an abusive ass and my parents aren’t together

Grrr can relate, named my son Loki Eli which I loved. Then my ex harassed me to change it to Eli Loki as he didn’t want people thinking we’d named him after a Marvel character. Still angry about that despite loving his name, I feel he took advantage of me emotionally post-partum.

My dad did the same to my sister when she was born. Named her after my mother, something she was vocally against.
During the first year my mom called her “Baby” because she hated calling her own name to her daughter

My grandmother was passed out from labour when my dad was born and my grandad just signed papers for a name she didn’t want. She just ignored what the certificate said and called him a completely different name, and now that’s what everyone knows him as 🤷🏻‍♀️

divorce him & change the name

Nicole Cliffe’s advice is somewhat more moderate, maybe because she recognizes dumping someone during a pandemic with two babies to raise isn’t the easiest thing to do. Cliffe says the woman’s husband did take advantage of her, and she has every right to be angry:

Regardless of what you do regarding the name, you need to talk about how this went down, how you feel steamrolled by his behavior, and that you would like an acknowledgment and ideally an apology. I guarantee he knows he pulled a fast one, and you do not want to begin your journey as parents together without establishing that you’re a team, and he let the team down at a very fragile moment. I would bring it up on a good day when you feel emotionally stable and able to have a difficult conversation.

She adds that changing the name is not impossible, and also that the new mom might come to be comfortable with it in time, or find a new nickname that works. It’s hard to imagine that, but words are probably the first step…to calling the man disposal service.