In a wildly over-the-top Reddit post over at the “Trashy” subreddit, Redditers are treated to a display of rage and melodrama when a wife — who was VERY much cheated on — writes a vicious message to her soon-to-be-ex on a mattress. Best part? She writes it in thick blood-red spray paint (or is it blood?) and leaves it outside for the entire world to see.

She writes, “I changed the locks Gary. Take the bed to Laura’s house. Sl—t I’m divorcing you. I told the kids what you did in our bed and they don’t love daddy any more.” 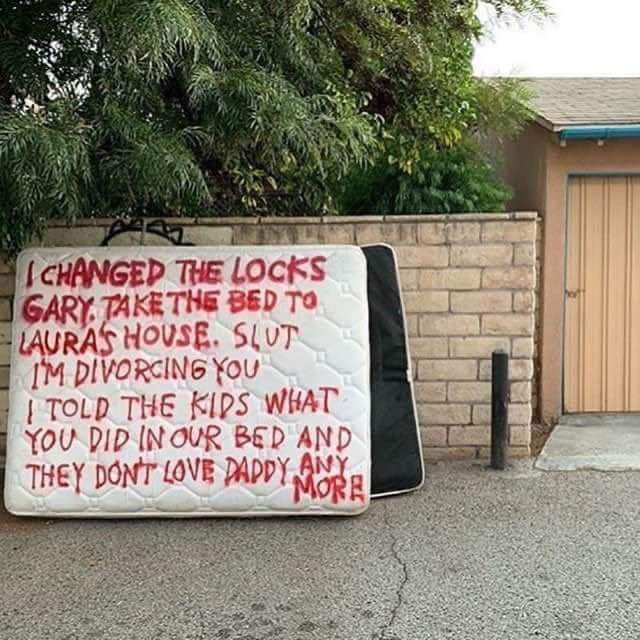 Obviously, this sort of thing is super sad. When we get into relationships and have kids with people we don’t expect to be betrayed in such an intimate way. Alas, it happens—and sometimes when people broadcast it to the world, other people are gonna share it to the “Trashy” subReddit. It’s just life.

Here’s what Reddit had to say. There were a lot of people focused on the actual handwriting on the mattress, interestingly enough.

“Yeah, I’m impressed with the ability and dedication. And they only didn’t leave space for one word.” — cisforcookie2112

“It’s because of the seams in the mattress. Like ruled paper.” — RobinMoonshadow

“It actually looks like she wrote the first sentence, took 5 to chill her beans, then came back with the 2nd wave in an even more frantic mood, just going off the width of the lettering alone.” — kassinopious

There were many who thought that Gary cheating was trashier than his wife’s mattress message.

Of course, there were dark sex jokes galore.

“Took more time to read that than time it takes me to finish. Anyone got tips for making me last longer? Working on kegels.” — TRIPITIS

“Did she orgasm, though? The kids need to know what kind of lover their father is.” — wezlywez

The thread got people onto the topic of cheating and trauma, too. For real, this “Trashy” sub got dark.

“You know what, as a middle schooler I found out my dad had an affair and my mom (such a strong f—kin woman) never let a word slip to anyone about it while she tried to save their marriage. They didn’t even know I knew until a year or so ago when their marriage kicked the bucket. I would’ve rather my mother did this and saved everyone a whole ton of pain, and kept my dad from having the ‘I apologized, what more do you want from me’ complex.” – Makualax

“I ended up telling my kids that my ex wife cheated after keeping it quiet for a while because they kept overhearing our arguments and I didn’t want them to assume that I was THAT mad about the other things we used to argue about. Turned out they both already suspected she was cheating on me but didn’t want to say anything because they weren’t sure.” — MarkHirsbrunner

“My dad worked in another state 5 hours away. One Friday night after work my mom went out with her girl work friends to unwind. My sister snitched on my mom and my dad drove through the night to come home and trash everything and drag their bed outside- on no basis other than her not being home. I wish my mom had the courage to divorce him but she never did.” — blobtron

When you talk to your kids about your drama (and broadcast it onto a very public setting), they will remember it. And it will be traumatizing.

“Yeah. Like, it is sh—tty for her to bring unnecessary trauma to the kids, but I feel like the title is totally ignoring the fact that Gary is a complete and total piece of shit, who betrayed his family. Including those kids. Even if it’s not direct, he traumatized them too, but in a more impactful way, and for the rest of their lives too. Because even if they don’t split (although it seems like she’s not having that ”we can fix this” sh—t), they’re still going to have to live with their parents having nothing but spite and contempt for one another until they eventually split ten years down the line. ”Dad chose getting some strange over us, knowing the consequences would effectively destroy our everyday lives as we know it. Love you too, Dad.” — LN_McJellin

But mostly, how do cheaters what they do? HOW?