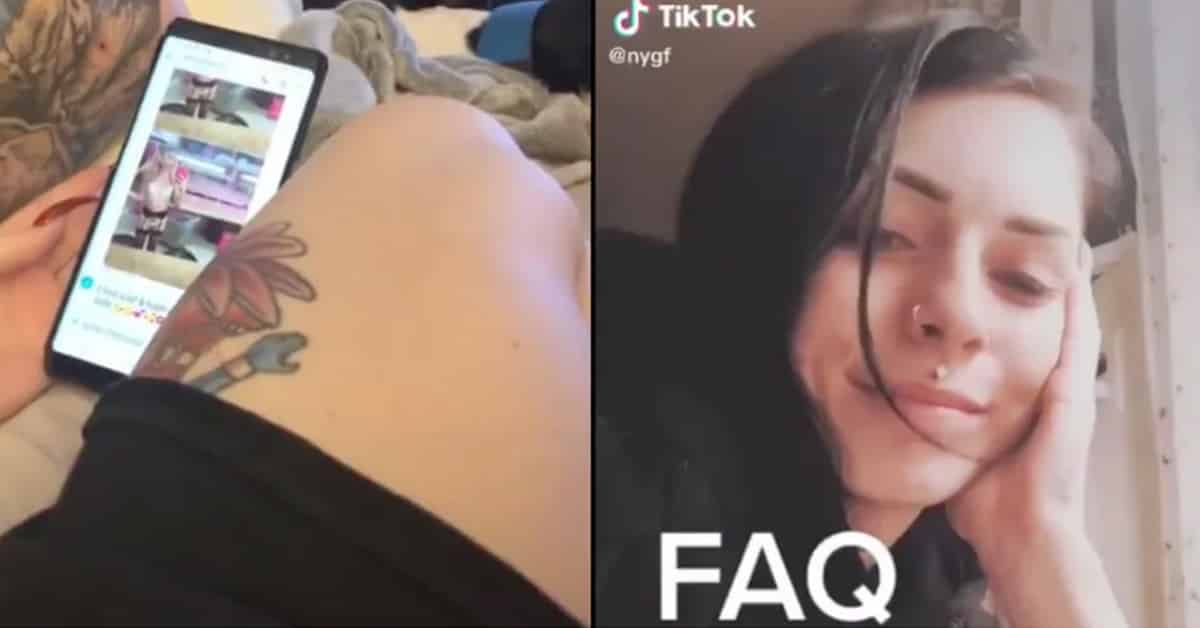 TikTok has become popular for people sharing personal content, dancing girls, and highly entertaining and dramatic nonsense — and we can file this story into that last category. In a recent TikTok upload, a woman exposes her boyfriend for cheating by actually filming and sharing his texts to other women. Yikes.

The video of Autumn Moore unlocking her boyfriend’s phone and reading his texts to “Jason Work” went viral.

Damn he do be sleeping good doe (she caught her man cheating) pic.twitter.com/pB5X1NzbLn

In the video, which was viewed 3 million times and shared on other social platforms, you see the woman open her boyfriend’s phone as he sleeps—and he’s dead asleep for someone with such an epic secret—and go through the phone. The messages (all filled with heart emojis and “I love you” and “baby”) go way, way back and are extremely emotional, as if he weren’t just talking to someone else but actually dating them as well.

By the end of the video, she throws the phone at her sleeping boyfriend and the video stops. We wonder what he had to say about his “work” friend, “Jason.”

Good thing, Moore filmed her own “storytime,” which explains the whole messy ordeal in detail. She says only recently his phone had a lock to open. She claimed he was sexually abusive, manipulative, and that he’d take ‘long’ work trips. He also paid her bills so that she wouldn’t go to work. So that he would know where she was.

@nygfThere’s gonna be so many parts to this story. Sorry.

Afterward, she left the psycho and even texted the woman, who ended up being her former coworker. (Hint: The coworker didn’t care).

I’m nozy so I went to TikTok to get the rest of the tea and…. pic.twitter.com/UYwKSTdnxm

Twitter had a LOT to say about all of this. For one, some people were firmly against her going through his phon —a valid point…

It’s so weird to go through another person’s phone.

Where’s the trust. She shoulda trusted her man. Prolly why he moving on. She’s insecure

…While others were like, “Go through the damn phone!”

But if she didn’t she wouldn’t know all the shit he was doing behind her back and that shit would continue.

But seriously, WTF? Thankfully she found out and could get out of there.

My heart is pounding and this ain’t even my man! 😡

Dump him sis, HE SNORES!

How did she remain calm for so long, they asked. A GOOD question.

Who wants to date a guy with an Android anyway?

The fact that he cheated on her on a Android device, 🚮 pic.twitter.com/yqy5Zf8CtJ

So rule number one , don’t get with anyone that has a android

We don’t condone violence, but people definitely thought the nails were the star of the show:

Them nails scary as a mf…😂

I’m screaming at my phone right now “YOU HAVE THE NAILS TO CAUSE SOME DAMAGE! USE THEM WISELY!”

she tried to gouge his eyes out, im pretty sure she used them extensively on that piece of shit

At least 98 people agree that “everybody cheats.” Yikes.

Everybody cheats. If you want to be a Constance detective in ur relationship. You will find what you a looking 4. #Ayakwini

Here’s one way of looking at it, we guess?

We’re feeling like this sums everything up pretty well:

And he in Vegas sis when and where pic.twitter.com/sPMGRfvV4e

You can watch all 18 TikToks here.