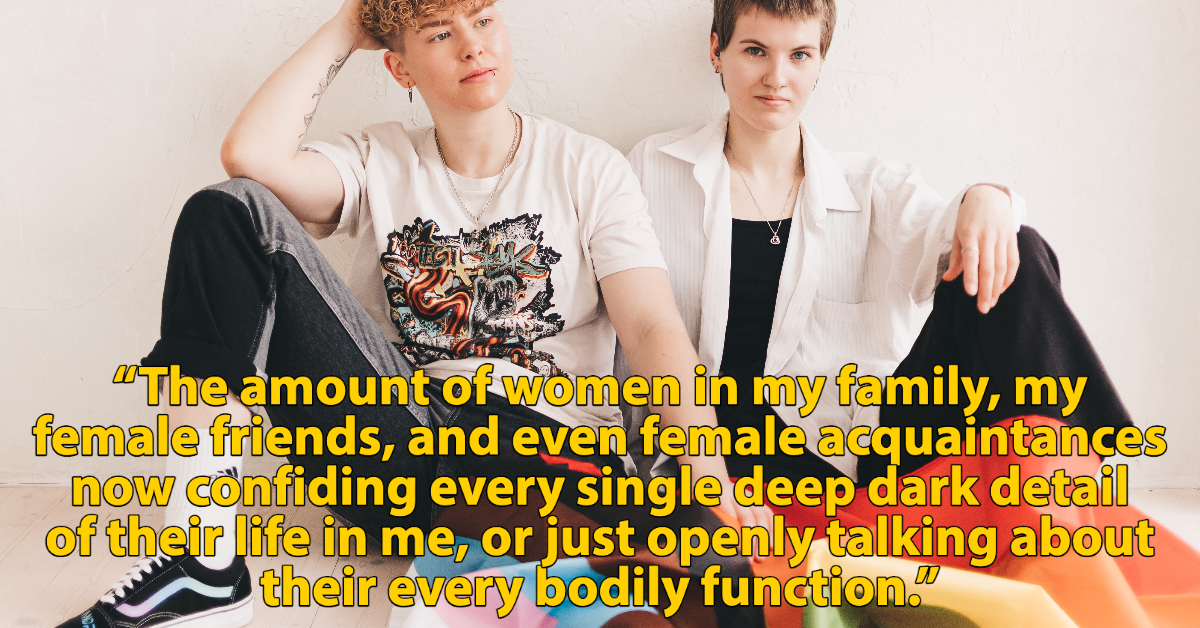 Transitioning can be both liberating and difficult as people learn to navigate life. That includes dealing with family members and friends — but also society at large. It’s no surprise that men and women are treated differently, but trans people have a unique experience in finding this out firsthand.

On Reddit, trans people are sharing the biggest culture shocks they had once they transitioned — from lamenting the loss of pockets in clothing to feeling that folks are more concerned for their safety walking home alone at night.

“I heard from a trans man that after he grew a beard he kept getting nods from other bearded men.” —

“People weren’t joking when they said Canadians use the word ‘bud’ a lot when talking to boys.” —

“Almost no touching by non family members. When I was living as a woman they would give hugs, touch my shoulder or arms, even stranger wasn’t always appreciated. As a man now they will shake your hand nothing else.”

“Male here. Suddenly no one gives a sh*t about me, I feel totally anonymous. No one makes any comments about me or double takes or smiles or anything. I’ll get a nod but that’s it.” —

“The amount of women in my family, my female friends, and even female acquaintances now confiding every single deep dark detail of their life in me, or just openly talking about their every bodily function. I became ‘one of the girls’ way before I was comfortable with it.” —

8. Girls Are So Nice

“Girls are so nice to each other, it’s seems so strange that a random woman in the metro might just compliment me on my clothes, just like that. Also, women’s bathroom are dirty!” —

9. People Are More Concerned About Safety

“As a passing almost fully transitioned trans woman, it’s that people are a *lot* more concerned about my safety as a woman than they ever were as a man. I’ve always been a rather adventurous outdoorsy kind of person, but when you do dangerous stuff as a guy people just shrug it off, but when you do it as a girl people suddenly get really worried about you. Like…pre transition I could run a 5k in the rain and nobody cared. I do that as a woman and suddenly people are all stopping to ask if I’m okay and need help. And don’t get me started on people freaking out over me being out alone at night in a sketchy part of town.” —

“Female friendships are weird af. Guy friendships were just straight up bullying each other consensually they were so much easier.” —

“I transitioned really young (early teens). Even then I recognised the dynamic of adults treating me like a trouble maker when I was a boy, to almost going out of their way to protect me as a girl. For example teachers at school treating me like a nuisance to teachers in high school really helping me with school work and my career aspirations.” —

“As a ‘passing’ almost fully transitioned male, I’ve been told to suck up my mental problems A LOT more (and by that I mean even more then a lot) then when I looked like a female.”

“The very first time I went out in public dressed femininely after I came out, I had two other women say nice things about my outfit. I was stunned. In all the previous more than thirty years of dressing like a man, I can’t think of a single time a man complimented me on my clothes. And I’ve always been pretty fashionable, no matter what gender I’m dressing for. Now I almost expect it. I know what outfits and looks I have that will always get other women to compliment me. It’s wild.”

14. Not Being Taken Seriously

“I’m a game developer and probably know more about video games than most people. As a guy if I said I was a fan of this or that series it would basically be taken uncritically. Now, as a woman, in groups of mostly men when I say ‘I really like Metal Gear Solid’ there’s a weirdly high incidence of dudes feeling the need to quiz me to prove that I’m a ‘real’ fan. I mean catcalls and generally not being as safe in public also sucks, but we all knew about that stuff. The weird part was just not being taken seriously anymore on stuff I’m actually quite knowledgeable on.” —

“One of my close friends (mtf) was shocked when she started taking hormones because she was suddenly getting hangry all the time. She said something like, ‘I thought I knew what hangry meant, but this is a whole other level. I’ve started carrying snacks in my purse and I am so sorry to all the ladies in my life if I didn’t take you seriously enough when you said you needed to eat. I get it now, it’s way more intense than I ever experienced before hormones.'” —