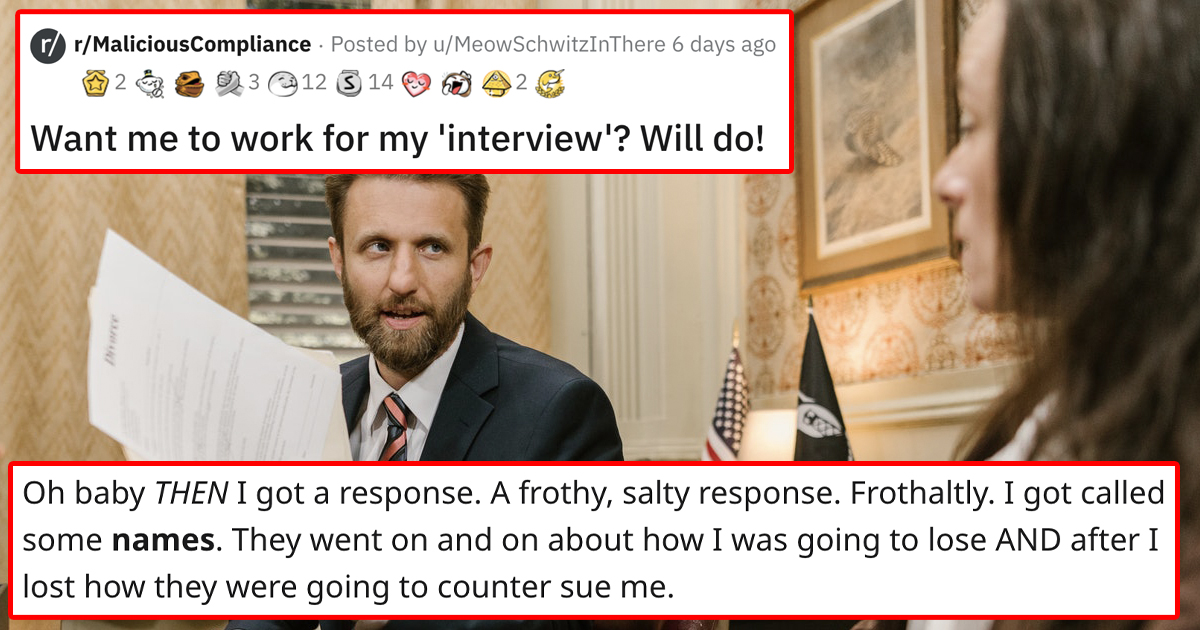 Applying for a job can be nerve-wracking. But also? Apparently, a lot of jobs are fond of using your interview materials for their own purposes and not compensating you!

Most of the time interviewees won’t ever know, but one lawyer on Reddit caught a firm in a pretty sketchy situation — and took them to the bank.

“Disclaimer: Nothing in this post is legal advice. I’m a lawyer but not your lawyer. Please do not take legal advice from internet randos. Background: I mostly work in a niche-ish area of law called discovery. Basically when someone starts a legal proceeding each party gets to ask other parties for certain documents relevant to the case. Sometimes parties refuse to produce certain documents because of reasons like attorney-client privilege. I argue why my clients’ documents are properly withheld or the other sides’ documents are improperly withheld,” the OP writes.

“One day I see a job board post from a local law firm looking for a research/writing position with required experience in discovery disputes. This raises a red flag for two reasons. First, local law firms normally do not need to hire full time R&W people because >95% of that firms cases are very similar (i.e. a personal injury firm normally only handles personal injury cases, so keeping a full time researcher is not worthwhile when all your cases are basically the same). When these local firms need something researched they either just do it themselves or pay someone else for a few hours of work. Second, this local firm hired a friend of mine by telling them ‘start here, work hard, and move up to senior associate in a few years’ before promptly letting them go after a few busy months.”

“I go ahead and send my resume over and get scheduled for an interview pretty quickly. During the interview I gave them a fairly high salary ask which they agreed to almost instantly (itsatrap.jpg). Then the partner hits me with the following:

Partner: We ask all candidates to provide a writing sample before the final interview.

Me: Sure thing. I thought I attached one to the application, but let me grab my phone and double check.

P: Oh not that writing sample, that is too generic for evaluation. Here is a legal question that we want you to research.

M: I see. More than happy to do that at an hourly rate.

P: It should be fairly quick work. No other candidate has asked us for writing-sample-compensation, and this makes it seem like you won’t be a team player. If you aren’t interested in the position just tell us.

M: Let me think about it.

“So I go home and search a couple of local court dockets and wouldn’t you know it this firm is involved in a case with a hearing set on exactly the discovery question they want me to produce a free ‘writing sample’ on. I send an email back saying sure thing I will make the writing sample, as long as it guarantees consideration for the R&W position. They say yes. I write a fantastic memo and send it in.”

“A few weeks go by and I email asking for an update on the final interview. No response. Then I check that court docket and wouldn’t you know it they straight up copy/pasted parts of my memo in the response. I send a demand letter for payment + fees. No response. I file a lawsuit for fraud. Oh baby THEN I got a response. A frothy, salty response. I got called some names. They went on and on about how I was going to lose AND after I lost how they were going to counter sue me. I said ‘sounds good, can’t wait to lose. I guess you did hire a full time R&W attorney. I mean, it would be like baby-town frolics easy to win if you never hired for that position. Actually, it would be even easier if you never even had a final interview for the spot. I’m sure you aren’t that dumb though.’ Got the check 30 days later.”

Redditors responded and also shared their experiences with similar situations.

“I like your style. The only interview I had that asked me to do some work actually presented me with a long closed case, and the work they asked for was simply to determine if I actually knew the matter or if I claimed I knew it well but actually had to spend hours researching just to be able to argue simple points about it. It didn’t take me more than a page to complete it. Your story is the legal version of ‘enter this contest, submit your idea of our logo! We will use the best one and the winner will get a lollipop,'” said

“I don’t understand how LAWYERS think that they could trick another LAWYER by BREAKING THE LAW. I mean, I know idiots can become lawyers, but damn,” said

“That is shady as hell. I can imagine some people would be intimidated by the bluster, but another lawyer would be used to pressing ‘hold’ on the panic button and thinking through it. What are the chances that the smoke & mirrors will cut it then? Pure lunacy,” said

“Law Society threatened to sue me in defamation if I said they turned a blind eye to a certain money laundering method. While saying IN WRITING why they did exactly that. Stupid and being paid for being stupid,” shared