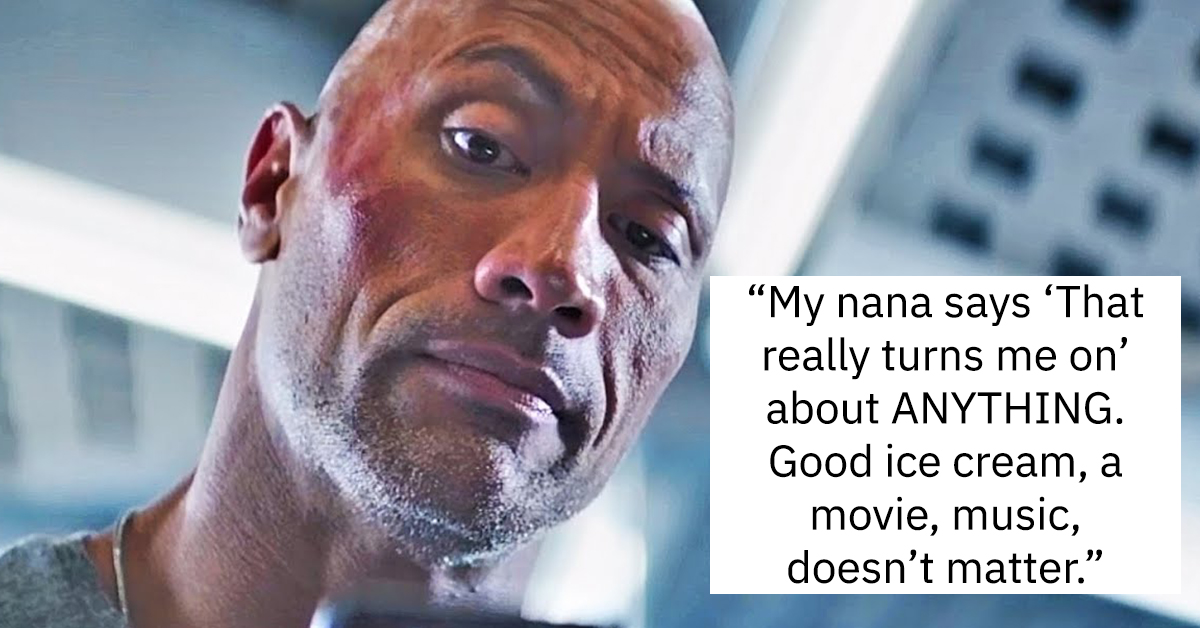 If you’re old and worried that you use outdated phrases, well “you’ve got mail.” By mail, I mean I have an article for you to read.

Someone took to Reddit to ask “What is an outdated word or phrase an older family member uses that makes your brain hurt?” Hundreds of answers poured. It was a veritable deluge.

This is why I only use words featured in Billboard’s Top 100 songs. I can’t lose touch with the youth!

Here are the best replies to the question “What is an outdated word or phrase an older family member uses?”:

“My nana says “That really turns me on” about ANYTHING. Good ice cream, a movie, music, doesn’t matter.” –spinkyrinky

“There was an older gentleman, about 70, that I used to work with that looked at me and said “His butter done slid off his biscuit” referring to another coworker acting crazy. I’m in southern Kentucky.” –Awerunner

“My mom was not a fan of colorful language, I can’t recall ever hearing an f-bomb escape her lips. But if she was mad at someone, she would say “They can just go piss up a rope!” I still don’t know WTF she meant.” –nachobitxh

“When I was a kid and we had a slow start to our day my mother would say “we’re off like a herd of turtles” still makes me smile.” –kurtsta

“My dad used to say ‘That’ll put lead in your pencil.'” –FactoryV4

“When my grandpa had to take a piss, he would say ‘I gotta go see a man about a horse.'” –thebigcrawdad

“50/50 chance my mom is gonna say “and we’re off like a dirty shirt” when leaving an establishment.” –Moonflufff

9. The Xerox of couches!

“Davenport” to mean couch. Apparently, it was a name-brand couch back in the day.” –bradradio

10. If you can make it cute, alcoholism seems fine.

“My mother used to say “he’s got his wobbly boots on” whenever she saw someone drunk.” –kiss_my_what

11. Who hasn’t found themselves on the wrong end from time to time?

“My late father (born in ’33) used to say he’d been “dicked by the dangling dong of destiny” when something went wrong that was out of his control.” –mourninglark

“My grandmother always said I was a “fart in a skillet”. Along with wishing with one hand and shitting in another, see which one fills up first.” –thatstaceygirl

13. Who would marry the devil though?

“The devil’s been beatin’ his wife”- when the sun is out but it’s still raining. I heard this a lot growing up but apparently some people have never heard of it?” –confused_enby102

“Went into a speed shop the other day and overheard the shop owner talking to someone on the phone. Man was 60+ and said un-ironically “Catch ya on the flip side Daddio” to end the conversation he was having.” –ampd1450

“You can call me anything you like except late for dinner!

I use this all the time and my wife tells me that’s something only old men say.” –Flashy_Concern_4676

“It’s hotter than a blistered dick in a wool sock.” –CoolWalrus2085

“If ifs and buts were candies and nuts, we’d all have a merry Christmas.” –

“More funny than brain hurting, but when my grandma is talking about cold weather she has always said: “It’s colder than a witches tit out there!” I’ve been using this one for years now.” –NogEggz

“Slicker than cat shit on a glass door knob.” –CreativeRip806

“When I would pout around my Granny, she always said, “Keep it up and I’ll set a rooster on your lip.” Always drove me nuts bc I could not for the life of me figure out wtf that meant. I think I was in my late 20s before I actually understood it.” –HappyElephant82

21. The Midwest is upsetting for many reasons.

“My older relatives in Michigan (all dead now) used to say Geez-O-Pete instead of Jesus Christ, I guess so as not to blaspheme? Who fucking knows?” –motown_missile

“My mom says she’s “gotta go tink tink” instead of to the bathroom.” –VividTangerine

“My nana always said the world is going to hell in a hand basket and I never understood where that came from.” –jesneko3

He means “I need to go online to check my email”

“My grandfather always used to say “What the Sam hill!?” whenever he was mad or perplexed. I’ve adopted the saying as well because it’s fun to yell.” –yodes08