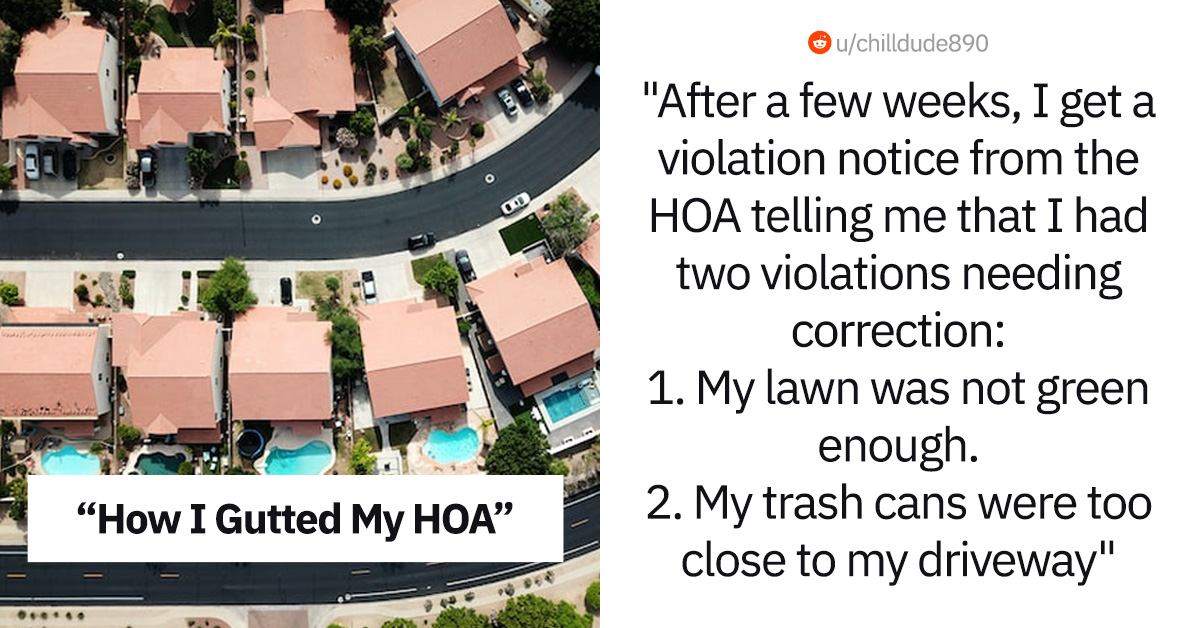 Homeowners Associations or HOAs are often criticized for being overly controlling and enforcing trivial regulations, which lead one homeowner to seek petty revenge.

They shared a story on Reddit about how they stood up to a particularly oppressive HOA in their neighborhood. The HOA had fined them $200 for a minor infraction and the Vice President of the HOA was rude and arrogant. The Redditor decided to fight back by using the HOA’s own rules against them, in the most peaceful and lawful way possible.

HOAs are often known for their strict regulations, but residents don’t have to accept them without a fight. By devising and executing a clever strategy, individuals can push back against these rules. Leading to petty revenge.

A Reddit user named u/chilldude890 bought a house in a neighborhood with a Homeowners Association (HOA).

They chose the neighborhood because it had the lowest HOA dues, the fewest rules, and the nicest house within their budget. However, they soon received violations for seemingly minor infractions such as not having a green enough lawn and having their trash cans too close to the driveway.

In response, the Redditor shared a story on Reddit about how they took action against the corrupt HOA board members and successfully turned the HOA into an organization that truly served the community.

OP decided to start by sharing some backstory: 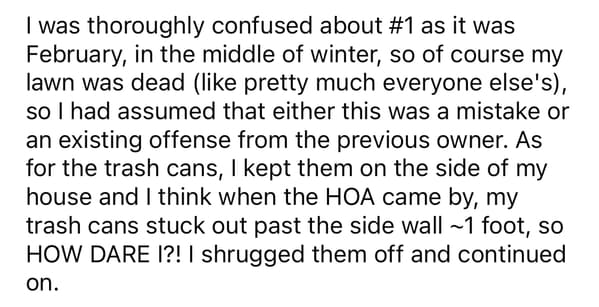 The Reddit user, u/chilldude890, initially ignored the violations but was later fined $100 for each infraction the following month. Recognizing the severity of the situation, they took action by making calls and discovering they could appeal their fine to the HOA board by attending their annual meeting.

It all began with two ridiculous fines, each costing $100, which OP received. 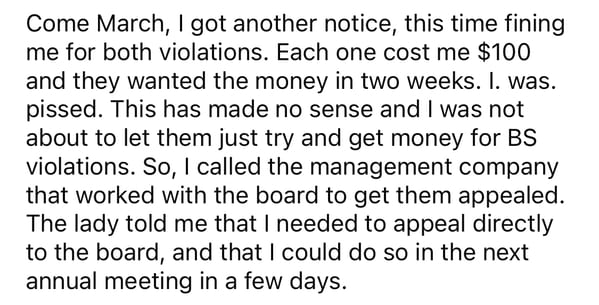 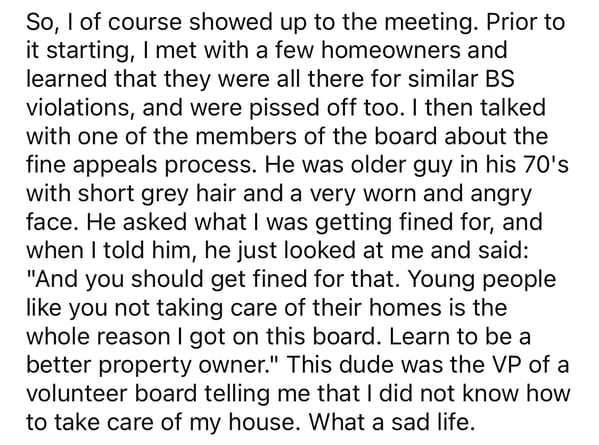 Prior to the meeting, the Reddit user discovered that they were not alone in receiving fines for nonsensical violations. They also had the opportunity to speak with a board member, who happened to be the current Vice President of the HOA.

Unfortunately, the VP was an older man who treated the user disrespectfully, further exacerbating the situation. However, things took a turn for the better at the meeting. The agenda included voting for three new board members. While there were some pre-selected candidates, attendees could also nominate someone on the spot.

The Reddit user nominated themselves and won the vote by a significant margin. This unexpected outcome led them to realize that they could make a greater impact by working from within the HOA and improving the community. 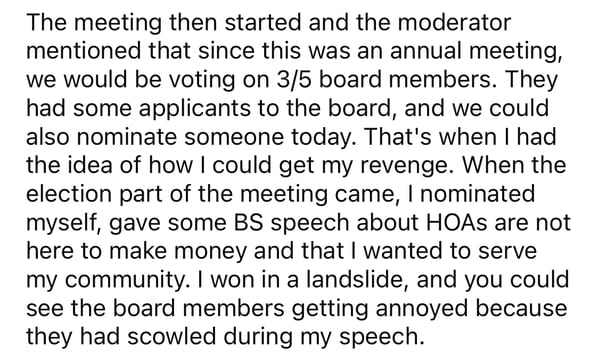 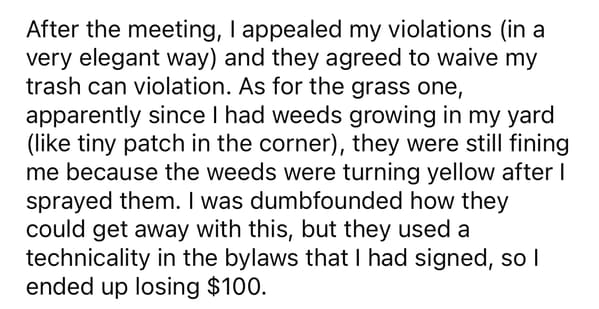 By becoming a member of the HOA board, they believed they could remove the other board members and implement changes. Here’s where the petty revenge comes in. 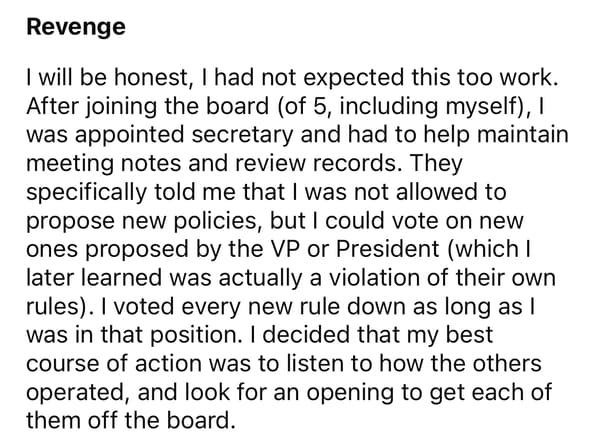 They devised a plan to take down corrupt members of the HOA board. They first learned the ropes and looked for opportunities to eliminate board members. They found violations that board members were committing and organized a mob to remove them.

The President wanted to control neighbors’ outdoor decorations, the Treasurer and Director were swayed by public opinion, and the VP received the worst consequences. As each member was removed, the user replaced them with their own suggestions.

The new HOA member, who began with the support of the president, had her hopes of implementing laws regulating flower colors dashed by him. 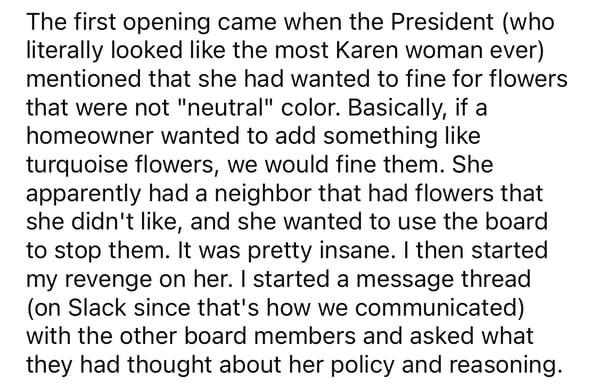 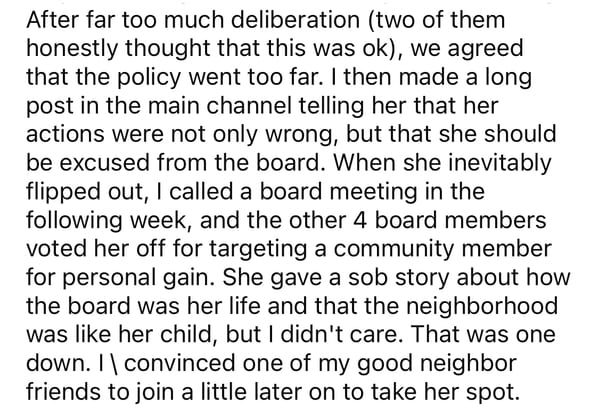 The following situation involved two individuals, the treasurer and the director, being undermined by their own weaknesses of being susceptible to public influence. 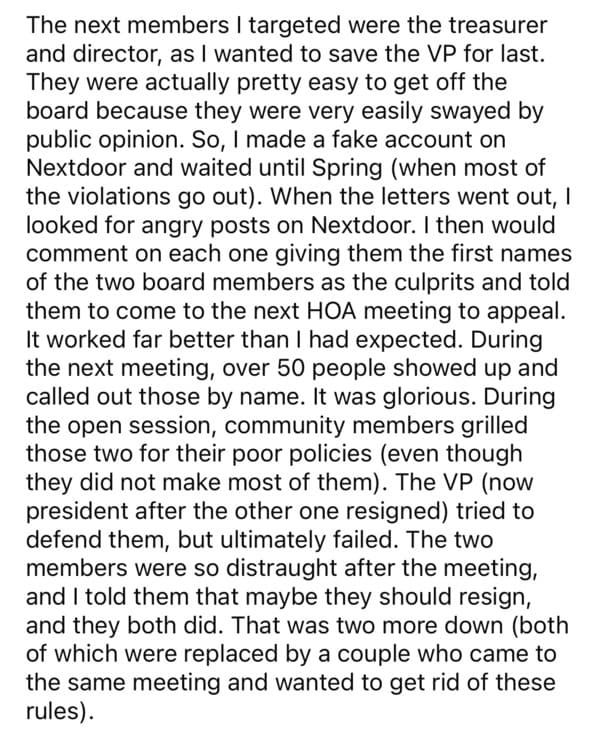 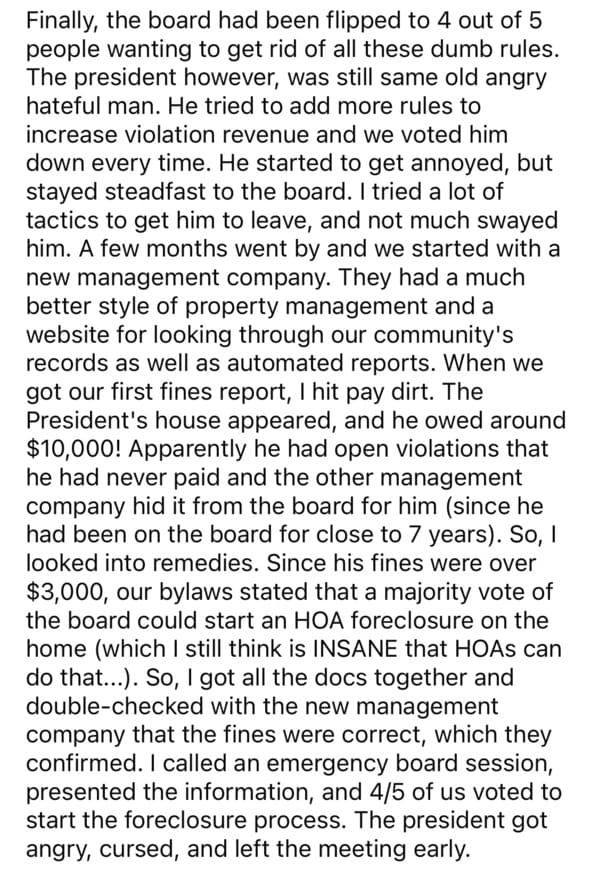 The story concludes with a happy ending where the person who initiated the events becomes president and improves the HOA. 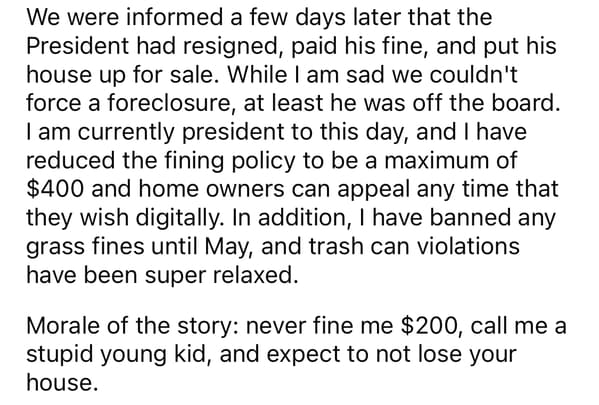