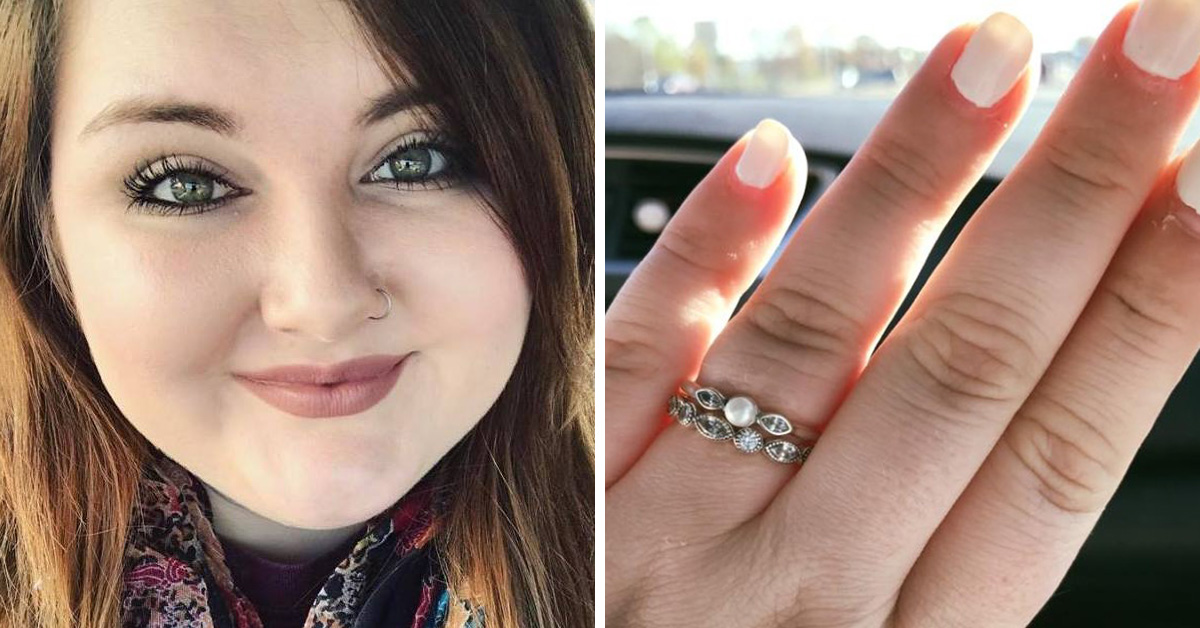 Engagement rings are a symbol of a promise to get married; they represent the union between two people who plan to stay together, through thick and thin, until death, or at least until divorce. The ring itself is important to some people, but not so much to others. Some people can afford to drop a substantial amount of money on an engagement ring, while others can’t or just don’t want to, because they’d rather use the money for something else, like the wedding rings, the wedding, the honeymoon, or any number of other expenses. After all, a diamond is just a thing. It’s a pretty thing, but it’s still just a thing.

Ariel Desiree McRae of Nashville, TN, wasn’t especially concerned with what kind of engagement ring her guy bought her, she was just thrilled to be getting married to him. In a lengthy post on Facebook’s Love What Matters, she wrote about how happy she was when she and her fiance went to Pandora to buy the ring. Unfortunately, a rude and shallow salesperson at the store almost ruined the experience for them when she called the ring they were about to buy “pathetic.” "My husband doesn't have a lot, neither of us do. We scrape and scrape to pay bills and put food in our bellies, but…

Posted by Love What Matters on Thursday, December 1, 2016

“My husband doesn’t have a lot, neither of us do. We scrape and scrape to pay bills and put food in our bellies, but after almost 2 years of dating we decided that we couldn’t wait anymore, so we didn’t.

I wasn’t even thinking about rings, I just wanted to marry my best friend, but he wouldn’t have it. He scraped up just enough money to buy me two matching rings from Pandora. Sterling silver and CZ to be exact. That’s what sits on my ring finger, and I am so in love with them.

While we were purchasing my rings however, another lady that was working there came over to help the lady selling them to us. She said, ‘Y’all can you believe that some men get these as engagement rings? How pathetic.’ When she said that I watched my now husband’s face fall. He already felt bad because he couldn’t afford the pear-shaped set that so obviously had my heart and covered my Pinterest page. He already felt like a failure, asking me again and again ‘Are you sure you’ll be happy with these? Are you sure this is okay?’ He was so upset at the idea of not making me happy enough and of me not wanting to marry him because my rings didn’t cost enough money or weren’t flashy enough.

Old Ariel would have ripped that woman a new one. Mature Ariel said, ‘It isn’t the ring that matters, it is the love that goes into buying one that is.’ We bought the rings and left.

Y’all I would have gotten married to this man if it had been a 25¢ gum ball machine ring. When did our nation fall so far to think the only way a man can truly love a woman is if he buys her $3,000+ jewelry and makes a public decree of his affection with said flashy ring? Sure they are nice, sure the sentiment is wonderful and I’m not trying to cut down any of your experiences, but when did it come to all that? Why do material possessions equate love??

My husband was so afraid of me not wanting him because he couldn’t afford a piece of jewelry. He was afraid that the love I have for him would pale because he couldn’t afford the wedding set I wanted. The world has made it this way and it is so sad. Ultimately we couldn’t wait any longer.. so we eloped. I’ve never been this happy in my life and I couldn’t imagine spending it with anyone else ever. Here I am, Court-House married, $130 ring set, the love of my life by my side and happier than I could ever imagine.” After her post went viral, McRae added an update:

“This post keeps growing much to my surprise, and I’ve been asked a thousand times how we met. So here is the short version! My husband and I met online at the age of 20, talked on the phone (and I mean actually talked not text) for 6+ hours a day for two days. He then drove an hour out of his way to take me on a date. I wore a tacky Christmas sweater (if you think I am lying, ask him) We ate wings, had a burping contest, and drove around listening to music and singing. I fell in love with him on the first date.”

People on Facebook really loved the post and many responded with stories (and pictures!) of their own. Awww, that is just so much love!

McRae also spoke to Today and said that she was “blown away and inspired” by all the attention her post received. “I’ve received so many messages from people telling me that I gave them the courage to finally propose or get married, even if they couldn’t afford a ring. It’s been overwhelming and emotional that I’ve been able to help other people.”

“People shouldn’t have to go into debt for love. It’s the love that’s important. You can get married without rings. Its just material,” she added.