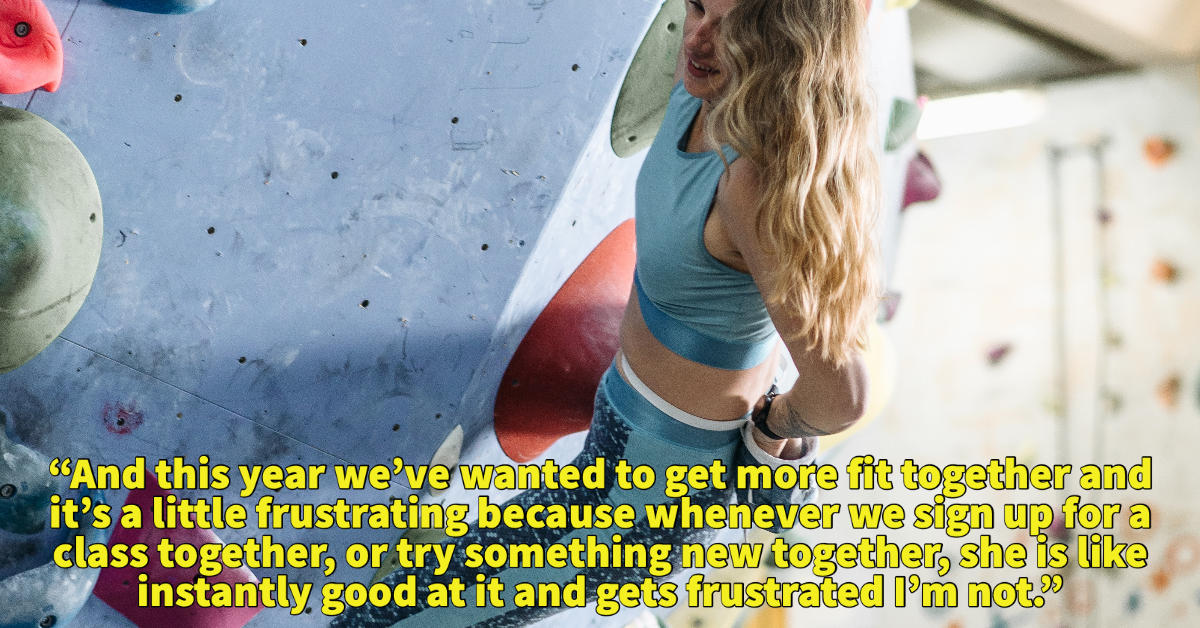 Doing activities with your partner can be a lot of fun and a good way to connect with each other. But what happens if your partner is just better at everything? And not just that — they are openly frustrated with your abilities? Can you still have a great time?

One Redditor with a girlfriend who is really smart and doesn’t have to try much at the things they do together is dealing with that exact situation. Every time the two of them try something new together, it’s pretty easy for her to succeed while he struggles. What should he do?

“My girlfriend and I have been together for about a year, and honestly she’s just really smart. Like she told me she barely passed highschool because she didn’t really care, but she took a gap year and got into college as a later in life student and just decided to do engineering? And she did fine and got high honors every year? Like I genuinely don’t know how she does it but she doesn’t pay attention or try at a lot but when she actually does pay attention to something she masters it pretty fast. Like I swear she lives on easy mode, she works like 1 or 2 hours a day at her job, makes a full-time salary, and says she gets everything her bosses ask for done in that little time so why work more? She’s been doing this for like 6 years across different jobs and for a while I thought she might be getting close to getting fired, but no she got offered a promotion?”

“And this year we’ve wanted to get more fit together and it’s a little frustrating because whenever we sign up for a class together, or try something new together, she is like instantly good at it and gets frustrated I’m not. Like we went roller skating and she just threw herself into it, wiped out like 10 times, then got it down. I was trying to be a little more careful because I’m a bigger guy and couldn’t take all those falls, and she started to get annoyed saying I wasn’t ever gonna learn if I didn’t take some risks.”

“This week, we started rock climbing and were taking a class on belaying, and each time the instructor showed us a new knot, she just did it instantly right along with the coach. And when we were setting up to climb, she kept on being like ‘no not like that’ when I was tying in and when I got frustrated she’d just reach over and redo my knots she got mad and told me that if I was holding her 40 feet up I better start paying attention. I felt frustrated and hurt because I was doing my best, I would have just preferred if she let the coach correct me.”

“I got home after climbing and told her that I was getting frustrated that just because stuff comes easy to her and she gets it instantly doesn’t mean she can talk down to me. She got frustrated and said that’s fine if we’re talking about painting or some sh*t, but when she’s depending on me for her safety, I can’t screw it up, I need to pay attention. I told her most people aren’t like her, I feel like she’s been able to do anything she actually paid attention to, but for some of us it takes a little more time. She was like “He literally showed you how to tie off 5 times, like if you can’t get it by then, maybe you should of told me instead of just screwing around.” I feel frustrated because I wasn’t trying to screw around, and I feel like she always looks down on me or thinks I’m not trying. AITA for how I acted at the climbing class and for my frustrations with my girlfriend?”

“NAH sounds like the climbing trip brought this issue to a head, and it’s a tough one! It’s hard on both sides, I am sure. She has probably noticed that it takes you a little longer to get things, and worries that in a crisis that requires quick-thinking she won’t be able to rely on you. You probably worry that you’ll feel left behind, and that your own good qualities are overshadowed. Yet if she’s with you, there must be something she values in you. What are your good qualities that you bring? For me my husband’s steadiness, kindness, and good humor are my rock. Achievements come easily to me, much like your GF, but it would all be pretty hollow without love. Also, a lot of us quick thinkers have brains that work like ‘catch and release’ fishing. I learn quick, then let it go. But my husband jokes his brain is like Fort Knox. Its hard to get new stuff in there, but once learned its locked in forever. So as we age I find myself turning to him more and more for his repository of knowledge, just as he relies on me to grasp and interpret new things. I hope you too find a balance that works for you!” —

“The YTA comments seem to jump straight to jealousy without considering how frustrating it can be if you’re impatiently corrected by someone who may be able to quickly grasp something, but not necessarily good at explaining it. I’d say they need to have a conversation about, well, conversing with each other.” —

“YTA – so you have landed a smart amazing woman who works hard and succeeds and you have the nerve to be angry and jealous about it instead of just being grateful you get to be a part of her life.” —

“ESH. I feel like most of the y t a s are overlooking the fact that the girlfriend is upset with him for not picking things up as fast as her. He clarified in a comment that his mistake with the knots would have been corrected by the instructor before they ever climbed. It wouldn’t have put her in danger. Even so, insulting your partner and immediately criticizing their efforts isn’t the way to communicate if she’s nervous about it. She could have politely said “hey OP, I think this knot is tied a little incorrectly. Could I show you how I did mine or did you want to ask the instructor to review it again?” I don’t think she needs to pander to his insecurities or jealousy, but I also don’t think she’s showing him much respect or compassion. It sounds to me like you’re both frustrated with the other for not understanding each other’s learning ability. She’s naturally gifted and it sounds like she has a lot of practical intelligence. You take more time to pick things up and it sounds like new skills don’t come as intuitively to you. I think you do sound jealous of your girlfriend, but she’s also inconsiderate of the fact that you take more time to learn things. She shouldn’t belittle you and you shouldn’t resent her. You need to have an open conversation about how you feel. Don’t attack her for her success, but explain how her disparaging remarks make you feel. Maybe you can also reach out to her for help more in the future. Rather than being upset that she’s progressing faster, ask her if she could explain something or request a little support until you catch up. You need to get over your insecurities and she needs to understand that not everyone has the same level of ability. Now if she’s still belittling you for not being as quick/talented as her, then it’s not on you. Have a conversation and see where it goes.” —

“NTA, but your title doesn’t accurately convey the situation. You’re not upset that she picks up on things faster, you’re upset that she is actively rude and condescending to you. She needs to learn to be more patient, and interact with you in a kinder way. Plus, as someone else mentioned, her taking it away from you and doing it for you keeps you from learning how to do it correctly, which is more dangerous in the long run. (Some Y T A for saying you think she has it easy; that part just made you sound jealous and resentful. We all have different struggles; if you love her, don’t get bogged down in comparisons, just be happy for her.)” —