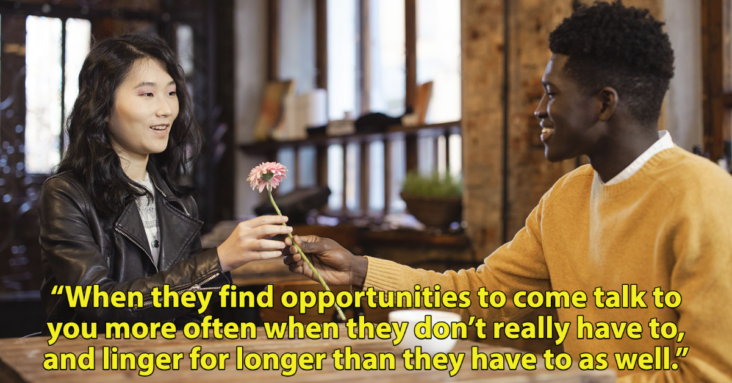 Apparently, flirting is an art. Some folks have mastered it, others have not.

On Reddit, people who are good at flirting are sharing their secrets.

And there might be some tidbits here that help you if you’re floundering.

But a word of caution—lots of these behaviors could indicate totally normal interest instead of romantic interest (I mean, I look intently at my friends when they are talking to me. Who doesn’t?). So it’s always best to just communicate.

We’re all adults here, not birds at the zoo waving their tail feathers around in some mating ritual that isn’t enticing a partner at all.

“Be wary of a one-sided conversation. If your responses are met with mostly ‘yeps’ and ‘uh huh’ and nothing without meat, it’s probably not going well.” — ViciousKnids

“Flirting didn’t click for me until I heard it described not as a set of behaviors to look out for, but as an escalation of suggestive behaviors couched in plausible deniability. Put practically, if someone is doing something to engage you that feels extra (lots of touching, looking at you in a way that feels a bit to long, or doing a lot of poking fun and complimenting you), then that might be flirting or it might not. That’s the whole point. Plausible deniability. They can safely disengage at any time. If you want to know if someone’s flirting, you need to test it. You do that by escalating things, but just a bit, so that now you have plausible deniability (touch them back in a comfortable way, maintain eye contact, or joke-compliment them back). If they escalate back and continue to do so as you escalate in turn, that is flirting. Eventually one of you will break cover and do something with clear intent (a kiss, an approach + ask for a number, or straight up telling them what you think of them and that you’re interested). Otherwise, if you escalate and they don’t change their behavior or they back off, then they were probably just being friendly and you should take the hint and do the same.” — three_furballs

“If you’re in a group of friends (new or old), find a natural opportunity to hang back. Someone who’s interested in you will notice and take the opportunity to talk to you in private. Now this isn’t full proof but it’ll at least give you the opportunity to feel for any chemistry between you.” — Kagamid

“If they look directly at you while talking to their friend it’s a good sign.” — yassis_bru

5. They Laugh At Your Lame Jokes

“They make a lot of eye contact. They are interested in what you have to say and ask you lots of questions. They laugh at your jokes, even the lame ones. They initiate physical contact. They try to find space where you can talk more privately (this does not always mean sex but it often means they wish for more quality time with you).” — TheSurfingRaichu

6. Observe Who They Look At

“I read once that if someone looks at you after someone (doesn’t have to be you) said something funny and everyone is laughing, they like you. From personal experience, it’s true.” — luv_sicK

7. Invite Them To Something They Don’t Want To Do

“When you think someone likes you, you can test that theory in a few ways. A subtle but effective example is inviting them to something you know they can’t or don’t want to attend. If they express interest in rescheduling or finding some other way to spend time with you, they like you. Otherwise they’ll just say no, sorry I can’t make it. This works because you’re showing interest in spending additional time with them (this event would be more enjoyable for me if you where there) and if they like you they will be sure to make it clear that they are saying no to the event, not to you. Of course, you could also just ask. In my experience anyone worth getting intimate with is mature enough to deal with that question.” — MildlyWyld

“Physical contact. Granted, not everyone flirts the same way but a good sign is if they touch your arm (or the like) or you find them smiling the whole time that you’re talking to them.” — Cosmic_Barman

“When they find opportunities to come talk to you more often when they don’t really have to, and linger for longer than they have to as well.” — Ophidia77

“It really depends on who you’re talking to. My advice is to be observant. Some, would prefer banters. Usually, when coming up with something witty, they return back what you said but relating it in a playful or opposing manner (I hope you get what I mean) or playfully challenging your views. When it comes to touch, subtle touch on the arm or shoulders or patting the head and smile. Trying means to be with you is also a sign, but some are a lil more low key (like me), that’ll probably prefer showing a playful side when it’s just alone. So, it is also a sign if they change their aura from normal/serious to playful when it’s just you alone.” — 83rdstreet