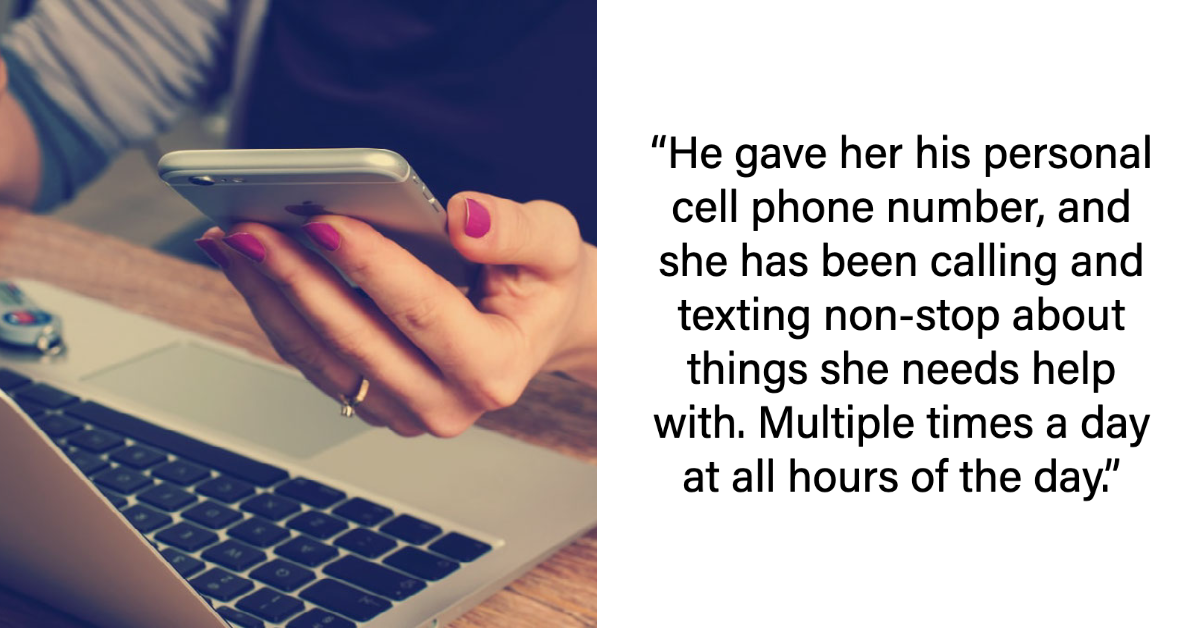 If you suspect that someone at work is hitting on your significant other but they either think there isn’t a problem or are completely oblivious, what should you do?

One Redditor is at the end of her rope concerning her husband and his coworker who calls him constantly—and I mean constantly—asking him to help her with things around the house.

She’s either completely incapable of doing anything for herself or she is obsessed. The obvious questions are: is he cheating on his wife? Or is he really that dense?

“My (37f) husband (40m) has been working at his company for 10 years as a maintenance supervisor. About a year ago they hired Tabitha* to work in their accounting department. Since the day she first started working there, she has had an infatuation with my husband that is now becoming unprofessional and inappropriate,” the OP writes.

She explains that Tabitha is always calling him on his work phone to do mundane tasks around her office. And at the Christmas party, she was very flirtatious.

“When we sat at the table she damn near pushed me out of my seat to sit next to him, and my husband told her to get up that it was my seat. She walked off in a huff, and when she saw me in the restroom she shoved past me. I told my husband what happened and he said it was fine, that she was harmless. I told him that she was not fine, and that she clearly had feelings for him and she was acting like a jealous girlfriend.”

“The past few weeks this has ramped up to an astonishing level of inappropriate. She recently moved into a new house and my husband and some of the other guys from work helped her move and put things together. He gave her his personal cell phone number, and she has been calling and texting non-stop about things she needs help with. Multiple times a day at all hours of the day and night she will call and text him for help. Last night at 2:00AM she called about her heat not working right. My husband said he would go over and look at it after work. I broke down. I told him he was not going, that she could call a technician like everyone else, and that he is not her personal maintenance man.”

The OP thinks her husband is very dense and that when he gave Tabitha his personal phone number, he crossed a line she is uncomfortable with. She started crying and told him that she refused to be the third wheel in her own marriage.

What should the OP do?

“He might be blind to the crush (but, uh, doubtful), but you’re telling him how aggressively she’s treating you.. and he doesn’t seem to care. Trust your gut here, OP. I don’t think you’re on the wrong track with what you’re suspecting,” said Oxbridgecomma.

“It always requires a second look when a woman is acting ir characterised as ‘crazy.’ 1. Either she IS straight up insane. 2. She is also confused, just as OP is. For instance if you were told by a man he was leaving his wife for you, and then he dismissed you when she came to the Xmas party. Or if you talk on the phone constantly, not knowing he tells his wife he’s doing ‘maintenance work’ for you. INFO: OP have you seen his texts, are they definitely about maintenance? Option one could be the case, but consider looking into it. Snoop, work out if he is deleting messages. One pretty direct way if things are still murky is to talk to this woman yourself. If you’re both being lied to, it’ll be obvious,” advised molly_menace.

“You are NTA. Hubs, on the other hand, is a grade-A dyed-in-the-wool jackhole. ANY man who invalidates his wife’s concerns over behavior THIS blatant is either banging side-chick, or is at bare minimum enjoying the attention…but doesn’t want to admit he’s enjoying it. Either way, you’re in the right here and if he doesn’t willingly shove this woman off, you will have some decision-making to do,” said MamaFen.

“It’s hard to convince someone to stop flirty behavior when they haven’t technically done anything wrong yet. Why put a stop to something that stokes our ego and is fun and new when nothing bad happened? So they keep it up and keep pushing until they do fuck up. Because that’s where this road leads, it don’t lead anywhere else. And then its ‘oh I’m sorry’ ‘I love you, please forgive me’ yadda yadda yadda. It takes maturity to put a stop to a behavior because of an outcome that hasn’t occurred yet…So yeah he’s definitely gaslighting her,” observed PuupTA.

“The fact that he went over to her HOUSE and gave her his # AFTER she was rude to you and acting inappropriate says A LOT. It was clearly something you were uncomfortable with and it crossed a line. I think it’s appropriate to put your foot down,” said WanderingWedding.

“NTA and stand firm on this, because I’ve been in your shoes. My husband was far too kind, and far too naive. His ingrained lack of self confidence (I hate his parents for that) made him think there was no way a certain coworker was interested in him. It slowly escalated for about a year. I saw something at his work space one day that set off an alarm inside my head. We talked that night, and it wasn’t an easy discussion. He hated the idea of confronting her, and figured it would just go away since he didn’t reciprocate her feelings. I tried explaining that it hadn’t gone away in a year, and he didn’t see the danger I felt she was capable of. It was the first talk we ever had where we both left feeling like nothing was resolved, but it was late. As I’m about to get in bed, he walks in and tosses his phone on the bed and says three words before he goes to change for bed. “You were right.” I was so confused. Turns out, part of what I saw at his work that day was leading to her boiling point, and she sent a very long, broken-hearted message to him. There was a lot that concerned me, but one part really hit hard: She would have still loved him if he were hers and his face got burned, or he was handicapped. I didn’t tell him “told you so”, but I let him know that I’d do whatever he needed to to help guide him with how to manage the problem moving forward. He set it up to talk with his company and wanted me there. It got resolved, and it never escalated beyond that message. We were lucky,” said DragonCelica.

What do you think the OP should do?