There are certain tropes to the subreddit r/AmItheA**hole that you come to recognize if you spend a lot of time reading it. The people who are most frequently tend to be voted as the a**hole have similar characteristics: they’re entitled, oblivious, rude to women, controlling, and incompetent in life. This post written by u/RedThrowaway1994 seems to be a study in that type of character.

This troll post has united the Internet in hating this horrible dude and it’s what we need right now. He says he and his girlfriend had a fight that has them not talking for over a day:

So a little background on our living situation. We keep different schedules which I know can cause problems in a relationship but for the most part we’ve worked it out. I’ve been writing music and I’m trying to launch a TikTok career so I keep odd hours. My girlfriend has a boring desk job and has been working remotely which has been a bit of a pain for me but I’ve been understanding, especially since she makes close to 6 figures and is covering the rent for us. Thankfully my parents are helping me with my day to day expenses but they are trying to motivate me to get a “real job” so they refuse to pay rent.

Okay. A guy with a ridiculous “day job” around being a social media influencer? And he doesn’t pay rent and his girlfriend pays his rent, but he still complains about her job being boring? it’s the perfect set up.

He goes on to say she woke him up by having a “loud Zoom meeting.” He implies he’s offended by this, because she knew he was “up late with my friends last night (on Discord)” because he left a note asking her not to wake him up before noon

“I’ll admit I was pretty pissed when I stomped out of the bedroom and gave her a dirty look,” he writes. “That was when I got even more triggered.”

Then he gets critical:

She was dressed in one of her nicest business outfits and was wearing full makeup which is not her usual getup. I became immediately suspicious and also I couldn’t go back to sleep which pissed me off even more. So after her meeting I confronted her on the outfit and wanted to know who was in the meeting. It was her boss who is a female and a male co-worker who I’ve seen once before so I know he’s around our age. Obviously her outfit was completely unnecessary and while I can’t prove it, I was convinced it was because of her co-worker.

Honestly I didn’t care that much but it was one of those things that once she tried to deny it I got more pissed. She “claims” she wanted to look professional for her boss but I don’t think her female boss is going to care about how nice her makeup is and that doesn’t explain all the joking and laughing I heard. I accused her of emotional cheating and honestly even it was for the boss, she’s using a superficial method to get ahead which doesn’t seem very dignified to me. That’s where the conversation ended. Just looked at me weird and didn’t say another word so I’m guessing she knows I’m partly right but she’s not acting like it now.

Last night I talked to some of my gaming buddies on Discord and most agreed with me but one of the guys who’s opinion I trust thought I might have been a bit insecure. I’m sure this will blow over and she’s going to apologize or at least talk it out with me but I’d feel better if I got everyone’s opinion here. So AITA? 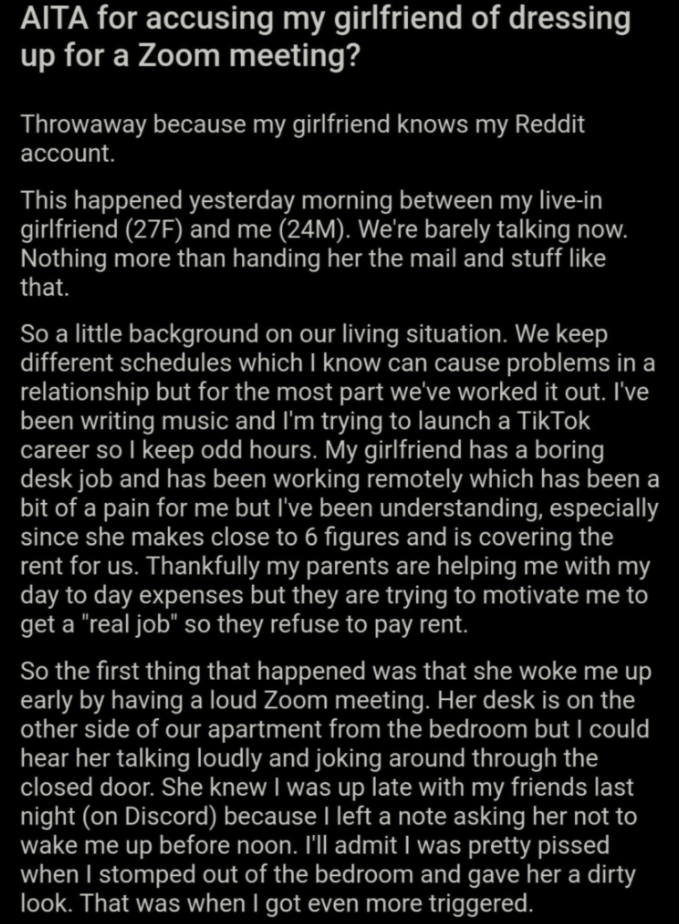 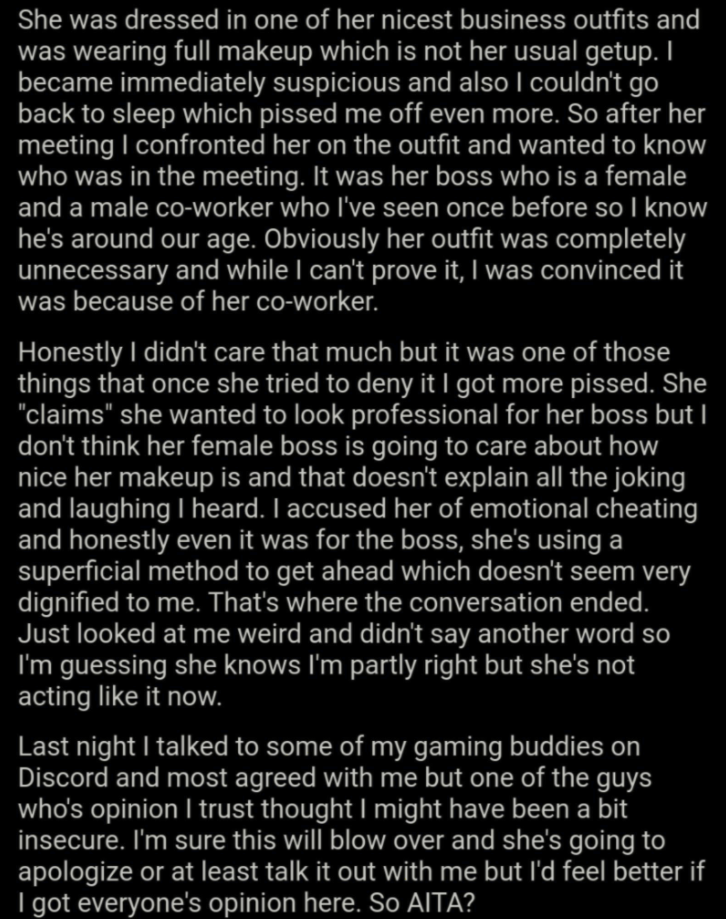 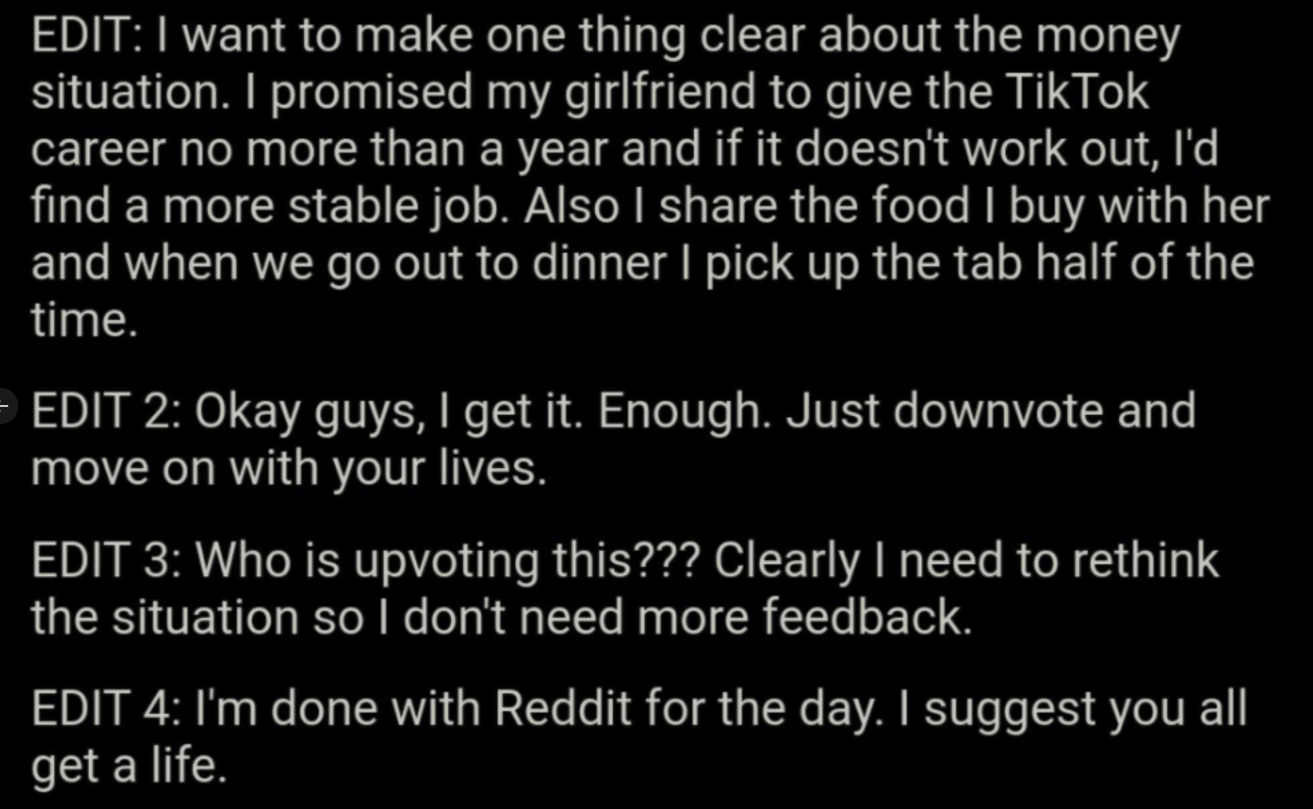 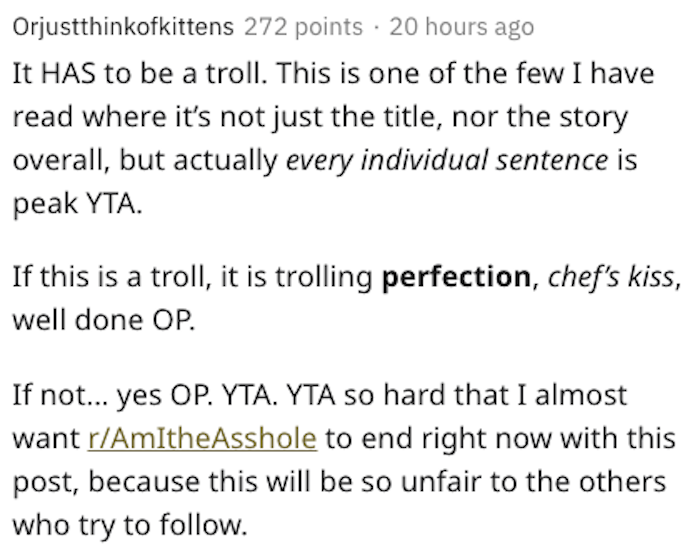 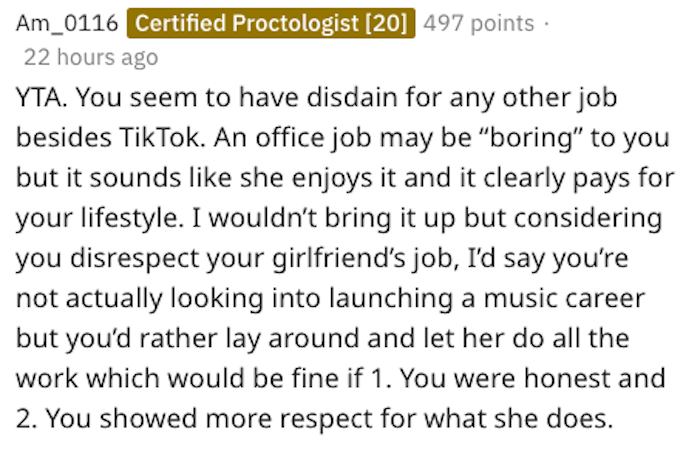 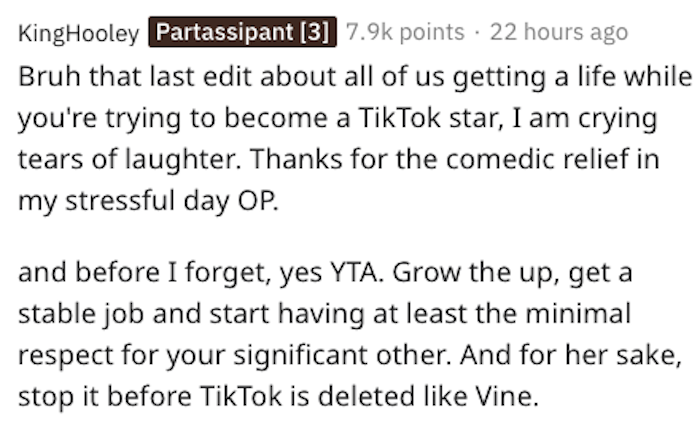 The post was so perfectly executed that it went super-viral on Twitter as well, where it was screen-capped and posted. There, people treated it with more seriousness and basically told the man that he was an a**hole again and again:

She pays the rent

My parents pay for everything else

Her looking professional for a meeting with her boss is emotional cheating and her using superficial stuff to get ahead.

SO MUCH OH NO!

YTA Who knew it could get worse than TikTok career (I SHOULD have known this is AITA) so you’re living rent free in her house, sleeping til noon, AND trying to dictate her appearance? She’s working to pay the rent while you make tiktoks I don’t think you have the right to tell

I hope she dumps OP.

Thank you, whoever wrote this post. If you’re a troll, I think you’d actually be the perfect writer.