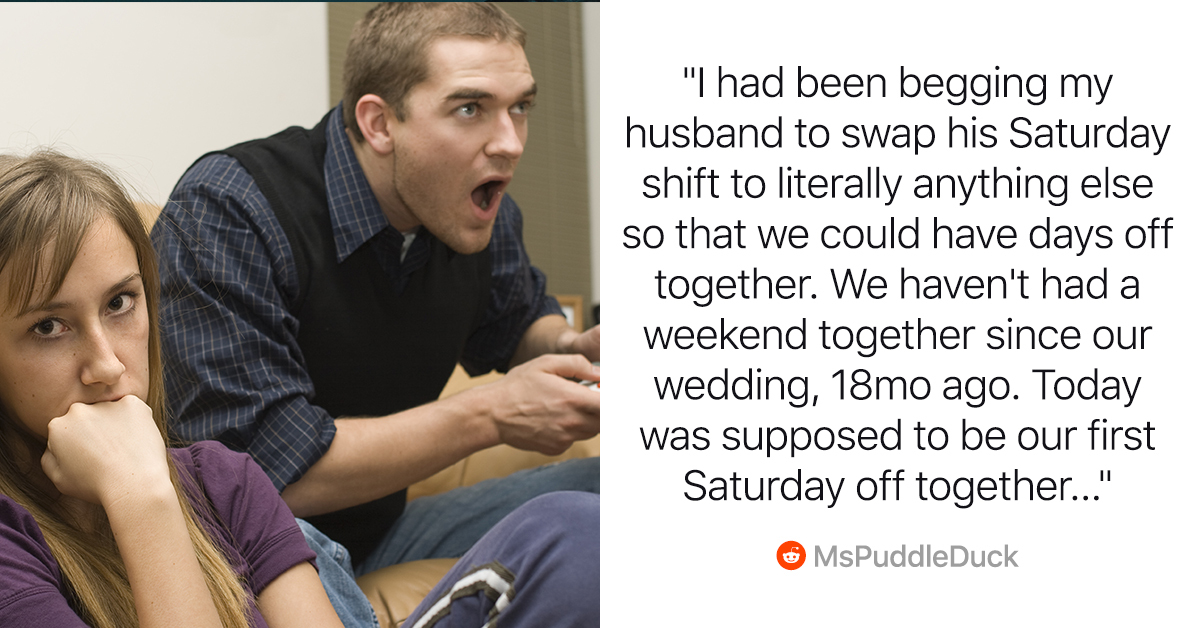 Do you ever feel like your romantic partner spends more time with their friends than you? On Reddit, one hard-working pediatric nurse finally got an opportunity to go out with her husband—and he canceled their plans to spend time with his friend instead. So, she kicked him out of the bedroom. Did she go too far? Or not far enough?

The OP explains that she works 50 hours a week in a pediatric ICU and cries “at least once a week because that sh*t is hard.” Her husband? “Has a degree but isn’t looking for a job. Works 2 days a week at the grocery store. Spends most of his time playing League of Legends.” Her salary pays the bills.

“All events here are in accordance with COVID legislation,” she writes. “Today was supposed to be A Good Day. I had been begging my husband to swap his Saturday shift to literally anything else so that we could have days off together. We haven’t had a weekend together since our wedding, 18mo ago. Today was supposed to be our first Saturday off together. We were going to go to an animal sanctuary.”

“He starts the day by going to breakfast. With his best mate. Leaving before I even wake up. I wake up around 9 and realise he is not home. Call. He says he’s helping his mate set up some lights and that the weather is too rainy for the animal sanctuary anyway. He gets home at 1ish. Lies around. Plays some video games, promising we would cook dinner together tonight. Leaves again at 5 to help the same mate with something else.”

The OP went grocery shopping for their planned dinner. However, once she gets home, she realizes she has left her house keys inside. She calls her husband to come home from his friend’s house 5 mins away to let her in. It starts to rain.

“45 min later, I call again. He hasn’t left yet. He finally agrees to come and let me in the house, so he drives up, presses the clicker to let me in the garage and leaves again,” the OP writes. “At 10, I I called to see where he is. His friend answers. Says he is driving out to do something an hour away.”

“It’s 10.30. I am going to bed. I have sent him a text that I am upset and don’t want to speak to him tonight and would rather he left me alone. As far as I am concerned, if he can’t value me more than his best mate on the first day off he and I have shared in a year and a half, he can go sleep in his bed instead. (Btw, his friend doesn’t work, so they hang out all the time when I am at work).”

Reddit had some choice words for the OP’s husband, and I can’t say I blame them. But they also had some good advice for the OP.

“I’d ban him for more than one night! What kind of thoughtless behaviour! Sounds like there are bigger issues surrounding his job too. Have you spoke to him about finding a full time job? It’s not fair that he’s not pulling his weight,” said rabbit92.

“If he can’t spare one day of his 5 day weekend to spend with his wife who is currently being a frontline hero, he can go live with his friend IMO,” said smolperson.

“Ignoring him won’t fix the relationship if there’s any chance at fixing it, but I’d be so disgusted at this point I’d ask for a separation period and possibly a divorce. He is being rude, disrespectful, not taking care of you, not putting effort into the relationship, not pulling his weight emotionally or financially, and choosing to go spend time with a ‘friend’ (are you sure it was a platonic friend he vanished away with on the one weekend he had with you?) instead of you when he has other days to do that. Girl, life is too short. If you don’t change something soon, whether it’s couples therapy or a divorce, you are going to keep dealing with this trash for the rest of your life,” advised Netteka.

“My first reaction is who’s he seeing on the side? If he’s spending his free time with his mate, is his mate just providing an alibi? When you call and he’s not there, how convenient is the mate’s response,” asked kberson.

“Thats not a husband it’s an over grown child. If he can’t spend 1 day with you in 18 months and chooses to spend that day with his friends then kicking him out of the bedroom isn’t going to change his behaviour. He needs to start making you, his wife a priority or he needs to pack his shit and leave. He doesn’t work and isn’t looking for work. He spends all day every day hanging with friends or gaming while you work your ass off helping others and paying bills. Couples therapy isn’t going to change that as he probably believes you are over reacting and he has done nothing wrong. Sorry to sound harsh but you married a dud. He’s lazy and inconsiderate. Personally I’d throw the whole man away and start again,” BuckieBurd said.

What do you think? Is the OP in a hopeless situation here?