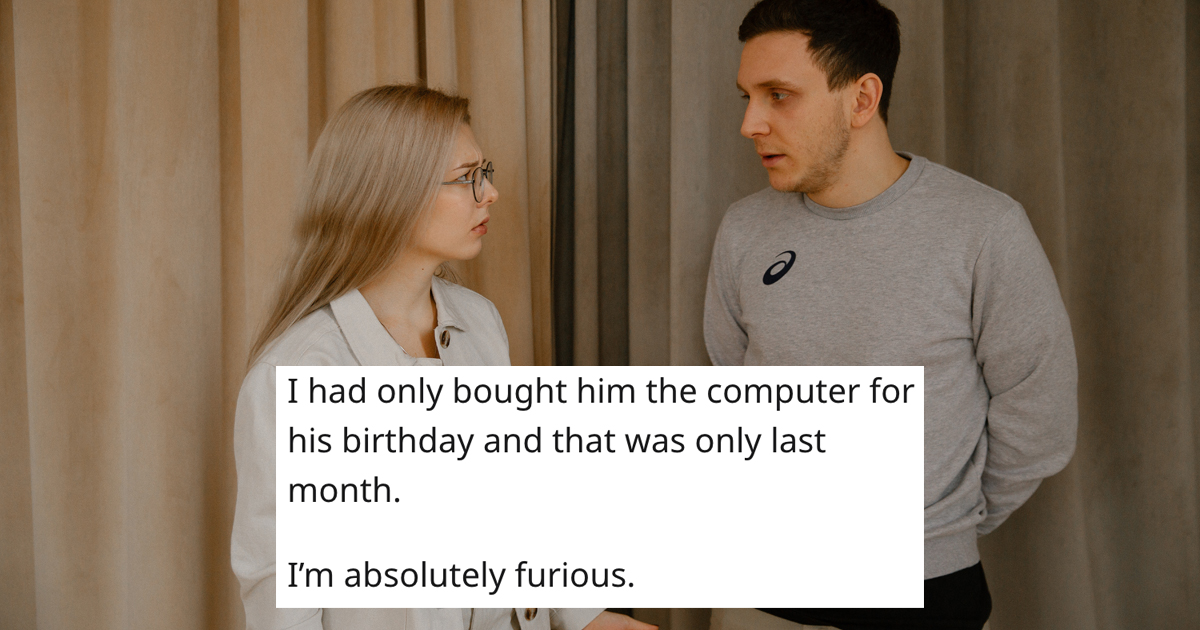 Parents right now are having all sorts of conversations about electronic use for their children. As many people continue working from home (and likely will keep doing so for a while), children are being left to their own devices—and many of those are electronic devices. There’s nothing wrong with having the TV babysit your toddler while you try and get work done during these times, but what if your partner just decided to throw out all the electronics without asking you first? That’s what one Redditor is concerned about—but the story is a bit more complicated.

The OP writes that she’s been with her husband for six years and married for four. They have a five-year-old and three-year-old, and she works “crazy long hours but we’re better off for it and can live very comfortably.” She says that her husband has had an “issue with technology for a while.”

They have “three TVs (one in our room, the kids room and living room) we’ve got one computer, the children have a laptop and a DVD player, we have a phone each and honestly when listing it out it sounds like so much but it wasn’t and I limit the screen time the children get, they usually only watch a film before bed Sat and Sun and a little bit of youtube while eating breakfast.”

One day, the OP comes home from work to a shocking surprise.

“I came home from work to find all of our electronics just gone, he didn’t even apologise and it’s not like he asked for money; he gave away [the] stuff for free. I had only bought him the computer for his birthday and that was only last month. I’m absolutely furious.”

“He told me basically he wanted us to give up electronics, he wanted to live a traditional life including me staying at home and having more children. This is a crazy change of personality and I can’t even talk to him without getting so frustrated, I have tried and I just cried that’s how frustrated I was and he just seems so unaffected. He’s also turning into a political nut job and I can’t even discuss my own views without him screaming me down because I’m ‘fucking ignorant.'”

The OP doesn’t know what to do with this new version of her husband, so she reached out for advice. Folks on Reddit had a few ideas on what to do, including getting his mental and physical health checked out and possibly leaving the house with the children and taking shelter in a safer environment.

“This is exactly what my super controlling father used to do. Electronics were bad, TV was bad, basically anything that gave us free access to ideas other than his? Bad. Of course, when HE decided he wanted it, it was okay to get a TV and DVD player so he could watch HIS favorite movies. But if my mother or any of us kids wanted something besides the radio? Hard nope. Restricting information and outside contact is one of the first things an asshat will do when they decide it’s time to testing what you’ll tolerate from them,” warned Tinmind.

“Massive personality shift aside, he gave away your personal belongings. He unilaterally decided what was best for the ENTIRE family without consulting you, and is aggressively attacking you for not just hopping on board. There’s so much bullshit here, idk where to even start! Frankly, it’s a HUGE problem that he thinks it’s ok to just appoint himself ‘team captain’ and independently make decisions that effect the entire family, without so much as a conversation with you. You guys are supposed to be a team! You’re supposed to be partners, equal partners! Idk wtf he was thinking, but his actions are totally unacceptable. He essentially stole your property, but that’s not even the worst part. The WORST part is that he apparently thinks he’s the one calling the shots and that you are supposed to stfu, hop on board with whatever he’s unilaterally decided, oh and quit your job and stay barefoot and pregnant,” said Katie-MacDonut.

“I’d be really interested to see his phone’s browser history. It sounds like he might have been taken in by the alt-right ‘tradlife/tradwife’ campaigning advocating ‘a return to traditional family values’ like men being the sole breadwinner, etc. if you feel safe, I’d consider sitting down with him and asking where exactly these ideas are coming from,” said femmanisim.

“If his behavior has changed drastically with no explanation, there may be a medical cause such as a brain tumor, and he should visit a doctor. But you can’t force him to do that, and you should not force your children and yourself to endure his abuse while hoping he’ll do that. From your post, it sounds more like he’s simply been influenced by assholes to become an asshole himself. But I don’t know. Just please don’t let you and your children sit around being abused and controlled by a crazy asshole. Do what you need to do to protect your family,” advised HatsAndTopcoats.

“He needs to see both a doctor and a psychiatrist immediately. This is 100% abnormal behaviour and if there have been no other red flags at all of this abusive/controlling behaviour until just recently then I would be willing to bet the stress of the lockdown is triggering a very serious mental health issue or a brain tumor or something is going on that is biologically affecting his behaviour. This kind of thing does not just come completely out of left field without a reason,” said aboo90.

What do you think? Does it sound like the OP’s husband might be suffering from an illness? Or that he’s been radicalized? What should she do?