A simple teen named Dorothy has become the Internet’s hero because of her indomitable spirit and McGuyver-esque dedication to one thing: tweeting. Though her mother is desperately trying to responsibly parent, Dorothy gets around it every time, with everyone’s encouragement. Of course we’re encouraging her! Just like us, Dorothy MUST tweet, even though it is a bad use of her time that is making her life dangerous.

This is her story.

Dorothy tweets from the handle @thankunext327, and until recently she’s mostly been tweeting about Ariana Grande. She’s a Stan. Then, on August 4th, Dorothy tweeted that her mom took her phone.

In an interview with New York Magazine, Dorothy said her mom did so because she “was boiling rice and was too busy on phone and stove burst into flames.”

It seems as though Dorothy’s mom weighed in and tweeted from her Twitter account, saying she saw Dorothy accessed Twitter via her Nintendo. The crafty witch!

Dorothy’s mom, in fear for all their lives, also confiscated the game system. Maybe she thought she shut down Dorothy’s Twitter account as well, but that did not actually happen. She must not be as tech-savvy as her daughter.

But forever turned out to not be very long. Dorothy soon started tweeting from her Wii-U, saying she was looking behind her mom’s back for her phone again:

In ecstasy, she tweeted she found her Nintendo 3DS and was planning to go to a friend’s house for some secret tweeting:

Dorothy’s plight began to trend on Twitter under the hashtag #FreeDorothy. People admired her tenacious commitment to breaking the rules. Even Twitter got in on it.

Dorothy appreciated all the mutual love:

But the capper to the caper was when Dorothy tweeted from her freaking refrigerator. Yes, you can tweet from a fridge in 2019. There is no peace anywhere. 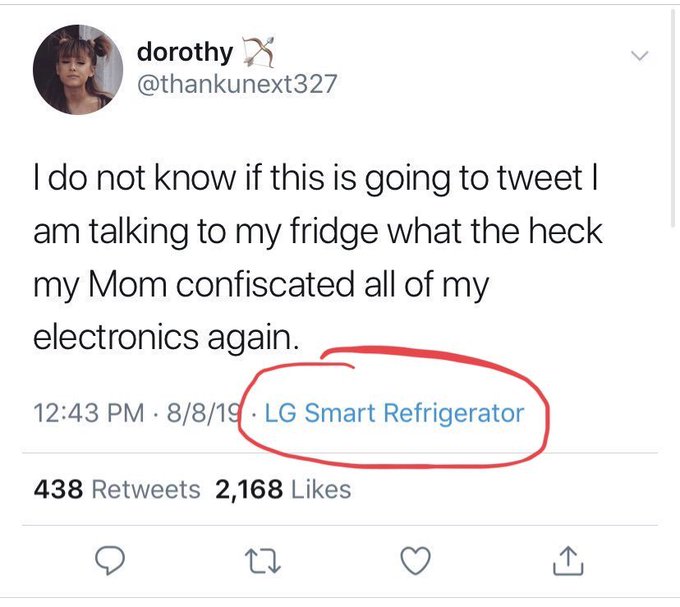 Dorothy wrote, “I do not know if this is going to tweet I am talking to my fridge what the heck my Mom confiscated all of my electronics again.”

What the heck indeed! The Dorothy tweets have now reached such a level of absurdity it’s hard to believe they’re real, but several reporters have communicated with Dorothy about the situation (on her cousin’s iPad, natch).

“She took all my tech so I’d pay more attention to my surroundings,” she told the Guardian. “I felt mortified! I was worried because I’ve been bored all summer and Twitter passes the time for me.”

And it’s passing the time for everyone else, too:

I respect Dorothy’s commitment to disobeying her parent, but it has been an inspiring run. Necessity is the mother of invention.