As with all stories from the internet, you should take this with a grain of salt.

Processing grief can take a long time, and it’s a very painful journey. When you’ve lost someone you love you need support, time, and hopefully some therapy to help get through the worst of it and then begin to heal. When people don’t get that healing time things can go very askew, like they have for the husband of Redditor u/throwaway28shd, who posted to r/AmIthe A**hole under the title, “AITA for not letting my husband name our son after his dead best friend?”

Now, it’s not uncommon for people to name kids after someone who has died, but this is not just about the name as the OP explains:

“My husband and his late best friend “Tom” (not a real name) had been friends since childhood, they were extremely close. Tom died due to a parkour accident. Tom was an amazing person, he was incredibly kind and warm-hearted and if the circumstances were different I’d absolutely want to honor him.”

She says Tom and her husband used to do parkour together, but after their marriage it fell off a bit for her husband. He feels incredibly regretful that he wasn’t with Tom in his last moments or there to call for help. He’s started doing parkour again at what the OP describes as an “obsessive” level, spending hours working on it every day and ignoring his pregnant wife. He even wants to quit his job and post parkour videos on YouTube as a full-time job. She thinks these are all huge red flags, and she’s asked him to see a grief counselor. She’s afraid he might end up dying like Tom, because he comes home with new injuries all the time.

That would all be scary enough, but it’s gotten even weirder as her pregnancy has gone on:

“He wasn’t very involved in my pregnancy for the first four months which makes sense because he was grieving but once he found out we were having a boy, he’s been incredibly enthusiastic but it feels like he’s thinking of our son as Tom’s reincarnation. It sounds crazy, but he’ll force me to eat lamb chops at least twice a week, even though I hate lamb, because it was Tom’s favorite food and he’s convinced the baby loves it. He’ll play this band I absolutely despise that him and Tom loved and put the speaker right on my belly. He’ll reminisce about his memories with Tom while talking to the baby.”

The OP says that her husband is very close to Tom’s mom, and she feels like the two of them are in on the “reincarnate Tom” train together:

“She gave us all of Tom’s childhood stuff and keeps telling me stories about Tom’s childhood but in a way that sounds like she’s expecting my baby to be Tom. I feel like I’m going crazy because I can’t tell anyone I know that I think my husband thinks our son is the reincarnation of his dead friend. My husband also keeps talking about how he’s going to teach our son parkour and they’re going to do all these stunts together and relive all the things he and Tom did, which I said no to. My husband is an adult, I ultimately have no control over his hobbies, but I don’t want my son to do something that dangerous. I’ve seen the injuries my husband have sustained and I know how Tom died. My son is not doing that.”

“We’ve been fighting for the last two weeks because no shit, he wants to name our son Tom and I finally put my foot down and I said absolutely no way. I didn’t say this to him, but I feel like I’d go absolutely fucking crazy if my husband not only treated my son like his dead friend but literally called him by his name. His mom called me and said I was a bitter woman who was jealous of a dead man. My husband said I was a bitch and I never liked Tom which is why I won’t do the bare minimum to honor him. I feel like I’m going insane.”

She also explained what happened with the lamb, which was a confusing part of the story for me. he basically spends all their grocery money on it, which means she has few alternatives: 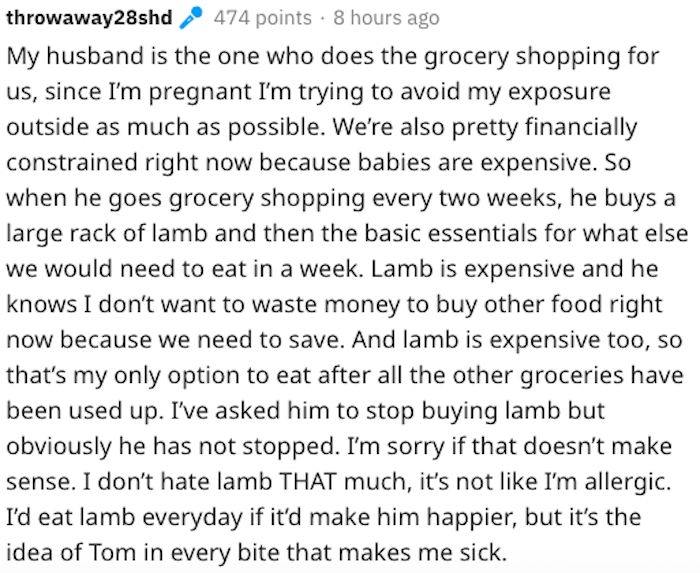 The commenters were very quick to tell the OP that she is not being crazy—she’s being put in an impossible position by someone who needs to see a therapist. Immediately: 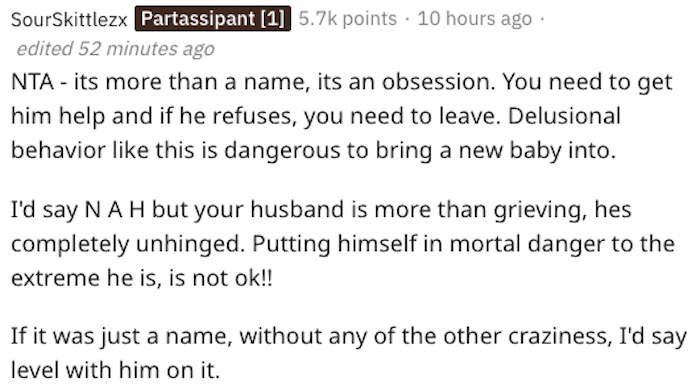 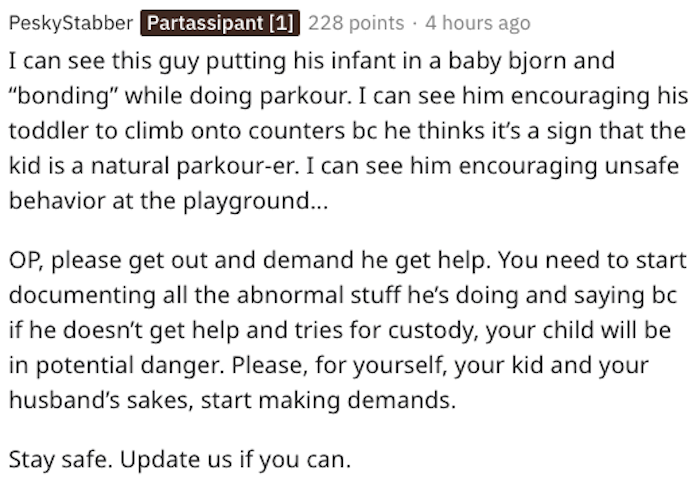 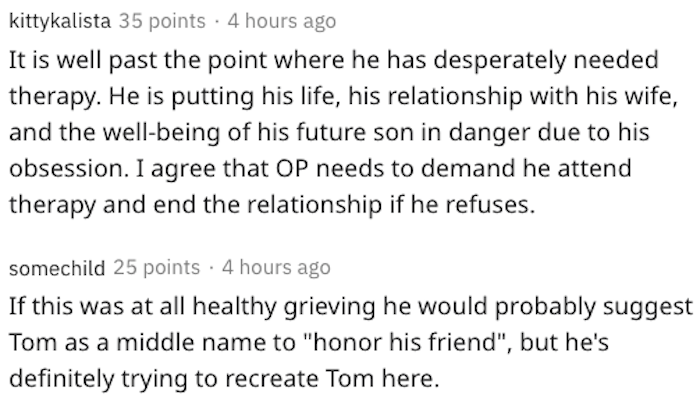 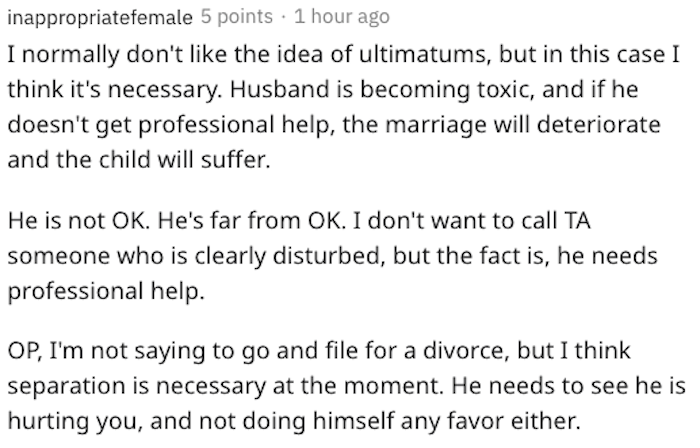 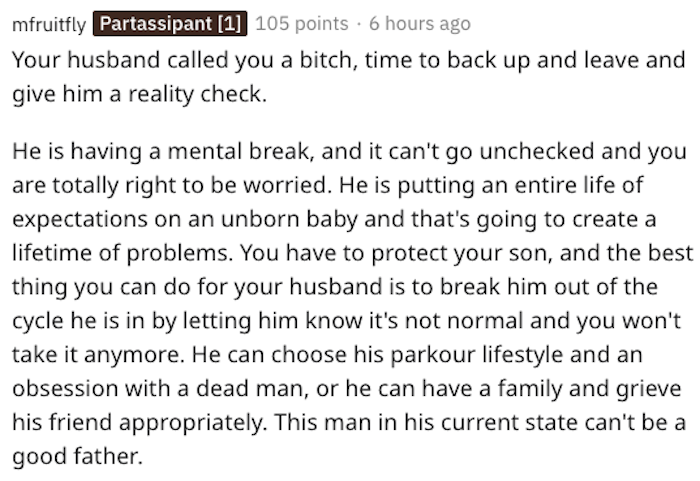 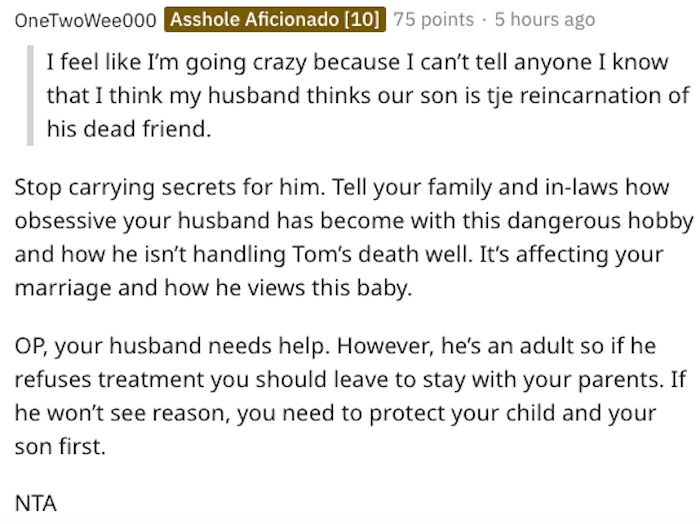 The OP should leave, because it’s not just herself who is being made miserable by this situation. it’s her own child who is being put in danger. Even if the baby’s dad doesn’t make him do toddler parkour, he is trying to make him live his life in the shadow of a dead man. That’s not healthy for any child.