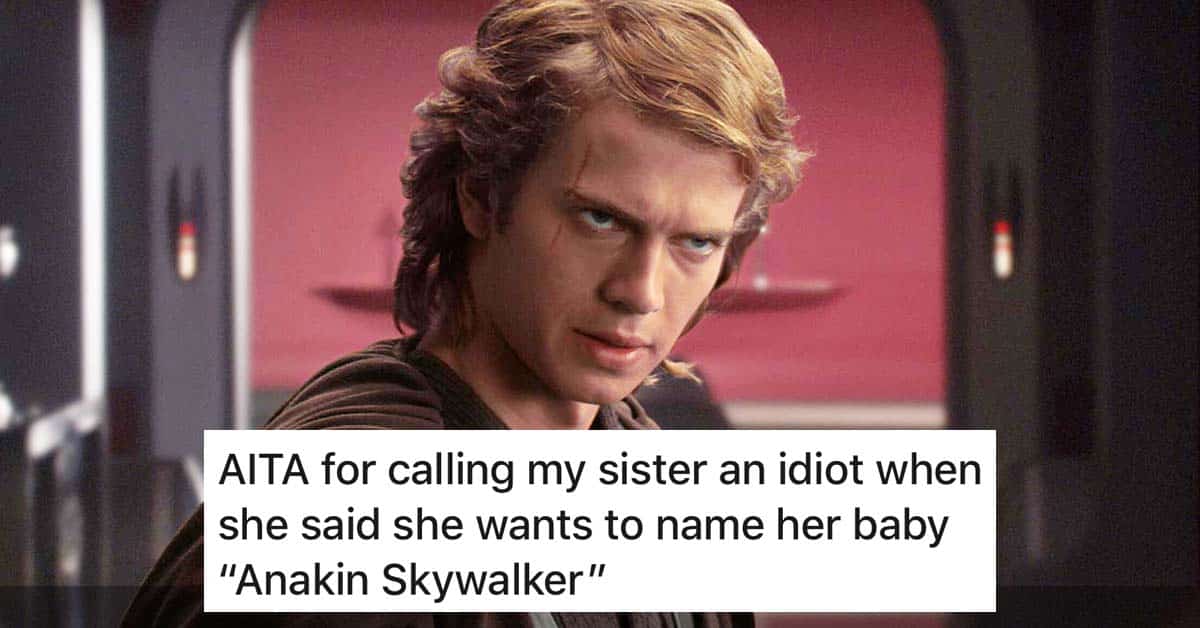 With the baby name obsessors in full force over Grimes and Elon Musk’s little bundle of joy, X Æ A-12 Musk, we bring you a similar story about a potential name that could prove problematic in the future.

On Reddit, a concerned brother posted a story about his pregnant sister’s choice of name for her baby, wondering if he is being unreasonable for encouraging her to change her mind. The name in mind? Anakin Skywalker.

“My sister is 19, four years younger than me, and she became pregnant unexpectedly with her boyfriend of only three months. She’s way too young for a kid, and that shows in a multitude of ways, but none so egregious as her name announcement,” the OP begins.

“She posted on Facebook yesterday a calligraphy banner with ‘Anakin Skywalker last name’ printed on it. I put a laugh react because obviously I thought it was a joke? But then later when I called her to ask for the real name she said ‘no, that’s exactly what we’ve decided to call him.'”

The OP asked the baby daddy about it, but he didn’t seem to care—which blew the OP’s mind.

“I said dude, you know this kid is going to be abysmally bullied, right? You’re giving him a name that is fully entrenched in pop culture. It’s not a name that he can fit to his own identity, he’s going to be known as Darth Vader his whole f*cking life.”

And apparently his sister isn’t even a big Star Wars fan.

“It’s not about Star Wars at all, just really love the name Anakin Skywalker, it has good sonics (???). I’m sure people won’t care if he’s called Anakin.”

The OP told his sister that she’s an idiot, she got mad, called her parents, and they told the OP to be gentle with his sister right now.

“I just can’t believe my nephew is going to be fully named after the most iconic villain in history,” he concluded.

What did the Redditors think? Is this brother being unreasonable about his outrage over baby Anakin Skywalker? Or is he just lookin out for his future nephew? The responses were mixed.

“It’s such a wildly strange name choice I think you’re entirely forgiven for being shocked. I know people have the right to name their kids but I think family members ought to be able to say ‘hang on’ when it’s so blatantly unsuitable and borderline dangerous for the kids future. Anakin Skywalker will be an icon for decades yet, they’ll get so much shit,” said user spiderbabyinapram.

“My dad named me Luke Skywalker, and speaking from the heart: Don’t name your kids after popular culture icons unless it’s obscure enough nobody gets the reference. Especially fullname transliterations like that. Like even if you think ‘oh well, once they get out of school they’ll be fine’- no, your name follows you everywhere,” said Kerrus, speaking from experience.

Good grief, I have a room devoted to Star Wars memorabilia and I would never even consider naming my kid Anakin freaking Skywalker.

“There is zero chance of this kid making his way through life unscarred by this ridiculous choice. At least now when the kid complains to you about it in the future you’ll be able to say you tried to prevent this travesty,” said Lessa22.

“As a name nerd, I’m afraid I have to inform you that Anakin has been used as a name on a regular basis for quite a while. it’s had an uptick in use for the last few years. In the US it’s biggest year was 2017, when there were 321 male children named that. In 2018 there were 265. It’s definitely a ‘my parents are Star Wars nerds’ billboard, but these days people are literally just shoving popular syllables together to create “unique” names and an Anakin isn’t going to stand out that much next to little Braxton and his sister Hevynleigh,” noted user Hypatia85. “OP, your sister’s kid will be just fine. You are not an asshole for hating the name, but you will be if you keep harping on it. I have ten thousand opinions on practically everyone’s baby names, but much like my asshole unless asked, I don’t show them. You have expressed your distaste for it, but pushing it will make you the asshole. NAH, yet.”

“I know a guy named Anakin actually, and he’s in his 20s. I think it’s a pretty cool name and he doesn’t mind it. It’s not been dangerous for him, lol. Middle names don’t even matter cause 90% of people probably won’t ever have a reason to know someones middle name. YTA. It’s not a big deal,” said Fingerstripes512.

“I named my daughter Arwen and people who know where it’s from think it’s awesome and people who don’t think it’s cute. I was talking to someone in my neighborhood about my daughters name and he was saying “Oh it’s sound like and old English name, where did you get it?” And when I told him Lord of the Rings he thought it was awesome,” explained devaly93.