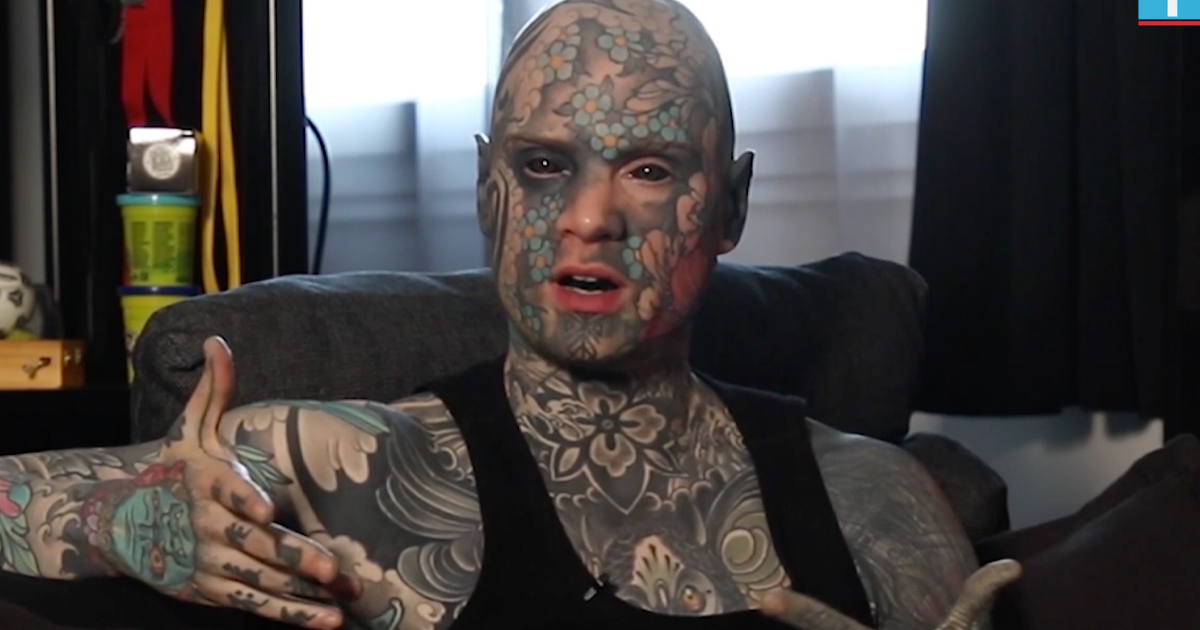 Tattoo discrimination is real. Recently we ran a story on a bride who demanded one of her guests cover up her tattoos for the wedding, and, um, it did not go over well with internet commenters.

Bride Asks Guest To Cover Her Tattoos And Dye Her Hair So She Doesn’t Ruin The Wedding, So The Guest Dragged Her Online

But beyond personal issues with tattoos, being discriminated in the workplace because of them is a problem.

So happens if your child’s Kindergarten teacher turned up with full head-t0-toe tattoos?

Teacher Sylvain Helaine, 35, has tattoos all over his body, including his face and tongue. The whites of his eyes were also surgically turned black. Helaine, who loves teaching, says that he was prevented from teaching at a French kindergarten after a parent complained that he scared their child.

call me an idealist, but i think it’s possible for society to draw a line between destigmatizing tattoos in the workplace and recognizing if you look like something straight out of pan’s labyrinth you’re going to make the five year olds cry https://t.co/eicUyy4UkX

Helaine, who teaches students from age six and up, said that after the initial shock, students tend to not care about his appearance.

“All of my students and their parents were always cool with me because basically, they knew me,” said Helaine.

Helaine explained that while he was teaching kindergarten at the Docteur Morere Elementary School in a suburb of Paris, parents of a three-year-old complained to the educational authorities. The parents said that their son, who was not taught by Helaine, had nightmares about the tattooed teacher. Eventually, the authorities told Helaine he would no longer be able to teach kindergarteners.

Societal judgement is terrible on anyone who doesn’t fit the “normal” image. Hopefully, there will be schools who see him for who he is. Face tattoos come with so much stigma. He is so young.

Tats aren’t that big of a deal in Modern Society; pretty sure I had Teachers who didn’t cover their Tats when I graduated high school in 2011.

Okay I have a half sleeve and back tattoos as well as the back of my neck is tattooed but my 5 year old would freak tf out if she saw her teacher like this.

Too bad, but he’d be a Rock Star Barista at Starbucks.

Helaine thinks “the decision they took was quite sad.”

Despite the setbacks, Helaine said he would stick with his chosen career. “I’m a primary school teacher…I love my job.”

“Getting tattoos his my passion,” he added. He hopes that he can help students accept those who look different than the norm.