Tattoos are very personal, and people have different tastes. Someone’s Mickey Mouse in a meat grinder might be another person’s butterfly. But, tattoo artists of the world: have you ever given someone a tattoo (or refused) because you thought it was too WTF? Like, you deeply felt this person would regret their choice and put your foot down?

On Reddit, tattoo artists (and of course people who know tattoo artists—it is Reddit, after all), are spilling the beans about the most outrageous tattoos they’ve ever drawn—and I never realized so many people want bizarre stuff on their junk.

“Woman came in wanting Where’s Waldo peaking out of her vagina. He told her to go home, sleep on it, and come back the next day if she really wanted it. She was there when the shop opened.” — tornligament

“Had a client ask to make his nipple into Pinocchio’s face, it was weird but he was happy and we had a good laugh.” — flashthefastguy

“Several years ago I tattooed the words ‘Jeffrey Dahmer’ in sh—ty scratchy writing on a girl’s neck for her 18th birthday. She had been coming into the shop a lot with her friends as they got tattooed and talking about it. She had the letters drawn up exactly as she wanted them and everything. The answer was always the same. “No f–king way.” When she finally turned 18 she came in with a few friends and asked again. I told her politely to f–k off with her shenanigans. A few minutes later her friend told her he could just tattoo it with the “gun” he got off eBay at home. I made the hard choice to do the tattoo to ensure that it wouldn’t get infected or be all scarred up if she ever decided to have it removed. It’s been circulating around the internet for several years. I still feel sh—ty about it, and hope she got it removed.” — professorlowcash 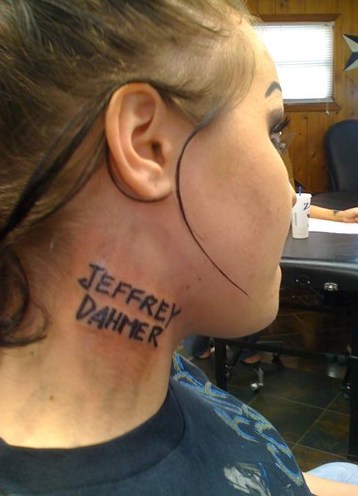 “One that really stands out to me is that a guy came in wanting a Pin-up of his wife tattooed on his thigh, Okay, not something I would get but it common and understandable, Client tells the artist he wants her in The “Stay puff” costume from Ghostbusters, so the artist took this as like her in a sailors uniform, So he draws up a few different ones and shows the client who tells him, ‘No No man, like THIS,’ and retrieves a drawing out of his pocket that is his girlfriend made to look like the Michelin Man and the Stay Puff man were her biological parents. she had a triple chin and everything. So the artist goes, ‘Your body your choice man.’ And while he’s getting tattooed his wife shows up and yeah she was for sure Thicc but nothing like what the drawing depicted and everytime she looked at the work in progress I could see the mixture of embarrassment and frustration across her face. Never saw them again but heard a few weeks later they got a divorce. Wonder what he did with that ‘Stay Puff’ tattoo.” — Something_Obnoxious

“My tattoo artist said a guy tried to win his possible father-in-law by tattooing the name of his business. Of course he and the girl broke up later on.” — FlaxSeedBP

“A guy got ‘don’t hire’ tattooed across his knuckles.” — f1_77Bottasftw

“I was in a tattoo shop with a friend, there for moral support while they got their first. Well, we’re waiting in the lounge area for my friend’s appointment, and this guy walks out from the back area, shirtless. Across his chest in digital-clock font is ‘best lover’ one word on each pec. my friend and i’s jaws dropped. the guy just paid the person at the front desk and left. The tattoo artist who followed him out sighed loudly and just kind of laid his head down on the counter before calling for his next appointment.” — lillipeetle

“A guy came in a year ago and wanted pickle Rick on his dick. Not small like the whole thing green with the face. She didn’t do it but he got it done at someone’s home and came in like 6 months ago to ask her if she wanted to see.” — liltittybigcitybitch

“A guy with the word “BEER” written in massive fiery block letters across his lower back, tramp stamp style.” — benofthejungle

“One of the other artists, for some reason had been wanting to tattoo a bloody tampon on someone. Well, this lounge lizard was like, ‘you can do it on me.’ Ths artist drew it on to where it took up the entirety of his inner upper arm. He did it. The guy let him.” — PolydeucesAreWild