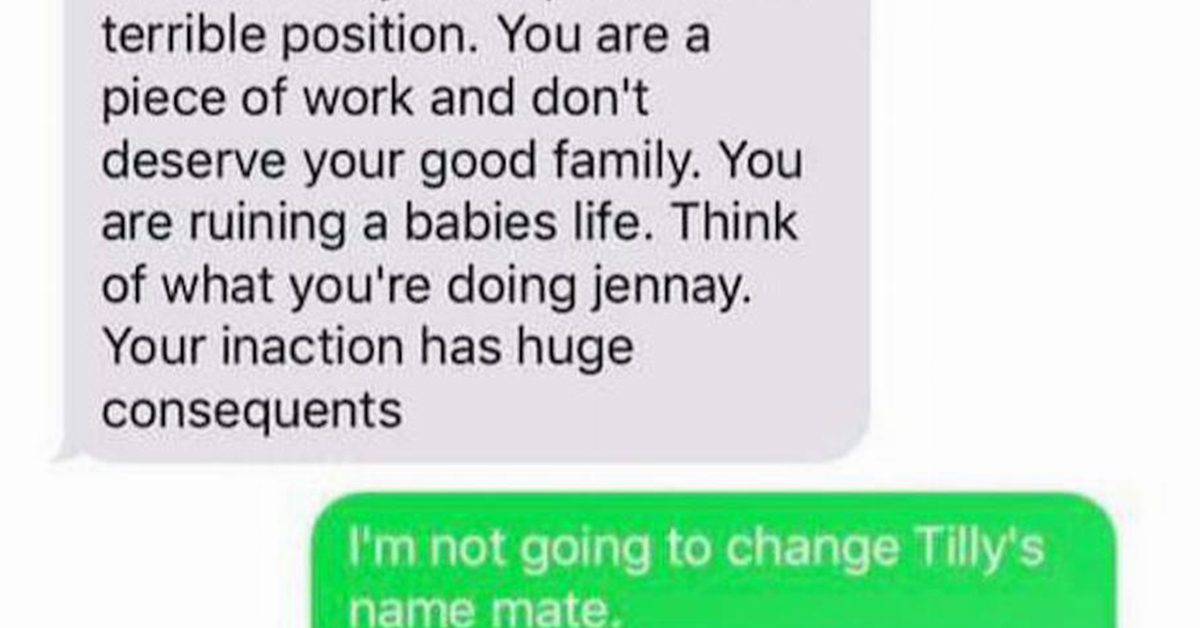 Being pregnant is not without its annoyances, like back pain and morning sickness. But one mom-to-be found another reason to be annoyed, and it has nothing to do with nausea.

This mom is upset because an acquaintance has a dog with the same name she’d picked out for the baby, and she is not having it.

A Facebook conversation by a woman named Jennay was widely shared on Reddit, in which a hapless dog owner describes the strange message from the expectant mother, who we’ll call Mom TB.

She initially writes to tell Jennay (who we’ll call Dog Mom) that she’s pregnant, and Dog Mom is happy for her, if a little confused about the news, because apparently they “don’t really know each other.” Dog Mom says congratulations, but Mom TB has a real reason for the message.

“It has come to my attention that your dog’s name is Tilly,” writes Mom TB, and explains that she wants to name the baby Tillie. “Obviously you understand that my daughter can’t have the same name as a dog.”

After all, a human having the same name as a friend’s pet who you aren’t even close to would be terrible, just awful, truly a tragedy for the ages. Could you imagine the trauma that would wreck on an innocent infant?

Dog Mom puts up a valiant fight against Mom TB, explaining that she “doesn’t think it’s necessary I doubt you’ll see my Tilly and I don’t think anyone will notice.” At this point, Mom TB gets in her feelings and goes off.

She tells Dog Mom “since I don’t have kids I don’t understand,” and not changing her dog’s name would lead to “potentially ruining her unborn daughter’s life.”

Yes, that’s right, Tillie the baby could deal with years of bullying and trauma, all because Dog Mom wouldn’t change Tilly the dog’s name. The dog, by the way, came first. The tragedy of it all. Scroll down for the receipts.