There’s often a lot of drama after a breakup. Few people manage to have a clean separation, especially if they were married or lived together.

This is a story about a woman trying to track her ex-husband down after he stole her crockpot. What she found was so much more. Writer and editor Elamin Abdelmahmoud posted a screenshot of a wrong number text he got from a woman named Suzanne looking for a man named Tom.

There wasn’t that much info in the message, but Abdelmahmoud knew he was on Suzanne’s side from the jump.

“Hey Tom it’s me, Suzanne I want my Crockpot back you Bitch,” she wrote, very poetically.

Good morning to everyone except for Tom pic.twitter.com/DFoqCRSMGq

Abdelmahmoud had to know more. he told Suzanne that she had the wrong number for Tom, and got perhaps more than he expected in response.

(Scroll down for screenshots of full conversation)

Team Suzanne till I DIE pic.twitter.com/j3uxy2IUDK

Tom is Suzanne’s ex-husband, and not only did he take her Crockpot, but he also stole her casserole dish. She claims he stole her stuff all the time and even uninstalled the toilet so she “can’t sh*t anymore.”

I really don’t know how she is even thinking about that casserole dish when there’s no functioning toilet in the house, but everyone has their priorities, I guess! 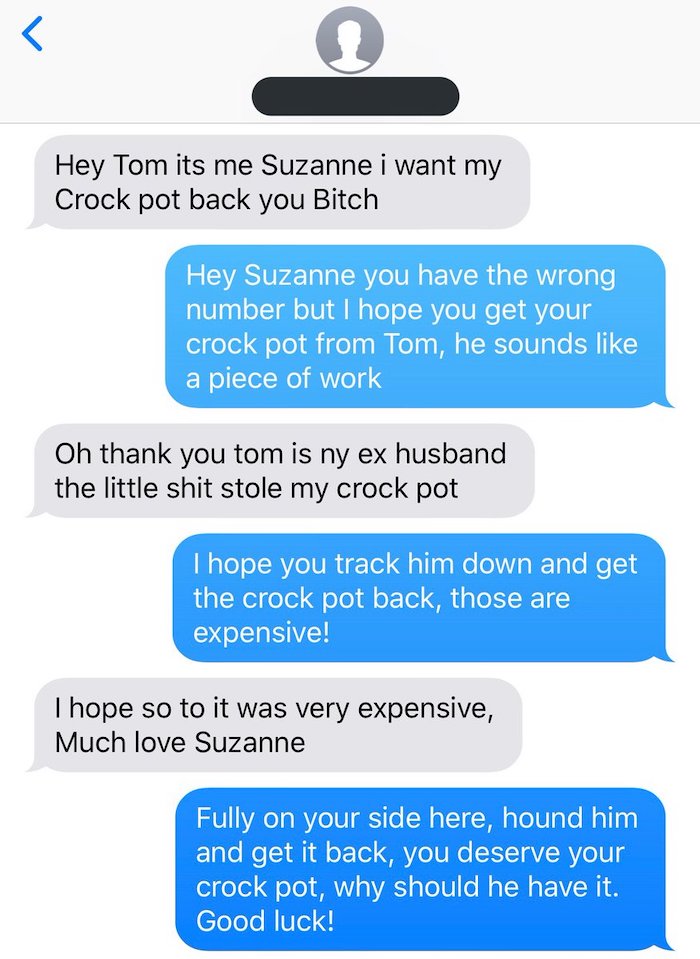 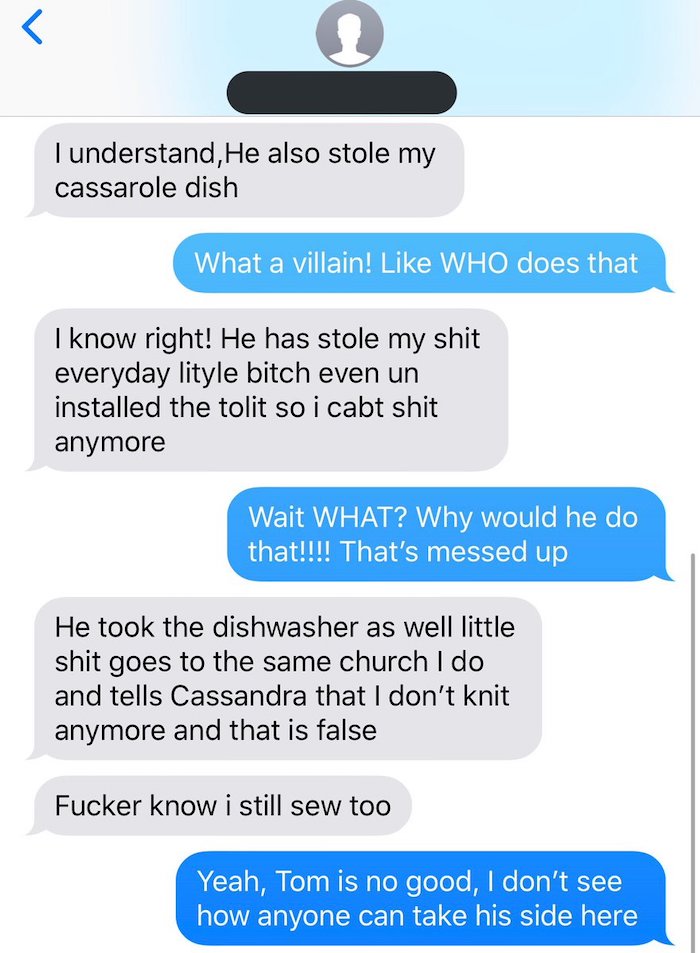 No matter what Suzanne said, Abdelmahmoud hit her with something supportive and uplifting.

Isn’t that what everyone needs when they’re going through a breakup? Tom even took her dishwasher and is spreading lies to Cassandra about how Suzanne doesn’t knit anymore. But she DOES and she SEWS. Can you believe this Tom guy?

Pretty much everyone who has read these texts is Team Suzanne:

ladies, if he:
• steals your crockpot
• uninstalls your toilet
• takes your casserole dish
• tells Cassandra you don’t knit anymore when it is false,

Look I tried to get into it

Sees straight through it.

Who uninstalls a toilet!?

Yeah, I cannot get over the toilet thing.

She really buried the lede there.

If I find Tom, he’s gonna have a lot to answer for. But it will be much worse for him if he meets Suzanne—she has a set of knitting needles and she knows how to use them.