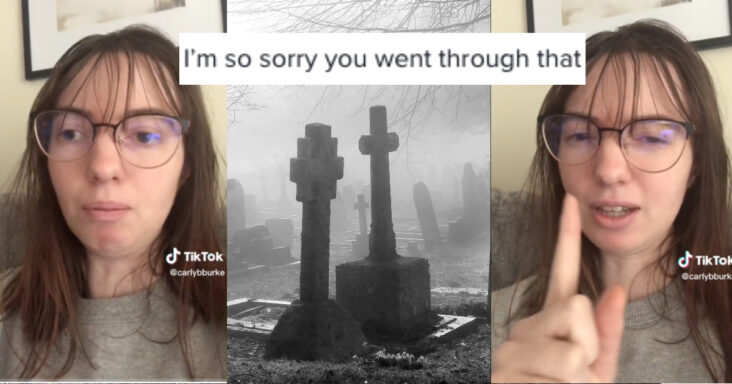 Everyone has weird breakup stories. But this one from TikToker Carly Burke (@carlybburke) takes the cake.

It started out normally enough. Burke met a guy online and they started dating. She was charmed by his spot-on impressions of Eric Cartman from South Park.

To protect his identity, she referred to him as “Bob” in the video. But something weird started happening: Bob kept referring to her as “Jessica.” And weirdly, so did his entire family.

At one point, his grandparents even asked her, “Can we just call you ‘Jessica?’ That would be easier at this point.”

She said, “I had to awkwardly be like, ‘No, I will not respond to that, because that’s not my name.'”

Burke became convinced that Bob was cheating on her. Oh and to thicken the plot, he also had a locket with a picture inside, but he wouldn’t let her see it.

Finally, she snuck a peek.

And there WAS another girl’s picture inside. Who looked exactly like her. Her name was Jessica, and she was deceased.

As Burke explained, “He had a dead ex-girlfriend named Jessica that looked just like me… he just started dating me to cope with the fact that she was dead.”

She shared other weird stories from the relationship. He’d occasionally tell Burke he got her flowers, and then put them on Jessica’s grave instead.

Eventually, Burke broke up with him because it was too much. And then the dude stabbed himself in his grief.

Needless to say, the commenters were floored by this video, which has more than 9 million views.

In a follow-up video, she clarified a few things.

When the dude stabbed himself, she said, it was over a Zoom call (that’s when she broke up with him).

He was fine, though, and even tried to stitch himself up (“I was in Cub Scouts,” he explained). Oh and then he pretended to join the military to try and make her feel bad, so she’d get back with him.

For the next several months, he kept calling her and acting like they were still together.

As for the girlfriend, the original Jessica? She apparently died in a car crash after not wearing a seatbelt.

Needless to say, everyone was horrified by this story.

We’re not sure what to make out of all this. Maybe be wary of people who insist on calling you by another name. Anyway, here’s the video and the follow-up.