There are certain things cisgender men will never understand, no matter how long they go to school for. One of those things is having a female body.

Some doctors didn’t get the memo, however. Actually, a lot of doctors. Bias related to pain and treatment is a big issue in the medical field, with women — especially women of color — being mistreated or undertreated because they are not believed.

Over on TikTok, women are exposing the horrible things their male doctors have said to them.

The chain was kicked off by TikTok user heythere_delylah.

Her experience involves an ER trip for rectal bleeding. The doctor asked if she was on her period — which does not flow from the butthole.

Her video kicked off a string of women who shared their own male doctor horror stories.

This woman’s doctor tried to convince her he was much taller than he really is. And when she looked down at his shoes, she saw he had on heels specifically made for men.

I have been WAITING for this one lmao!! @heythere_delylah #fyp #fragilemasculinity

This person went in for a standard physical. Being the first time she had seen a doctor in a while, she opened up about some mental health struggles, hoping to find help. He dismissed it and at the end of the physical, he closed the door, had her sit on the table and then rubbed her feet. And that was the visit.

When this person was 18, they were trying birth control and ended up having bad side effects. They told their doctor the side effects were too much to handle and they preferred an IUD instead. The doctor said “I’m not going to give you an IUD because you can end up sterile and your future husband might want kids.”

Even more people added their experiences in the comments. 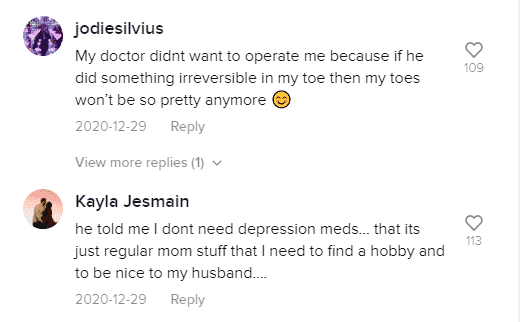 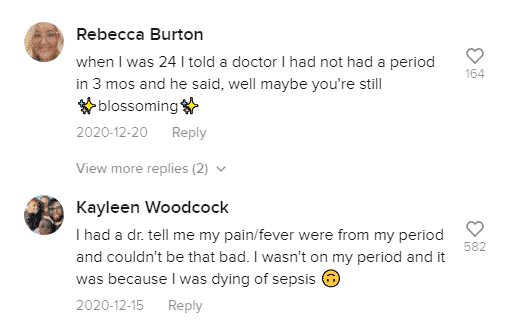 But for real—do bros just blame everything on menstruation when they don’t know the answer?