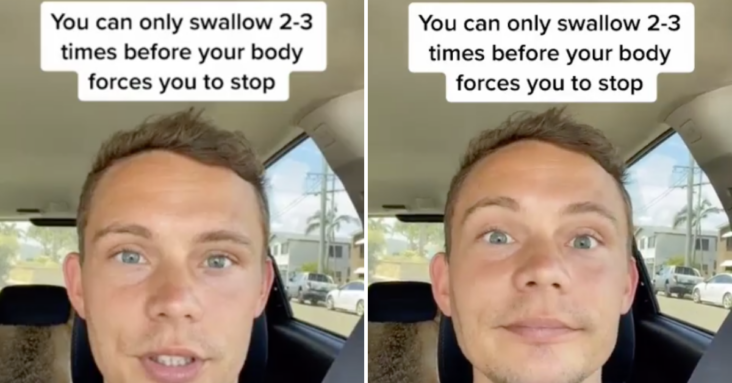 Oh, humanity. Always reaching for the stars, experimenting nobly to further our understanding of science and the limits of the human body.

I guess that goes for TikTokers, too.

One TikToker recently posted a video in which he tests the theory that you can only swallow two to three times consecutively before your body forces you to stop.

Apparently, a lot of folks are interested in this, and the video has a ton of hits.

On his channel, Jesse Beharrell demonstrated the theory and also urged others to test it out: “You can only swallow two to three times before your body forces you to stop. Go on, try it, let me know how many times you can do it.”

Some folks commented that they were able to do it as much as seven times with feelings of discomfort.

“7 and I almost saw my grandma,” one follower said.

What’s up with swallowing? There are two kinds: wet and dry.

To swallow, 22 of your throat muscles contract to force the contents down, which is called the peristaltic sequence.

If you’re swallowing nothing, it becomes difficult because there’s nothing to push down.

Also, when we swallow, we momentarily stop breathing.

So, how about don’t try this at home?