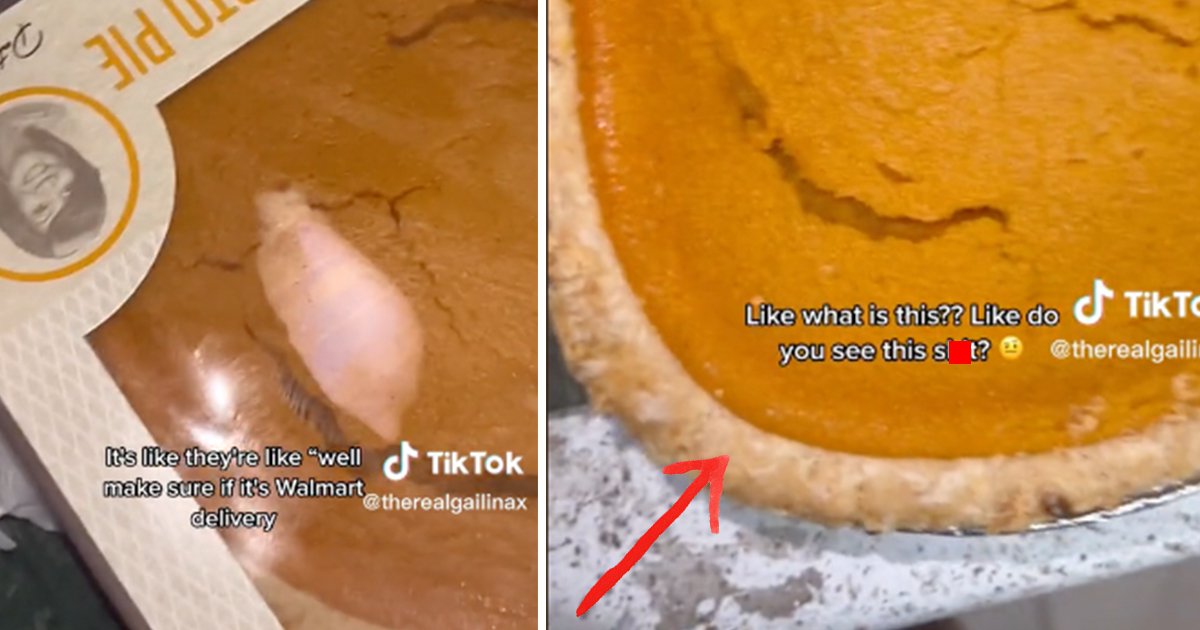 Food delivery and curbside pick-up have been all the rage since the start of the COVID-19 pandemic back in 2020.

The convenience of being able to pull up to a store like Walmart or Target and scoop up your prepaid and already bagged groceries, rather than spending time walking around a store, is hard to beat.

However, it’s obvious that the curbside and delivery systems have come with a few issues as well. Horror stories of bad Instacart shoppers and rotten produce, among other tales, have cast a tainted light on food services such as these.

One TikToker and Walmart customer Gailina (therealgailinax), put the company on blast after noticing a trend of bad food items being included with her delivery orders. According to the user, this wasn’t the first time Wally World had messed up and sent her the “worst items”. In her video, she expressed her grievances about a deformed pumpkin pie.

“Here’s my problem with Walmart delivery,” she says behind the camera as she shows an uneven and split pumpkin pie protruding from her Walmart bag. “They always give you the worst sh*t.”

Throughout her clip, Gailina’s commentary on the pie progressively became more and more frustrated: “It never fails. They always give you…It’s like it’s a rule book. It’s, like, they’re like ‘Well make sure if it’s Walmart delivery you make sure you give them the absolute worst sh*t!'” She says as she unpacks the mutilated pastry.

By no means did the pie look inedible, it simply wasn’t that aesthetically pleasing. Later in her comment section, however, Gailina noted that the pie “tasted a lil sour” but that it didn’t smell bad so she ate it anyway. To this, one commenter (cokioutcherri) responded with what we’re all thinking: “Oh lord.”

“This sh*t is beat the f*ck up!” But, ultimately her feud with the pie wasn’t quite serious enough to keep her from eating it. At the end of her video, she confirmed she would be “f*cking it up” regardless.

Gailina’s TikTok video of her laments towards Walmart’s delivery services giving her the “worst items” ensued other confessions from Walmart customers.

Viewers shared their own personal grievances with Walmart‘s food delivery system. Many came forward about rotten and spoiled food they had received through the company. Others commented on the state of the pie, noting that it truly wasn’t “that serious.”

Perhaps the most intriguing comment of them all was from an alleged Walmart employee in the flesh who outright said workers are told to pick out the items no one in the store would choose when ordered through delivery!

Although this method probably does contribute slightly to less food waste, all customers should be treated with equality, especially when they’re paying extra to have their groceries hand-picked and delivered. As Gailina said in her caption, “Walmart do better.”

Below are some other personal stories of Walmart delivery messing an order up: