Twitter has once again produced a meaningless debate that will make your question your own sense of reality, like the infamous black/gold Dress and the Yanni and Laurel test. Like many of these strange illusions, there is an explanation. First, you should try it yourself. 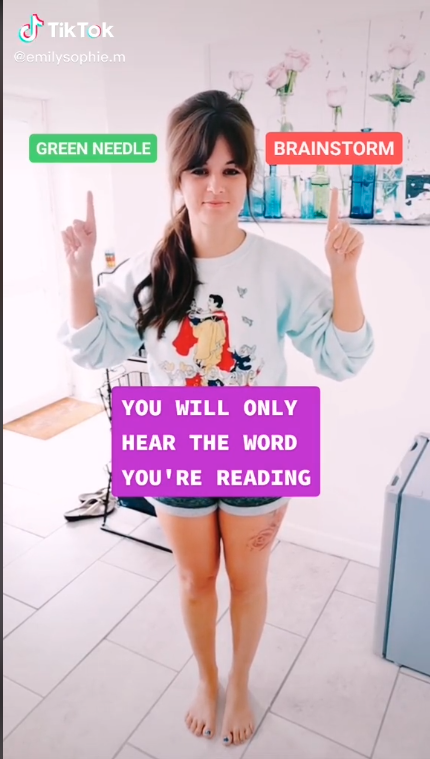 The TikTok created by @emilysophie.m was posted to Twitter by @AlexShawESPN, where it went doubly viral. In the video, an audio clip plays. On the screen there are two words, “green needle” and “brainstorm.” For most people what they hear in the audio depends on what word they’re looking at on-screen. It’s very weird and it totally works on me:

This is crazy. How? pic.twitter.com/r2Ylpf9a2x

Lots of people were very disturbed by this witchery. If your perception of reality can be so different from one replay to the next, what else are we constantly misinterpreting?

This is too weird.
I’m going back to bed.
pic.twitter.com/Nq8498vseF

It also works if you close your eyes and just think of the one you want to hear. https://t.co/qqVSgr6KBd

What is this fuckery https://t.co/hK6JkkZJmz

Eventually, someone came along to explain that this effect has a name:

I came here to explain this

This is an advanced variation

The McGurk effect is a perceptual phenomenon that demonstrates an interaction between hearing and vision in speech perception. The illusion occurs when the auditory component of one sound is paired with the visual component of another sound, leading to the perception of a third sound. The visual information a person gets from seeing a person speak changes the way they hear the sound.’

So, both sounds are playing in this clip and your mind fills in the confusion with the clarifying information of the word. In a way, we “hear” with sense besides our ears, like visual context or theoretically even other types of senses. They all kind of work together.

Use headphones and you’ll hear both words said at the same time. Green Needle is high-pitched and Brainstorm is low-pitched. Add very poor quality audio to the mix and your brain will fill in the blanks and let you hear what you expected to hear.

an EQ trick Si, the thing is actually saying brainstorm but the high frequencies make it also sound as though it’s saying green needle

And even weirder, it doesn’t work for everyone, either because they have different hearing abilities or their brains work differently than for the people it does work:

Not for me. I can only hear “Brainstorm”

What a mystery the mind is. Thank you, TikTok for pointing that out yet again.

More of the best viral TikToks: