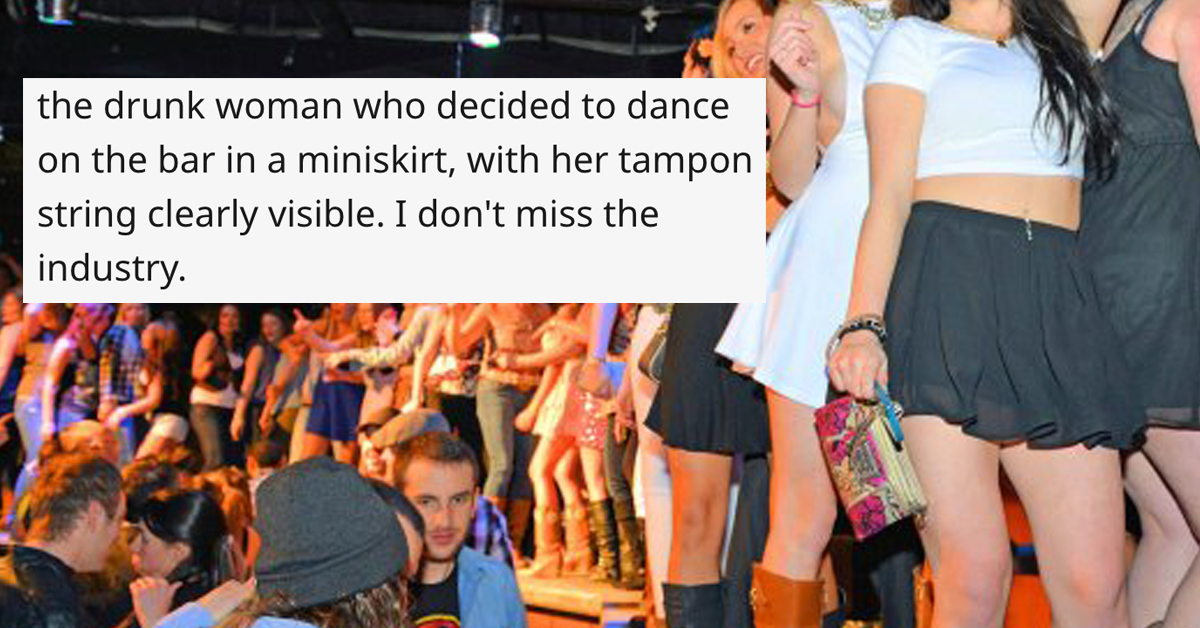 Bartenders, the ultimate host of the ever-lasting party.

A good bartender has to be a sort of jack of all trades, especially nowadays. You’ve got to have the gift of the sympathetic ear, the memory of an elephant, the patience of a mother of 100, the personality of a game show host, and the hand-eye coordination of a professional juggler.

The bar is where regular people go to escape their worries by letting loose, but it’s truly baffling how many people, even the barflies, lack proper bar etiquette. 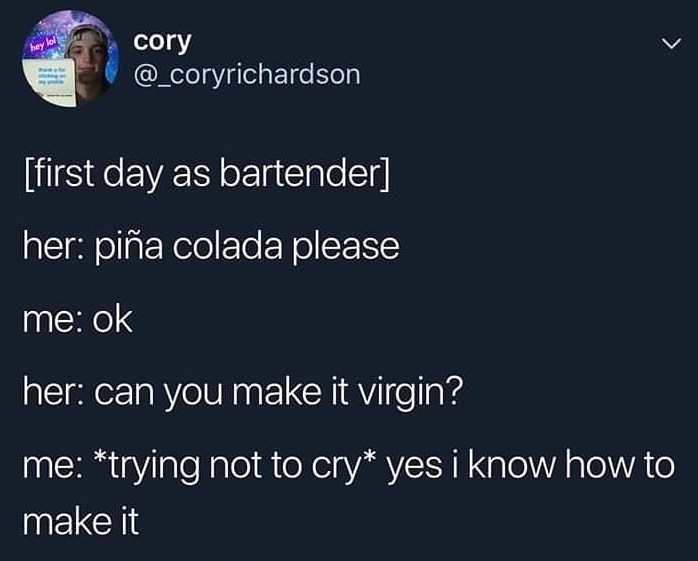 You’d think it would be common sense to not act like a d**k when you have to wait a minute for another drink or get cut off because you’ve drunk yourself sloppy but — without fail — bartenders have to deal with drunken jerks almost every single shift.

But bartending definitely has its upsides.

It’s fun to be in charge of a bunch of people having a good time. Providing the elixir of fun makes you the most popular person in the room and there’s nothing more satisfying than 86ing a prick whose face you’ve wanted to punch ever since it appeared in front of you.

One of the best perks of the trade is the endless amount of interesting stories that you tend to collect over the years.

Redditor u/MillieAnimeCrystal asked the bartenders of Reddit: “What’s the strangest thing you’ve seen someone do while intoxicated?”

1. A physicist walks into a bar…

“I once had this drunken physicist derive the whole standard model with whiteboard markers on my windows.

It was amazing, I named a drink after him” –HuiOdy

“One time a dude puked in his hands in the men’s room, and then for whatever diabolical reason, decided to fling it onto the ceiling.” –apriloneil

3. Aluminum is part of a balanced diet, right?

“I watched a patron eat a white claw (hard seltzer.)

Eat. As in take the full can, turn it sideways and proceed to chew it open and gnaw on the aluminum.” –ccajunryder

“Had a guy decide the bathroom line was too long and pee directly onto the bar, thinking we wouldn’t catch him.” –qwertyzeke

“I was a DJ and bartender a few years back at a nightclub. While DJing, someone pulled a tampon out of themselves ON A BLACKLIGHT DANCE FLOOR and threw it onto the ground about 20′ away from me. Proceeded to attempt some drunken sex on the dance floor with her guy before security escorted them out. Literally everyone in the club saw it when we turned on the lights for them to clean up the blood on the dance floor (pun intended).” –tobraham

6. Never waste good booze, even if there’s puke in it.

Back in 2009 at a billiards bar in Seattle….homie was taking a Washington apple shot with a group of friends, he violently chugs it down, pukes it back up into the glass (with some bonus stomach contents), looks around to see if anyone noticed, then promptly chugs the glass of upchuck as to not be discovered. I said mutherf—ker, you nasty, and I’ll never forget you sweet prince.” –drowsr365

“In a busy bar, guy in the men’s room grabs the urinal puck out of the pisser, puts it into his mouth and says, “This doesn’t taste like mint!”. –PuckDad

“I was a bartender a few years ago in Wyoming and one weekend night, a couple party bros came in and wanted tequila shots, but they wanted it the upside down divot of a shot glass, so they could use it to snort the tequila. I laughed and had to ask several times if I heard them correctly. Informed them I would have to charge a full shot even though they’re getting barely a few drops. They didn’t care, paid around $6-7 per shot and snorted tequila at the bar. Got all riled up, tipped well, and wandered off into the night. I’ll never understand why or what that did for them.” –mmmjordaaaan

9. Don’t we all need some oral though?

Closing one night, I went to do a spot check in the woman’s restroom to find a woman who’d disappeared (actually an acquaintance of a coworker.) She decided I needed oral sex and managed to get some headway in within the minute or whatever it took to put a stop to it.” –Uniquenameofuser1

“I was a barmaid for a while in my teens and this guy enters the bar pretty late and approached me(he didn’t seem drunk or intoxicated) he said along the lines of excuse me I’m sorry to bother you this might sound weird but I sometimes have visions and i had a vision of you (i won’t go into detail here) and then he said and I was just worried and wanted to know if you were alright etc I was pretty shocked as he had no way of knowing this and he seemed genuinely concerned. I had never seen him before and never seen him again after that night it was a bit surreal.” –follower888

“Had a guy that got quite annoyed when we cut him off for being too drunk and disorderly, so I assume as a way to say f–k you to us, he took a massive dump in the urinal.” –lonelyhoncho

“I used to volunteer at a bar owned by a non-profit (was a weird thing that was grandfathered in and no longer legal in this state to get a permit for a new one), and this one guy used to stack up quarters in piles of three. We were next door to a tiny laundromat that didn’t have a change machine, and he traded three quarters for a dollar bill. On busy laundry nights, he was able to pay for half of his beer. We later got a couple of arcade games and a nice pinball that took quarters, and he made even more profit. Err, I mean he drank more.” –airfryerbroccoli

“I saw a guy punch a 6×6 ceiling column and shatter his hand trying to peacock the guy he was try to fight… short fight… why would you hit a solid 6×6 timber?” –jolllyroger027

“An industry friend used to tell the story of the drunk woman who decided to dance on the bar in a miniskirt, with her tampon string clearly visible. I don’t miss the industry.” –Uniquenameofuser1

15. Tell me more about your succulents.

“I know many strange stories and had a few on my own but the strangest occasion was when I was not bartending, but in the bar I work at. I also typically do the decorations there and we had just gotten new succulents in pots.

A girl i know well enough came up and ask me if the succulents are poisonous. Now I hadn’t gotten them, but was informed that they are not to eat but only stomach upsetting and relayed this information.

She was very relieved and than told me her male friend had bitten one to see what it tastes like. They apparently faintly taste like banana…” –deterministic_lynx