If you have any access to social media whatsoever, you now that sourdough starters and crusty loaves are the new quarantine pastime. That makes perfect sense to me: baking bread takes time, which many people have too much of right now, and we all want to eat carbs all day long. The fad has lead to a shortage of yeast and in some places, it’s hard to get your hands on flour. But it’s not dire. I saw some on my grocery shelf yesterday, for real!

A woman named Caren White is taking this situation extremely personally. She published a whole Medium article about why she’s the only one who deserves to bake bread during this unprecedented time, which she has since deleted, because her ass got dragged across the wheat field.

It didn’t help that her name is Caren White. Karens are the iconic white women who want everything their way or the highway and won’t hesitate to call the manager on you if they don’t get it. Her article about why everyone baking is stealing food from her family’s mouth should go in a museum dedicated to historical moments of entitlement.

Her story begins with her walking down the baking aisle looking for organic flour. White claims that she is poor, so she always looks for organic flour when it’s on sale in bulk. Finances are relative, but in my experience, most really poor people can’t afford to stock up on supplies. Anyway, she was disappointed.

“There was no sale and no flour. The shelves were bare. My eyes traveled up to the top shelf. The shelf with the leavening ingredients. Also bare. How could this be?” she wrote. 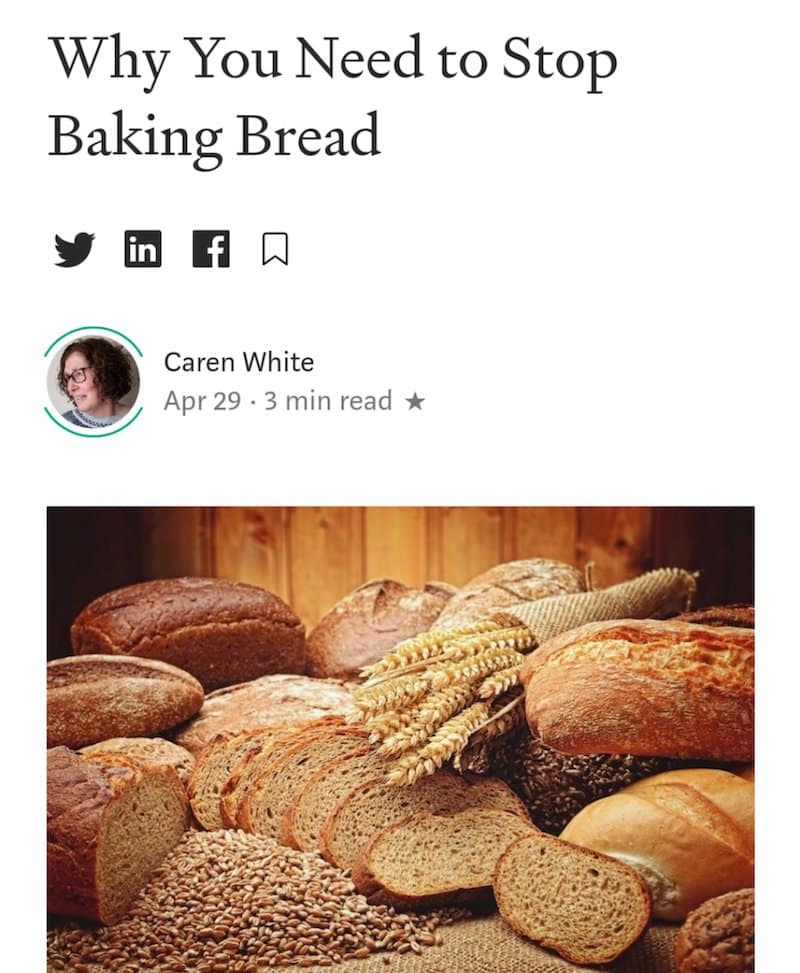 Caren discovered what everyone else knew when she got home and actually started reading about the pandemic again. She says she had kinda checked out, which must be nice. There she discovered that people are baking bread because they’re bored. Which to be fair, is true. Caren has nothing but contempt for this dilettantes:

Seriously? Baking bread is a way of life for me, not a hobby. Not something to do just to pass the time. I don’t eat store-bought bread. I rarely eat prepared foods of any kind. If you visited my kitchen, you would find food but nothing to eat because I only stock ingredients. I do all of my own cooking and baking. On Saturday nights, I don’t order pizza, I make it. From scratch. Including the crust. I also grow my own popcorn, but that’s a topic for another day. You see, I am one of THOSE people. You know the ones. You offer them a plate of food and they look at it suspiciously asking “Is that organic?” I want to know what is in my food so I make it myself. By the way, croutons? Made from my homemade bread. Breading for fried chicken? Made from my homemade bread. Stuffing for the Thanksgiving turkey? Made from my homemade bread.

Oh, one of those people. You mean jerks? What Caren is describing isn’t being poor and having no food, it’s being a snob about store-bought bread or food that doesn’t pass her sniff test.

So when you buy up all of the flour and leavening ingredients for the sake of pretty photos on your Instagram feed you are literally taking food from my mouth. And the mouths of other families who also do their own their baking so that they can provide healthy food for their families.

Then Caren explains that the pressures of supply and demand are ruining her bread-baking needs, which are more important than anyone else’s. Now she can’t get that organic flour because she’s competing with bakers “who care nothing for anyone but themselves.”

Yes, I know that sounds harsh, but I’m willing to bet that not a single one of them stopped to think as they grabbed the last of the flour and the yeast that they were robbing other people’s children of their daily bread. Nope. I’m certain all they cared about was how impressed everyone was going to be with their picture perfect loaves of bread. Here’s an idea. If you are bored and want to learn new skills, why don’t you learn how to garden and impress everyone with your tomatoes? Or how about learning how to sew to make masks for hospitals and first responders? I know, learn to crochet so you can make those cute market bags for when you go to the farmer’s market. But, please, please, I’m begging you, stop baking bread.

Um, no. I could argue so many points on this, but I’ll just let these incredulous responses on Twitter do it for me:

I can’t bake, but by god I will learn if it means Caren White will be deprived of bread

Caren White is the most Karen of Karens by definition.

The elitist notion that others must stop baking bread so she, who has the privilage of TIME & MONEY to make everything she eats from scratch, can find her ingredients is tone deaf classist bs. 🙄🍞
https://t.co/yRSPUVXPHk

Also, if Caren is *that* into baking her own bread, and doing it all from scratch… why has *she* not started doing it from her own grain?
She’s a master gardener–she’s presumably got garden space, AND the skill…
Wheat is one of the fastest crops you can grow, 25-50 days.🤔🤨

What bugs me MOST about the Caren bread drama… is that she describes herself as an avid baker.

I’m an avid baker, as of March 1st I had 75 lbs of flour in my pantry. I have not needed a restock. Get on my level, Bitch.

When we really said Karens are Karens they said we were trifling now look at Caren doing Karen things 🤦🏾‍♀️ telling us we shouldn’t bake bread pic.twitter.com/mcHaHkXt0o

This woman wrote an entire essay about how she only eats organic and only cooks from scratch and that means you don’t deserve to have access to healthy foods. It’s a truly mind boggling lack of self awareness that only someone named Caren White could have. https://t.co/AlQ4OG11cZ

Yeah honestly with a little elbow grease and deep Google searching I was able to eventually fins quite a bit of flour.

Ok but my favorite part is that she wrote this piece a couple days before the bread one pic.twitter.com/DGlaCL0l68