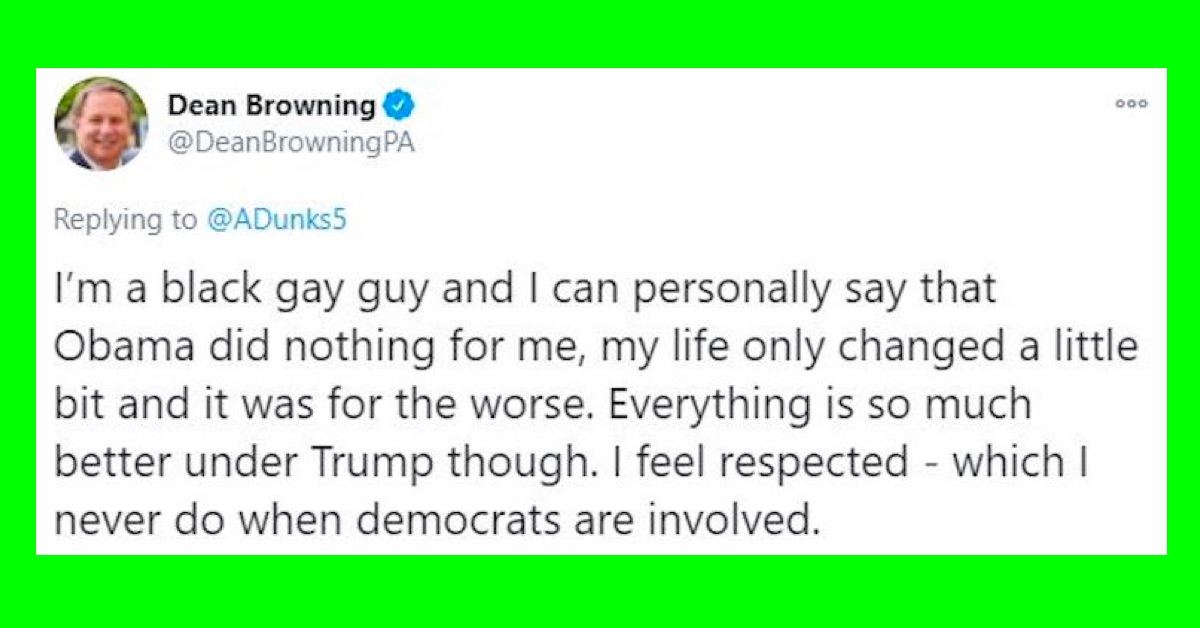 Republican Dean Browning ran and lost in the 2020 Republican primary for US House Pennsylvania District 7, but he will not be forgotten. In a week, hell, in a YEAR, of unprecedented absurdity and world-shattering events, Browning has still managed to stand out. He may even have eclipsed Four Seasons Total Landscaping.

It all started with a tweet from Browning, in which he claimed, “What Trump built in 4 years, Biden will destroy in 4 months.”

What Trump built in 4 years, Biden will destroy in 4 months.

Browning is a big Trump stan. He’s also white and straight and a conservative Christian. So, when he replied to a tweet saying, “You mean what Obama built in 8 years,” with this tweet reply, it was a bit confusing: 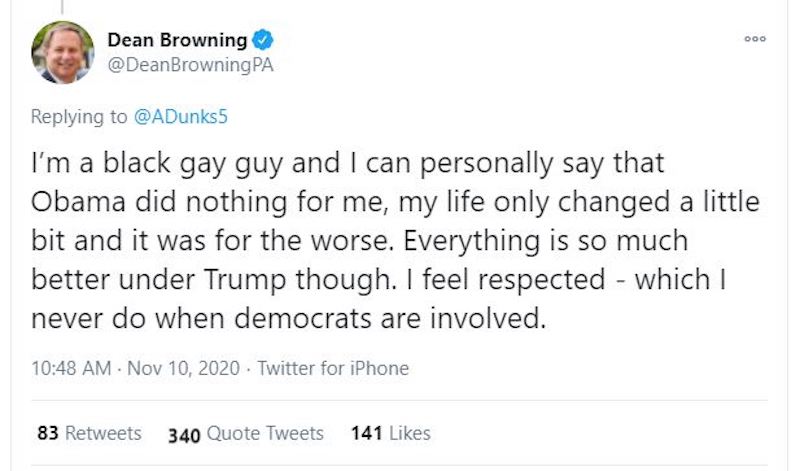 “I’m a black gay guy,” Browning wrote in the now-deleted tweet, “And I can personally say that Obama did nothing for me, my life only changed a little bit and it was for the worse. Everything is so much better under Trump though. I feel respected – which I never do when democrats are involved.”

Occam’s razor suggests the simplest explanation for this tweet is that Browning has a fake account he uses to pose as a “black gay guy” who agrees with all of Browning’s racist and awful ideas, and he forgot to switch accounts before doing so this time. This theory seemed to be confirmed when folks found a Twitter user named Dan Purdy who seemed to reply to a lot of Browning’s tweets by self-identifying as a “black gay guy.”

so from googling it would appear @deanbrowningpa's black guy identity "Dan Purdy" was also once used on the suspended account @soulcookie322. but before that account became Dan Purdy, it was a white guy named "Pat Riarchy" and "White Goodman". dean is really something else pic.twitter.com/gFkUPkNDPV

All of this would be weird enough on its own, but this year, everything gets weirder. After deleting his original tweet, Browning tweeted that what he tweeted was actually a message from a Black gay guy who wanted people to know that he doesn’t like Obama.

Regarding the tweet that is going viral from my account — I was quoting a message that I received earlier this week from a follower.

Sorry if context was not clear.

Many people won’t say it vocally, but do in private.

Soon after that, a Black man did release a video on Dan Purdy’s account saying he was the guy trying to get Browning to share his message. Then, Purdy’s account was suspended for violating some Twitter policy, perhaps impersonation, because the man in the video is actually a man named Byl Holte. The son of Patti Labelle:

10/ I SALVAGED THE VIDEO. Here is Byl Holte, Patti LaBelle’s son. aka not at all Dan Purdy pic.twitter.com/QGcPMK3HZT

So, what is happening? No one is entirely sure. Once again, Occam’s Razor says the original theory about Browning’s dummy account is true, but it does seem like he has some sort of personal relationship with Holte that would lead to him being willing to make this video. Possible he’s the only Black man Browning knows? The mystery has consumed and titillated the Internet:

the video tweeted by William Holte from Dan Purdy's account and that was quote tweeted by Dean Browning has been removed because the Dan Purdy account has been suspended. so here's the transcript: pic.twitter.com/5CLXI2cgCT

I HAVE SOLVED THE CASE.

This is a tour inside Patti Labelle’s house.

The painting may look familiar to you.

It feels like there should be a conclusion to all of this that somehow makes it make sense, but sometimes things are just delightfully chaotic. Much like this classic Christmas video of Patti LaBelle singing at a tree lighting ceremony with no backup singers or cue cards:

Forget waiting after all. Today is a holiday. Please enjoy this video, the sharing of which every year is truly one of my most beloved Christmas traditions. pic.twitter.com/GdL5Etnn4c

More people getting called out on social media: