One woman on Twitter is catching some serious heat after posting a tweet meant to signal how “not like other girls” she is by promising to take care of her hypothetical future husband.

call me old fashioned, but i was raised to take care of my husband

make his plate every night, wash his work clothes for him, make sure he’s up for work the next morning, always have a clean house for him to come home to, etc.

and that’s exactly wife i will be

“Call me old fashioned,” wrote @brylealangley, “but I was raised to take care of my husband. Make his plate every night, wash his work clothes for him, make sure he’s up for work the next morning, always have a clean house for him to come home to, etc. And that’s exactly (the) wife I will be.” 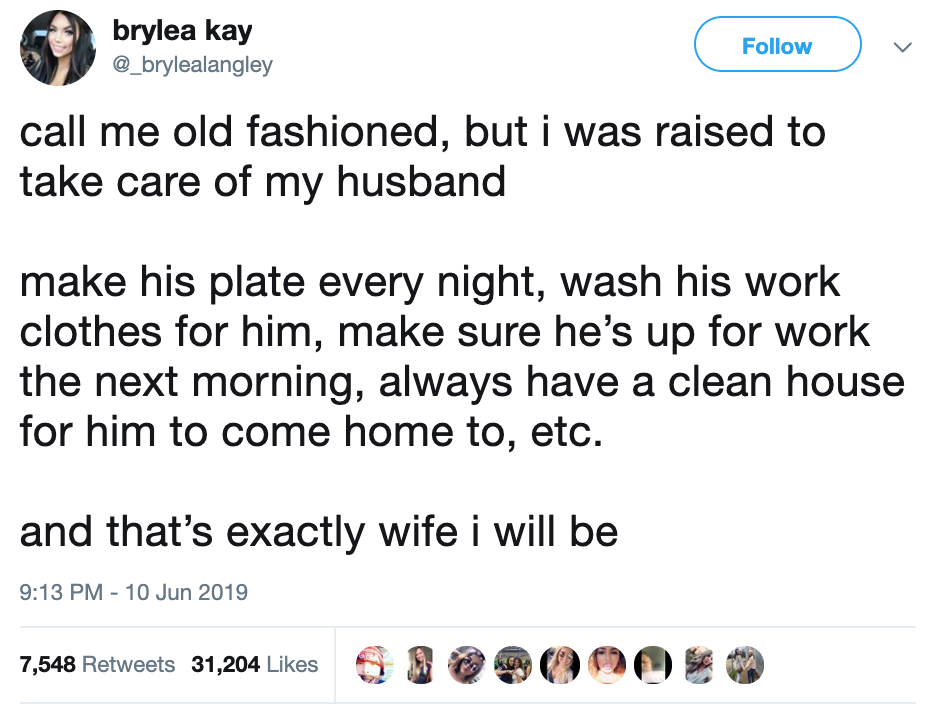 Now, everyone has the freedom to choose their relationship dynamic. But it’s one thing to choose to be a stay-at-home wife and to genuinely enjoy domestic duties, and quite another to (hypothetically) (!!!) tweet about it implying that you are somehow ‘better’ than women who do otherwise.

The immediate response on Twitter was overwhelmingly “ma’am, are you alright?” as dozens suggested Brylea Kay may be suffering from a severe case of internalized misogyny.

Translation: I’ve never had an orgasm

The notion of a wife parenting her husband is not a popular one on this platform, as we’ve learned time and time again.

So you were raised to parent your husband

You gonna change his diapers too?

one kids menu for ur husband and one margarita for the headache pic.twitter.com/PkeIFiglbV

Brylea the thing you’re describing is being a mom

One woman even weighed in about how this approach simply “doesn’t work” because it becomes “expected of you and then you just become the house skivvy.”

Hen I did all this…. it doesn’t work. It becomes “expected” of you and then you just become the house skivvy…. I left.

Others pointed out that a healthy relationship is a give and take sort of a thing, not a “catering” sort of thing.

There ain’t nothing wrong with wanting to fully take care of a future husband—there’s plenty wrong with attaching “old-fashioned” gender roles in a bid to feel supreme to other women.

I’ve been married 30 years. Marriage is a partnership, with give and take and mutual respect for each other, not one person catering to the other. Think about the model you’re setting for your daughters.

Nothing wrong with this st all if you’re a stay at home wife. But if you work too, I feel like the chores should totally be 50/50

I take care of my boyfriend since we live together, but I’m not trying to be his momma. We do all the chores together and we get up together. He’s a grown man. He knows I take care of him, but he knows he needs to take care of himself. If he works, I work. That’s how it is now.

Depends who’s working what hours and when

While many were so at loss for words, they could only muster reaction gifs.

Good luck to Brylea, who will certainly have no trouble at all finding a husband who wants the type of wife she was raised to be.