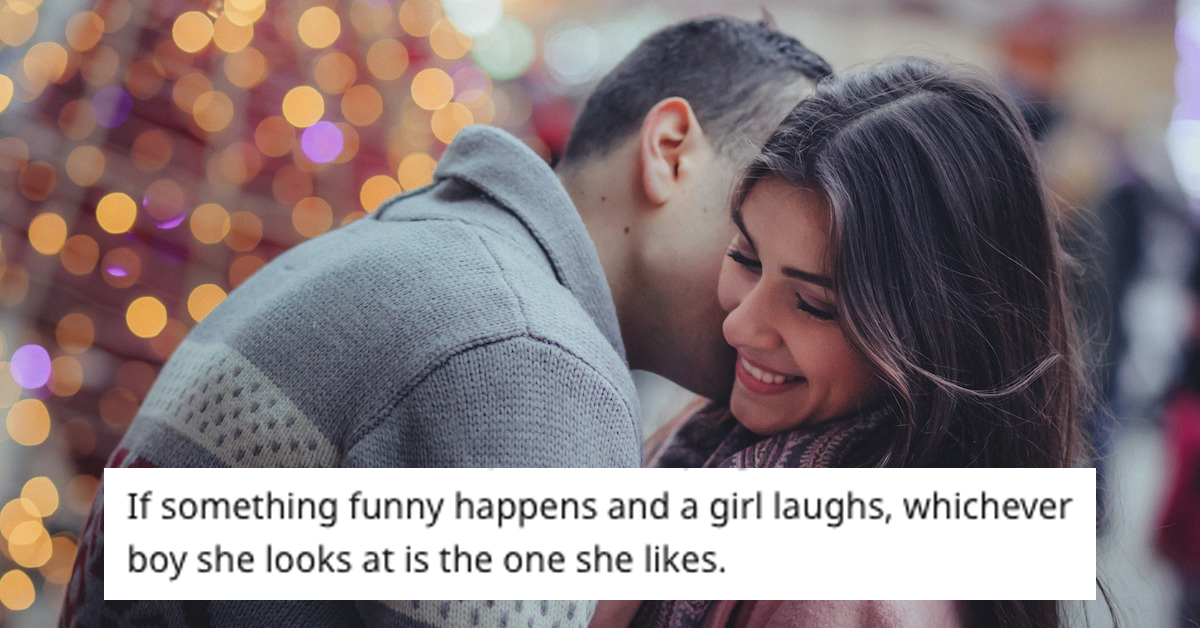 If you meet someone through an online dating site and end up going out for drinks, it’s a pretty fair assumption that you’re on a date. But with people that you meet through other avenues, it can be really hard to tell if they like you that way.

Actually, even on a date, it can still be hard to tell if the person is into you. How do you know if you should make a move? Men, especially, complain that they can’t tell when a woman is into them. Is she laughing at his jokes because she likes him or because she just thinks he’s funny or maybe she’s just straight up being nice? Is there a foolproof way to tell?

Recently, a Reddit user posted the question, “What are some signs that girls give to boys that they like them that are obvious to girls but totally not obvious to boys?” This is a great question that requires a complex answer and people on Reddit had lots of thoughts on the subject.

The top comment was by shadowrangerfs, who explained that the real issue wasn’t that men were failing to pick up signals, but that “every woman’s signals are different.”

Ok ladies. It’s not that men don’t get the signals. It’s that every woman’s signals are different. He had the same thing done by a woman who WASN’T interested in him. One woman’s flirting is another woman’s “Just being friendly”.

Unless you are literally getting naked or grabbing his dick, I guarantee that your “obvious signal” has been done to him by a woman who wasn’t interested in him.

Every time this topic comes up on reddit, I post this same thing. I hope that one woman will read it and realize that maybe the guy that she’s sending signals to has had the same thing done by women who weren’t interested. Then she’ll “man up” and just ask the guy out.

A lot of men said they basically ignored any signals they thought they might be getting for fear of seeming like a creep.

Yup. If there’s anything that guys fear more than getting rejected, it’s being “That Guy”: the guy who misunderstood friendliness as flirting, tried to make a move and now everything has gotten awkward…—N2nalin

Unless someone specifically tells me they like me or something I just assume they’re being extra friendly and wouldn’t want to mistake that for flirting and fuck everything up.—Hartknockz

It isn’t that we are bad at it, it’s that we don’t want to be labeled a creep or a stalker in case we are wrong.—nekro_24

100% agree. Also to add on to this, because every woman’s signals are different, even when you are reasonably sure she’s flirting with you that slight doubt makes it really scary to take things further. There’s a lot of pressure on dudes to not get rejected and having the onus on you to be the first to put your feelings in unambiguous terms is scary. You can always pass a hint off as being friendly whereas you can’t pass off “do you want to go out with me some time?”.—UnaeratedKieslowski

I think the problem is that guys don’t want to misinterpret things so we just don’t interpret them at all. If we tried to figure it out, we’d drive ourselves crazy. We don’t want to come across as creeps and lose potential friends or make a friend-group weird.—theslyturtle

People shared stories of times that they weren’t sure how to read the woman’s actions.

I completely agree. I remember meeting this girl at a party and we started chatting for a bit, having a laugh, and I remember her laughing at one of my jokes and touching my arm. I thought this was great she must be in to me. A couple of my friends come over and she did similar arm touches with them.

I have heard girls before say that physical contact like that is a sign that they like a guy but for her it was just a part of who she was and how she interacted with people.—OddyseeOfAbe

I went out for lunch with this girl I liked and when we arrived back at school she asked me “how do I tell a guy I like him”, I had a crush on her and so I told her to be the most direct possible because if she didn’t, there was a chance he wouldn’t get it. 1 week later she told my best friend she liked him, they’ve been together for over a year now I’m happy for them :)—SunTzudo

Some married men revealed that they still couldn’t read their own wives’ signals.

Not a damn clue, my wife’s friend had to come tell me she was into me for me to even begin to notice the flirting.

My wife tells me sometimes “You know she was flirting with you right?” Me: “no she wasn’t” Wife then proceeds to imitate other woman Me: ….. Wife:….. Me: “wow I’m fucking slow” Wife: “And that’s why I don’t worry about other women”—Fourtires3rims

My wife says the same thing. After 8 years she has started being blunt, because her signals i still dont get.—lostaussie69

So one user suggested that women be absolutely as direct as possible.

Trust me, gals, boys are dense. To get through to a dude, you gotta just tell him. No playing with your hair. No laughing too much at his jokes. No putting your fingertips on his arm. Just be straightforward with it.

Boys are SUPER bad at reading between the lines.—hardestnuts

One girl replied that being direct is the route she takes. It might be awkward, but it doesn’t last forever (although it does sort of last forever in that you’ll probably replay the moment of rejection in your head for eternity, but whatever).

Am girl, and tbh my approach is pretty much this:

“So I really like you. And I thought I’d let you know that if you feel the same and were to try to make a move, it’d probably be received favorably, but if not, forget I said anything. I’ll never bring it up again.” Then apologize in for potentially making them uncomfortable.

It’s awkward for like one minute, but I’m oblivious (bc I assume no one could ever possibly find me appealing in any way), and if he is also oblivious/worried about being a creep, it lets him know in no uncertain terms that the ball’s in his court. But if he’s not into it, you absolutely genuinely have to never allude to it again in the slightest.—mickier

And someone did post some really helpful advice about how to tell if someone likes you, male or female.

If something funny happens and a girl laughs, whichever boy she looks at is the one she likes.—SomehowStillAwake

That’s not proof, of course, but it is one signal you can at least look for in a sea of confusion.