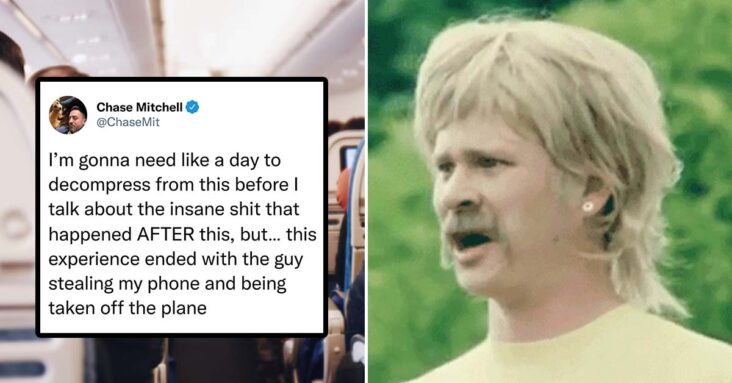 If you’re not following him on Twitter already (which you should be), allow me to introduce Chase Mitchell, an Emmy-nominated writer from The Tonight Show With Jimmy Fallon, and a former colleague of mine at someecards.

This week Chase shared the truly insane Twitter thread about his recent American Airlines flight to Philly from LAX. At press date, the thread has over 15k likes and retweets and is quickly going viral.

Now, obviously, airline travel is rife with crazy passenger stories, but this one is definitely top 10% crazy.

I’ll just let you take it all in though.

And here’s the rest of the Twitter thread (which I’m just going to copy & paste because it’s pretty hard to sum up otherwise:)

He and his wife (oh by the way, Window never showed up, so she’s sitting in here too) are three rum and waters in. Not like they’re mixing rum and water, like they’re shooting mini bottles of rum and chasing it with water, and complaining about the airline’s headphone policy

I’m gonna need like a day to decompress from this before I talk about the insane sh*t that happened AFTER this, but… this experience ended with the guy stealing my phone and being taken off the plane

“Alright f*ck it I’m waiting on an Uber so I’ll start. Some context – I flew LAX to Philly for a friend’s wedding. American Airlines. I didn’t bring my laptop, so my phone is all I have – numbers, my hotel reservation, the NAME of my hotel, everything. That will be important later

Then all that sh*t above happened. I’m thinking, these are the worst people I’ve ever flown w/, but w/e. I’m being polite (while tweeting about it). I’m watching Scream. Meanwhile like I said they’re both 3-4 rums deep. I notice he starts having outbursts, yelling “f*ck,” etc

This is one of those planes w/o screens behind the seats, so I’m watching the movie on my phone. I notice they’re both kinda weird about it – she asks how I have the internet, like she’s unfamiliar with plane Wifi. Whatever, they’re both older, I don’t think much of it

Back half of the flight, he’s having more outbursts, Yelling “F*ck! I feel sick!” and stuff. He needs to get up and out of there VERY fast, so I get out of his way. After a long time, he comes back to his seat. Right when we’re all back situated, he IMMEDIATELY needs to go again

Each time I’m standing up to let him out, I’m making sure to unhook my phone from the seatback and put it back in my pocket. Meanwhile, these people have annoyed the f*ck out of me in every different way, but they keep saying sorry and I keep saying “it’s fine, no worries”

Every time he sits back down, he’s really performative a/b how sick he is – keeps yelling “I THREW UP 3 TIMES” and sh*t. Finally, closer to landing, he needs to go a THIRD time. This time he’s straight up rude about it, like, “I GOTTA GO NOW, GET THE F*CK OUT OF THE WAY”

This time was so urgent and violent I had to get up without having time to think about it, and when I sit back down, I can’t find my phone.

So anyway while he’s gone again I am looking EVERYWHERE – I literally just had it. I feel around under the seats, pull the cushions apart, etc. I ask his wife if she’s seen a phone – no answer. I figure she didn’t hear me, ask again. No answer

This is around when it dawns on me 1) how absolutely f*cked I would be without it, how few numbers I know anymore (like I said, I didn’t even commit to memory the name of my hotel) and, 2)… I think that f*cking guy took it?? It feels like an INSANE accusation to even think of

I start panicking and go talk to the flight attendants. First we’re just commiserating about the couple – they’ve been putting up with their sh*t too – and one of the FAs casually says, “Yeah the guy told me he thought you were like, using your phone to plan something. He’s nuts”

This by the way, is so weird. Other than needing to urgently run to the bathroom and yelling a little, he has not been outwardly hostile to me at this point. Like I said, he was apologizing for getting up so much, and in fact, I’d just taken their picture for them w/*their* phone

So what that FA tells me is WILD. I tell him, “well that’s really interesting because I cannot find my phone anywhere.” I hesitate to make an accusation – like I said, it still feels like an insane thing to think happened. They both go check the seat with flashlights. Nothing.

Another passenger who didn’t hear our conversation discreetly sidles up to me and says he SAW the guy yank the phone out of the seat on his way to the bathroom. Now I realize how long the guy has been in there this time, and I’m like, “F*ck”

My mind is jumping to even crazier places – that dude has my phone (now, I’m sure), and now it’s more like “What the f*ck is he doing in there with it.” I start worrying he’s trying to flush it, or cram it in a trash can, or just f*cking smash it. I mean WHAT IS HIS PLAN

He finally leaves the bathroom and goes back to his seat. And the FAs and I are looking at each other like “Well what now.” One of them says, “…you could… ask him?” Sounds like a bad plan! They ask if I have an Apple Watch. I don’t. But I do have my AirPods

I realize if I put them in my ears and the phone is close by (and, please for the love of god, still working), I’ll hear the sound it makes when they connect. So I put them in… and they do

So all that’s left to do now is ask the guy. The FAs approach him first, and he denies it, plays dumb, pulls out his phone and says it’s all he’s got on him. So, with pretty much nothing left to do, I sit down back next to him, and I ask him myself

He again, denies it, a little more frantically this time. Without naming or pointing out the other passenger who told me, I tell him that someone told me they saw him do it. He demands to know who. I realize this may have been the wrong approach

By now everyone around us knows what’s going on, and that’s not helping either, because it’s hitting the conspiracy part of his brain. He starts thinking there’s some plot afoot. Next to me, very quietly, a dude I am very sure is an air marshall says, “I can help if I need to”

So he starts pointing to various people and accusing them of being in on it. He says the air marshall’s bag has been flashing green (it has not) and that I’ve been sending signals out from my phone the whole flight (he’s still not admitted having it – a slight flaw in his logic)

So basically we’re at a standstill – I’m still panicking where and in what state my phone it is – and quietly it’s made clear to me that this guy will be escorted off and patted down when we land. Also, in all of this – we’re about to land and… I gotta find a new place to sit

So i sit next to a very nice man several rows up who’s basically like “hey, what’s goin on back there?” Like dude, not now. I sit through the most intense landing of my life. And I have this intrusive thought: what if the f*cking lights come on and it’s under my seat or some sh*t

LUCKILY, that does not happen. The man is taken off, and then a few minutes later, another air marshall or cop-adjacent guy comes on and asks me to come to. I’m like “Sh*t, am I… in trouble too somehow?”

I get out to the jetway, and the guy is standing there, and now he’s changed his tune from “I didn’t take it,” to, “If you check his phone, it will tell you everything.” They ask him to empty his pockets, he does, and I immediately, blissfully, see my Lock Screen flash on

They (being thorough) are like, “Can you unlock it?” and I’m like “well as a matter of fact my literal face does that.” I do, it does, they hand it back. He keeps demanding they check it for… spy stuff I guess? They obviously do not. All they would’ve seen is the end of Scream

They ask me if I wanna press charges. I don’t – I think the guy is unwell despite the fact that he has really really f*ckin annoyed me tonight and he needs to drink less rum on airplanes. I hope him his wife had a terrible ride home.

Was this just a drunken thing? Is this guy mentally ill? Both? Honestly not sure what to think of all this other than: