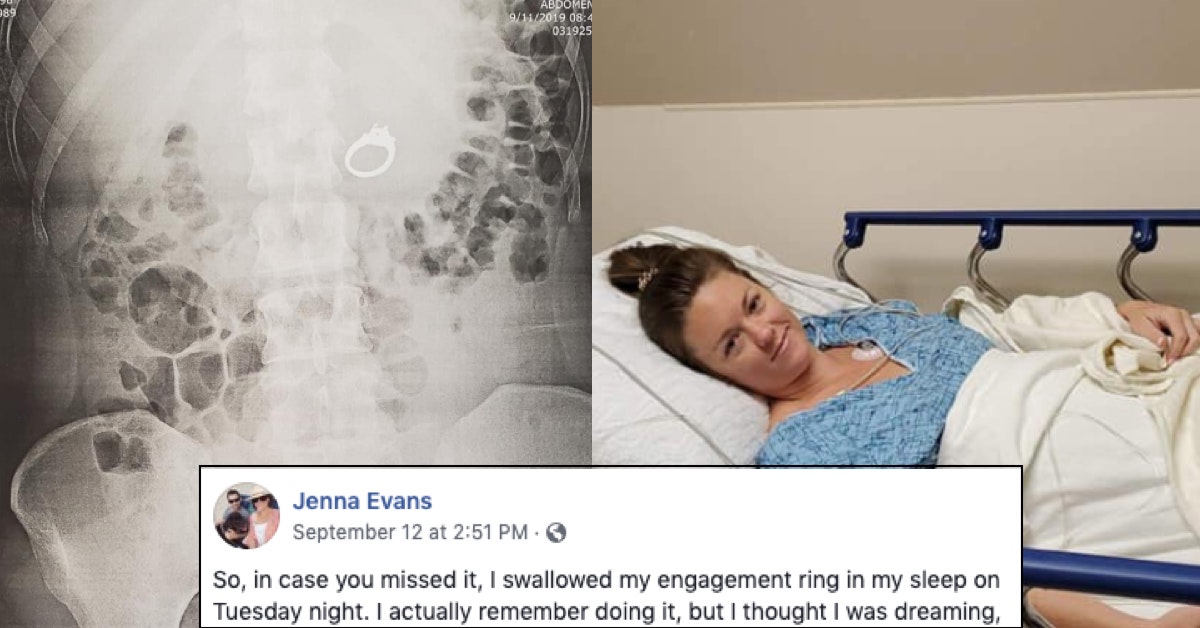 Losing an engagement ring is a total nightmare, but in the case of a woman named Jenna Evans it was a literal nightmare. Evans posted her story to Facebook and it quickly went viral. Probably because it made thousands of people scream, then take their rings off every night, placing them far, far away from their mouths.

So, in case you missed it, I swallowed my engagement ring in my sleep on Tuesday night. I actually remember doing it, but I thought I was dreaming, so I went back to sleep. On Wednesday morning, I realized my ring was not on my hand and had to wake Bob Howell up and tell him that I swallowed my engagement ring. I don’t think he believed me right away. We laughed pretty hard for about an hour and a half, called my mom, laughed until we were crying, googled ‘do other adults swallow rings” because kids do it all the time, but apparently it’s less common for adults.

No kidding! Can you imagine swallowing the most expensive piece of jewelry you own, the one you associate with one of the greatest moments in your life, and know there’s a chance it will either kill you or come out your butt? That’s so much worse than losing it down the garbage disposal.

Evans went to urgent care, and said it was hard to explain what happened because she was laughing and crying so much, but eventually she got an x-ray. Lo and behold, the ring was inside her:

The ring was in her stomach and a gastroenterologist on call decided it wasn’t wise to “let nature take its course.” Evans was also told to see a sleep specialist—I guess there’s a cure for eating diamonds in your dreams. Evans said the ring was starting to actually hurt quite a bit:

They decided an upper endoscopy was just the thing and said don’t worry its not big deal, but please sign this release form just in case you die. Then I cried a lot because I would be SO MAD if I died. I waited a long time for that damn engagement ring and I WILL marry Bobby Howell DAMNIT. So they push the sleepy drugs, and right as I started to feel that wave of warm and fuzzy sleep I said to the doctors, Bobby would LOVE this. Everything went great, they found my ring just beyond my stomach in my intestines, retrieved it and gave it to Bobby, not me.

Her fiancé finally gave her the ring back and they’re still getting married!

But what everyone really wants to know is what exactly Evans was dreaming about that lead to this turn of events. She edited to add that detail:

For inquiring minds, I was having a dream that Bobby and I were in a very sketchy situation involving a high speed train and bad guys (I have very exciting and vivid dreams) and he told me I had to swallow my ring to protect it; so I popped that sucker off, put it in my mouth and swallowed it with a glass of water riiiight about the time I realized what I was doing. I assumed this too was a dream, because WHO ACTUALLY SWALLOWS THEIR ENGAGEMENT RING, so I went back to sleep.

She also added that she didn’t realize folks would love this story so much, but offered the name of her jeweler for a little free publicity:

I also had no idea this would go viral – please be kind. I didn’t do it on purpose and I’m not trying to change the world here, just share a funny story and hopefully a good belly laugh. Pun intended.
Ring is lovingly made by Simone Jewelry Designs in Houston, Tx. Jewels so lovely, you could eat them. But dont – trust me on this.

Excellent advice for someone who has now been through it all, engagement ring-wise.