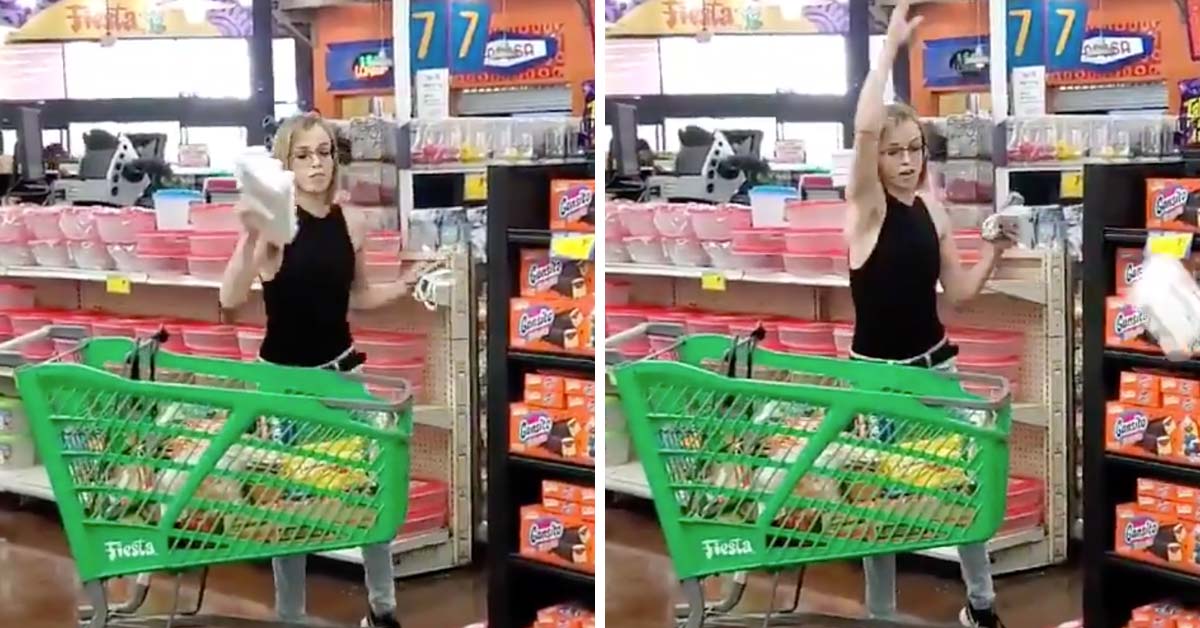 As wearing a mask becomes stupidly politicized, people are throwing fits—for the absolute wrong reason. I could see myself walking into a grocery store, seeing none of the employees wearing a mask, and sinking down to the floor in panicked tears—but this “lovely young Karen” decided to throw groceries all over the place because she was simply asked to put a mask on. Now, footage of her meltdown has gone viral.

The woman, who is unnamed, lost her damn crap shopping at what appears to be a Fiesta Market grocery store in Dallas, Texas.

This particular woman’s tantrum comes on the heels of another white woman’s fit over being told to wear a mask in a California Trader Joe’s (dubbed Trader Joe’s Karen).

The blonde woman in the video was asked to put on a mask at the checkout line but instead started screaming and throwing the groceries her cart out onto the floor. Folks noticed that she was actually holding a mask in her hand, but instead of just putting it on, she decided to wreck the grocery store.

On social media, people were perplexed at what they saw as a display of white privilege and disregard for others.

She’s literally holding a mask in her hand. Instead of putting it on she instead decides to throw groceries on the ground for staff to clean up.

Just imagine white Karen here ranting and throwing such a tantrum was a BLACK WOMAN. Guaranteed a PD Swat Team has been deployed and waiting for her in the parking lot. The odds at 50/50 chance of survival.

She has a mask in her hand, but instead of wearing it, she is destroying store property, making a mess for staff to clean up and causing a disturbance where other customers could be injured. If a Black or brown woman acted out in this way, law enforcement would have been called.

White women are having quite a moment. It isn’t pretty.

Don’t be a Karen. Wear your mask in the grocery store. Don’t throw your groceries all over the place.