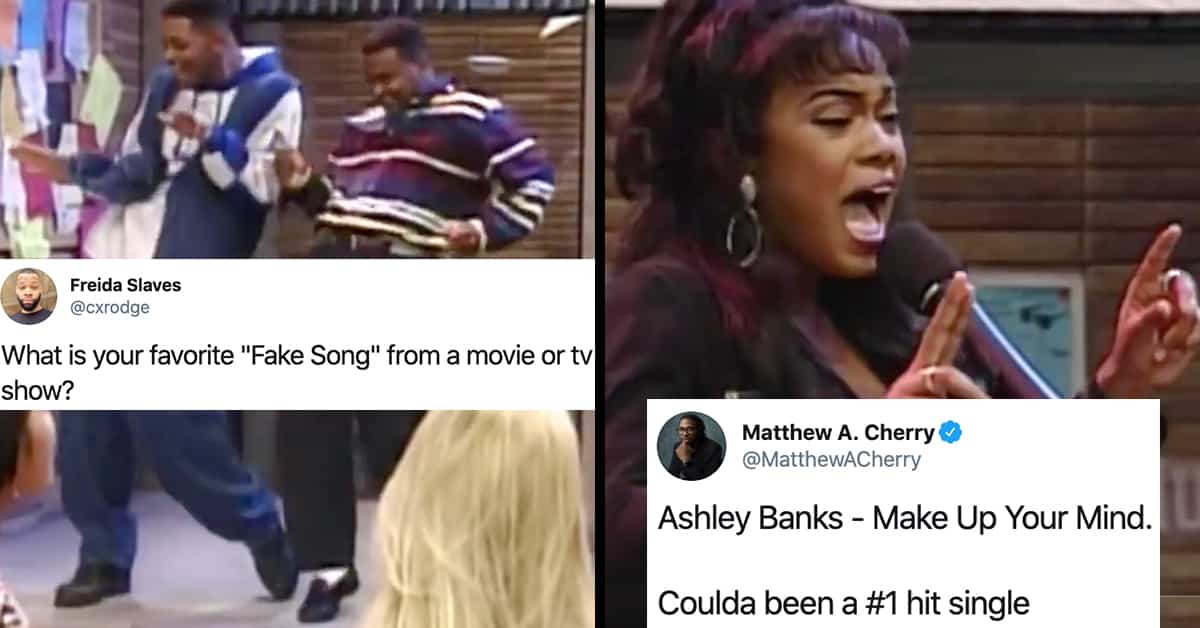 Movies and TV shows are often full of amazing songs, but unless they get nominated for a big award, they kind of get lost in the fray. Especially TV shows. What would be an absolute hit on an album never gets released or played on the radio, or gets treated as a throwaway joke. So, we must thank Twitter user @cxrodge for giving “fake songs” their due and giving everyone an opportunity to share their favorites.

What is your favorite “Fake Song” from a movie or tv show?

In response to their question, Twitter was flooded with clips of all the bangers and bops that we grew up with on TV but can’t really find on Spotify. After scrolling through, I NEED this playlist. TV songs are just a little bit weirder than what officially makes it out of the studio, and therefore more fun. Plus, they’re connected to characters and scenarios that stir the imagination. Wow. I’ve really talked myself into loving fake songs. See if the same thing happens to you:

Ashley Banks – Make Up Your Mind.

Coulda been a #1 hit single

nothing can ever even come CLOSE to The Stiff Dylan’s SMASH HIT https://t.co/slTgeT3d8h pic.twitter.com/jJxe9Itjhi

socks with sandals is forever a banger don’t @ me https://t.co/zBt7oDeGfF pic.twitter.com/5LjzCmluga

i raise you this banger pic.twitter.com/DvuT1m0g3m

Honestly every song from Star but this one right here! @wordtoJude did what she had to do pic.twitter.com/yKZX2svXla https://t.co/VnnXSZTAQH

Facts Steve had all the hits. pic.twitter.com/KGvMzrsYDZ

Who didn’t sing along to Freestyle Unity’s “Mama Killed Him” https://t.co/fhOIy80xOk pic.twitter.com/gyDKa46VPM

Rest of My Life. @BrunoMars needs to release this so I can play this at my wedding pic.twitter.com/g4uTEOPLDG https://t.co/o32WPai0sG