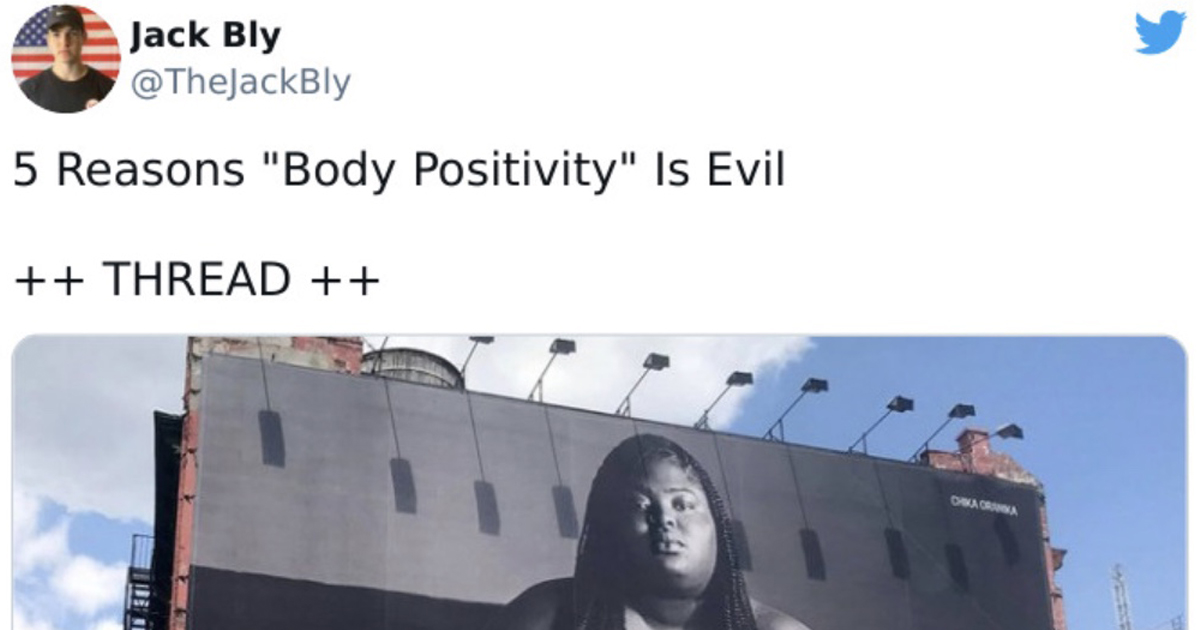 Jack Bly hit a chord with people on Twitter after he shared reasons he believes the body positivity movement is “evil”.

Body positivity encourages people to find health at any size, accept their flaws, and be happy with their body. Some people, however, find fault with that, saying it can promote excuses for unhealthy behaviors.

Jack’s views fall more in line with the latter argument, though it’s important for us here to point out that body health and fitness are very, very nuanced areas of science. They aren’t black and white, they’re highly individualized, and your absolute best bet is to speak with a Registered Dietician about eating habits. Anything that boils down to an easy hashtag or slogan is probably not going to be very helpful.

Jack spoke to Bored Panda for a little clarification. He explained, “When it comes to TRUE body positivity, I think it can be a good belief system for things regarding our appearance that may be out of our control.” So in short: there are SOME people it’s good for.

“But, it is a terrible belief system when it comes to things in your control,” he said, specifically citing obesity. “Like I mentioned in my thread, a lot of misinformation has been thrown around due to this which is extremely detrimental to everyone.”

Jack starts by saying that the movement is born of misinformation. He says that health does NOT come at every size, that obesity increases your risk for several diseases.

It’s probably worth pointing out here that Jack Bly, as far as we can gather, is not a medical professional. He’s also a man commenting on women’s issues and dunking on advertisements women have been asking to see more of for DECADES—remember the early 2000s, guys? When we all had to be the size of a pixie stick?

Now he pulls out the super argument: “won’t somebody please think of the children?” Thanks, Helen Lovejoy.

Citing random things you think happen? Why are we listening to this guy?

Here he talks about how it’s unethical to embrace body positivity.

Jack told Bored Panda that change is simple, just “invest in a coach.” Great, thanks dude.

“Countless studies show the power of accountability when it comes to achieving any goal. And we know that where we invest our time & money reveal our true priorities. If you want an area to improve you MUST invest your resources there. And, just know that EVERYONE is capable of achieving the body they can be proud of,” he added.

However, once again, this is a topic of nuance. Trainer and physiotherapist Paulius Lipskis spoke to Bored Banda and said:

“Somebody could potentially use the body positivity movement as an excuse for their unhealthy habits, however, if the movement encourages you to accept and embrace yourself, it’s something that you should strive to follow.

“It’s also a problem if you view healthy living as something that you’re forced to do. If you’re constantly angry, tired, and you’re low on energy—it’s an issue.”

One health care professional DID comment on Jack’s thread; I find his or her input more valuable than some random guy’s, so here you go:

Thankfully, a lot of responses were critical: