It’s April 2020, and we are trapped inside due to a global pandemic. There’s a lot about the current reality that’s hard to explain, but is anything as difficult to make sense of than the hatred and disgust directed at this giant baby?

The baby is the child of TikTok user @kat.027, who probably didn’t know that their child would become a Twitter sensation in the worst way when they started posting video clips of their daily life on TikTok. The most famous one is of the baby jumping on an adult’s stomach in a diaper. And yes, it looks enormous. Twitter user @DuckAlertsNOW shared the TikTok with the caption, “Is anyone else just absolutely REPULSED by this giant baby.”

is anyone else just absolutely REPULSED by this giant baby pic.twitter.com/0Un7QQ4kZF

this baby comes up and slaps your girls ass wyd

Okay, according to Insider, the baby—named “Gav”—is not a baby. He’s a three-year-old toddler, who has an unfortunate haircut and is wearing a diaper for some reason. His baby-ness is kind of an optical illusion, one I will admit is a bit unsettling. Birthing a baby that big would be terrible. It seems unlikely that an actual infant would be so aware and able to hold up its own head like that.

Gav’s mom, responding to a TikTok comment on a video of her son playing with some blinds, explained that he is “a healthy 3 year old,” and that “The drs [sic] are predicting he’s going to be at least 6’3.” In another comment, she clarified: “We have tall boys in the family.”

Still, the idea of an impressively giant baby really captured people’s imaginations, inspiring more tweets than would be directed at a child in better times. Now no one has anything to do besides dunk on a toddler:

Well son, I guess it’s time to tell you the truth. When you were a baby, you were huge. And hundreds of thousands of people on the internet wanted to skin you alive

Ok, the age of the giant baby is SO ambiguous I have to figure this out. pic.twitter.com/7PD6FzTv38

Everyone else is too much of a coward so I’m stepping up. I will fight the giant baby

This baby is fucking giant and is laughing over the body of their recent victim??? I stan pic.twitter.com/pOhPAkqIlF

wish I never saw that video of that giant baby pic.twitter.com/xPJp1tAify

Everyone’s talking about a giant baby, you folks see this? You hear about this giant baby? So naturally I’m like, “Oh boy, what did the President say this time!” We have a great show tonight, American Hi-Fi is here

me: why is every body tweeting about a giant baby w… pic.twitter.com/EqDSrh9fAW

wishing i could turn back the clock to 10 hours ago, before i knew about the giant baby

this is the exact frame where the giant baby goes beyond the pale. babies do not sit like that. that is the pose of a pub geezer inviting a barmaid to sit on his lap. pic.twitter.com/lcO1OsD1tS

i fucking hate the giant baby

the man laying under the giant baby actually passed away shortly after this was taken from internal bleeding 🙁 pic.twitter.com/AvJR2IfFPj

future generations will ask “And do you remember when the oil price turned negative? Where were you?” and i’ll tell them i was on the computer watching the giant repulsive baby on twitter

imagine being a baby just living ur simple baby life ur brain is so smooth u don’t even know what object permanence is yet literally all u know is eat sleep and shit urself and yet still scaring the shit out of other ppl bc ur also a giant? i want what he has

Another unfortunate side effect of this is that the baby and parents are now getting a lot of attention on TikTok, including criticism about how the baby is being parented, why he’s wearing diapers, and what exactly they’re feeding him to make him so enormous: 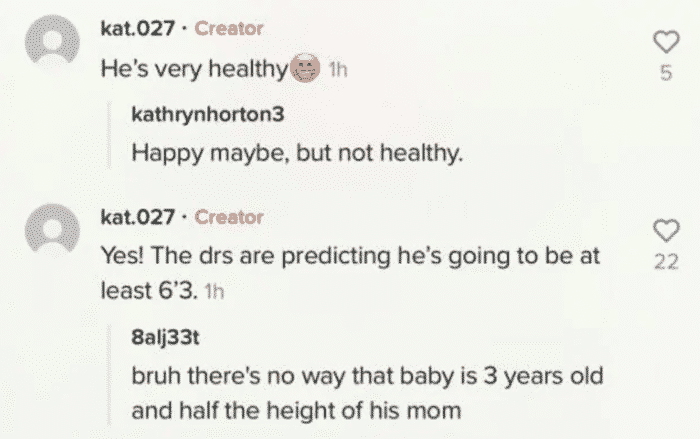 I can’t believe I have to write this, but leave the baby alone. He’s! A! Baby!